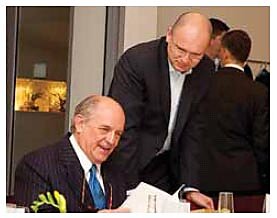 Richard Sulik, the father of Slovakia’s flat tax reform, gets his copy of Losing Ground autographed by Charles Murray at Cato’s May 2010 conference in Bratislava.[/caption]Richard Sulik, who participated in a Cato Institute conference on economic reform in Slovakia in 2010, just before the elections that made him speaker of parliament, is making headlines this week as an opponent of the European bailout plan. Modest‐​sized Slovakia can play an outsize role in the debate because “under the rules governing the 17 nations that share the euro, an expanded rescue fund for Europe’s ailing nations and troubled big banks must be approved by the parliaments of every country in the currency union.” The Washington Post notes:

European leaders, for instance, did not count on one Richard Sulik, a dapper 43‐​year‐​old who is the speaker of parliament in this quaint capital nestled in the foothills of the Carpathian Mountains. Sulik’s Freedom and Solidarity Party calls the plan an unfair bailout of profligate Greeks and fat‐​cat German and French bankers that poor Slovaks can’t afford.

The Financial Times calls Sulik “one of the last of central Europe’s true believers in economic liberalism.” The Wall Street Journal describes him as the father of Slovakia’s flat‐​rate tax and a “free‐​market libertarian” and says that his party

won 22 seats in the Slovak 150‐​member parliament, making it the legislature’s third‐​largest party. It got there after campaigning for low taxes, a lean government, legalization of soft drugs, marihuana in particular, allowing same‐​sex civil unions and abolishing fees levied on all owners of television sets to finance the public broadcaster STV.