I'm not reluctant to criticize my friends at the Heritage Foundation. In some cases, it is good-natured ribbing because of the Cato-Heritage softball rivalry, but there are also real policy disagreements.

For instance, even though it is much better than current policy, I don't like parts of Heritage's "Saving the American Dream" budget plan. It's largely designed to prop up the existing Social Security system rather than replace the existing tax-and-transfer entitlement system with personal retirement accounts. And while the plan contains a flat tax, it's not the pure Hall-Rabushka version. One of the most alarming deviations, to cite just one example, is that it creates a tax preference for higher education that would enable higher tuition costs and more bureaucratic featherbedding.

That being said, I'm also willing to defend Heritage if the organization is being wrongly attacked. The specific issue we'll review today is "austerity" in Europe and whether Senator Sheldon Whitehouse of Rhode Island is right to accuse Heritage of "meretricious" testimony.

Let's look at the details.

Earlier this month, Paul Krugman wrote that, "a Heritage Foundation economist has been accused of presenting false, deliberately misleading data and analysis to the Senate Budget Committee." Krugman was too clever to assert that the Heritage economist "did present" dishonest data, but if you read his short post, he clearly wants readers to believe that an unambiguous falsehood has been exposed.

Krugman, meanwhile, was simply linking to the Washington Post, which was the source of a more detailed critique. The disagreement revolves around  whether Europeans have cut spending or raised taxes, and by how much. The Heritage economist cited one set of OECD data, while critics have cited another set of data.

So who is right?

Conn Carroll of the Washington Examiner explains that the Heritage economist was looking at OECD data for 2007-2012 while critics are relying on an OECD survey of what politicians in various countries say they've done since 2009 as well as what they plan to do between now and 2015.

Whitehouse believed he had caught Furth and The Heritage Foundation in a bald face lie. ...There is just one problem with Whitehouse's big gotcha moment: The staffer who spoon-fed Whitehouse his OECD numbers on "the actual balance between spending cuts and tax increases" failed to also show Whitehouse the front page of the OECD report from which those numbers came. That report is titled: "Fiscal consolidation targets, plans and measures in OECD countries." Turns out, the numbers Whitehouse used to attack Furth for misreporting "what took place in Europe" were actually mostly projections of what governments said they were planning to do in the future (the report was written in December 2011 and looked at data from 2009 and projections through 2015). At no point in Furth's testimony did he ever claim to be reporting about what governments were going to do in the future. He very plainly said his analysis was of actual spending and taxing data "to date." Odds are that Whitehouse made an honest mistake. Senators can't be expected actually to read the title page of every report from which they quote. But, considering he was the one who was very clearly in error, and not Furth, he owes Furth, and The Heritage Foundation an apology. Krugman and Matthews would be well advised to revisit the facts as well.

In other words, critics of Heritage are relying largely on speculative data about what politicians might (or might not) do in the future to imply that the Heritage economist was wrong in his presentation of what's actually happened over the past six years.

So far, we've simply addressed whether Heritage was unfairly attacked. The answer, quite clearly, is yes. If you don't believe me, peruse the OECD data or peruse the IMF data.

Now let's briefly touch on the underlying policy debate. Keynesians such as Krugman assert that there have been too many spending cuts in Europe. The "austerity" crowd, by contrast, argues that strong steps are needed to deal with deficits and debt, though they are agnostic about whether to rely on spending reforms or tax increases.

I've repeatedly explained that Europe's real problem is an excessive burden of government spending. I want politicians to cut spending (or at least make sure it grows slower than the productive sector of the economy). And rather than increasing the tax burden, I want them to lower rates and reform punitive tax systems. 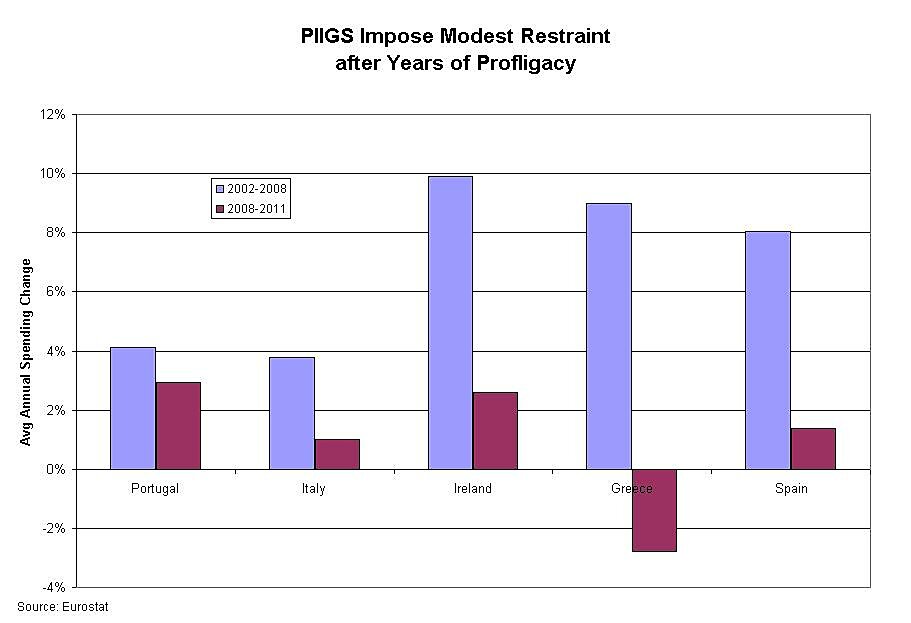 The bad news is that Europeans have raised taxes. A lot. The semi-good news is that spending no longer is growing as fast as it was before the fiscal crisis.

In the grand scheme of things, however, I think Europe is still headed down the wrong path. Here's what I wrote back in January and it's still true today.

I don’t sense any commitment to smaller government. I fear governments will let the spending genie out of the bottle at the first opportunity. And we’re talking about a scary genie, not Barbara Eden. And to make matters worse, Europe faces a demographic nightmare. These charts, reproduced from a Bank for International Settlements study, show that even the supposedly responsible nations in Europe face a tsunami of spending and debt over the next 25-plus years. So you can understand why I don’t express a lot of optimism about European economic policy.

By the way, I'm not optimistic about the long-term fiscal outlook for the United States either. In the absence of genuine entitlement reform, we'll sooner or later have our own fiscal crisis.