Show Me the Money

A number of economists have been warning about the Federal Reserve’s easy‐​money policy, but defenders of the central bank often ask, “if there’s an easy money policy, why isn’t that showing up in the form of higher prices?” Thomas Sowell has an answer to this question, explaining that people and businesses are sitting on cash because anti‐​business policies have dampened economic activity.

Not only has all the runaway spending and rapid escalation of the deficit to record levels failed to make any real headway in reducing unemployment, all this money pumped into the economy has also failed to produce inflation. The latter is a good thing in itself but its implications are sobering. How can you pour trillions of dollars into the economy and not even see the price level go up significantly? Economists have long known that it is not just the amount of money, but also the speed with which it circulates, that affects the price level. Last year the Wall Street Journal reported that the velocity of circulation of money in the American economy has plummeted to its lowest level in half a century. Money that people don’t spend does not cause inflation. It also does not stimulate the economy. …Banks have cut back on lending, despite all the billions of dollars that were dumped into them in the name of “stimulus.” Consumers have also cut back on spending. For the first time, more gold is being bought as an investment to be held as a hedge against a currently non‐​existent inflation than is being bought by the makers of jewelry. There may not be any inflation now, but eventually that money is going to start moving, and so will the price level.

I do my best to avoid monetary policy issues and certainly am not an expert on the subject, so I asked a few people for their thoughts and was told that perhaps the strongest evidence for Sowell’s hypothesis comes from the Federal Reserve’s data on “Aggregate Reserves of Depository Institutions” — specifically the figures on excess reserves. This is the money that banks keep at the Federal Reserve voluntarily because they don’t have any better options. As you can see from the chart, excess reserves shot up during the financial crisis. But what’s important is that they did not come back down afterwards. Some people refer to this as “money on the sidelines” and Sowell clearly is worried that it will have an impact on the price level if banks start circulating it. That doesn’t sound like good news. On the other hand, it’s not exactly good news that banks are holding money at the Fed because there are not enough profitable opportunities. 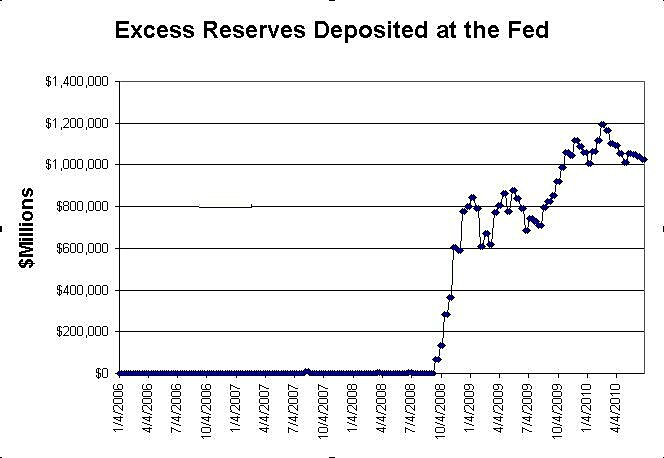 What this really tells us is that the combination of easy money and big government isn’t working any better today than it did in the 1970s.