Should We Expect Fewer Hurricanes in the Near Future?


With hurricane Arthur headlining the news as throwing a possible wet blanket on 4th of July fireworks shows along the Northeast coast and with a new record being set each passing day for the longest period between major (Category 3 or greater) hurricane landfalls anywhere in the U.S. (3,173 days and counting), we thought that now would be a good time to discuss a new paper which makes a tentative forecast as to what we can expect in terms of the number of Atlantic hurricanes in the near future (next 3-5 years).

With every storm post priori blamed on global warming (or at least being “consistent with expectations”), we thought it would be interesting to actually establish a priori what the expectations really are.

To this end, a new paper authored by a team led by Leon Hermanson has just appeared on-line in the journal Geophysical Research Letters that describes a decadal forecasting model developed by the U.K. Met Office and called, rather unimaginatively, the Decadal Prediction System (DePreSys).


Hermanson and colleagues identified the “North Atlantic Subpolar Gyre” (SPG) as a key factor which influences a variety of weather patterns from North America to Europe. The SPG is a collection of processes most readily manifest in the variability of the average sea surface temperature in an area extending in latitude from 50°N to 66°N and in longitude from 60°W to 10°W. Variability in the SPG has been associated with precipitation and temperature patterns across the in the U.S., Europe, and North Africa, as well as hurricane frequency in the Atlantic Ocean.

The relationship between the SPG and hurricanes was pointed out back in 2001 in a prominent paper in Science magazine by a team of leading hurricane researchers including Stanley Goldenberg, Chris Landsea and William Gray.  This team countered the prevailing (in the popular press anyway) and rather shrilly-delivered hypothesis that the upturn in hurricane activity which began in the mid-1990s was caused by anthropogenic global warming.  In their paper, Goldenberg and colleagues pointed out that, no, it wasn’t. Rather than global warming, the patterns of hurricane frequency were driven by naturally occurring variability in the patterns of sea surface temperature in the North Atlantic (related to the SPG).  And since this variability takes place over multidecadal timescales, conditions conducive to elevated hurricane activity in the Atlantic Ocean would be with us for a while (a couple of decades or so beginning in the mid-1990s).  Despite this explanation/warning from these prominent scientists, determined parties did not stop blaming each and every hurricane on global warming.

Now, according to the DePreSys model run by Hermanson and colleagues, this favorable hurricane environment is projected to start to draw to an end—a result of a forecasted weakening of the SPG leading to cooler sea surface temperatures in the upper the North Atlantic.

Figure 1 below shows the 5-year running average of tropical cyclone numbers in the Atlantic Ocean since 1960 along with the DePreSys model hindcasts and forecasts.  The model projects that the elevated hurricane numbers characteristic of the past two decades will fall back towards normal over the next few years. 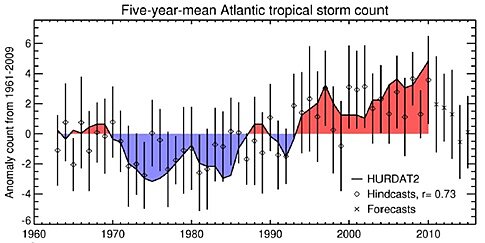 Figure 1. Tropical storm counts for storms in the latitude band 5°N-25°N in the Atlantic that last more than two days (HURDAT2 are the observations). The year indicates the central year of the five-year mean. The 50% probability spread of the hindcasts/forecasts is indicated by the vertical lines (from Hermanson et al., 2014).[/caption]

The authors note that the decline in hurricane numbers occurs as a result of a combination of internal (natural processes) as well as a bit of an influence from anthropogenic climate change—an influence which is projected to mount a downward pressure on Atlantic hurricane numbers going forward.

Now we know—a near normal numbers of hurricanes for the next couple of years would be “consistent with” model forecasts including the influence of global warming.

So in the event of above normal hurricane counts during the next couple of years, one thing we know a priori, is that such an occurrence is NOT consistent with anthropogenic climate change.

Make sure to remember this when reading all the stories that will certainly proclaim the contrary. If history is any guide to the future, it is likely that some such stories will emanate from the White House in its zeal to dredge up support for its Climate Action Plan and any carbon dioxide restrictions that it can squeeze out—despite the ineffectiveness of any such restrictions on altering the course of future climate, including Atlantic hurricanes.