Should We Blame Obama, Rangel, and Baucus if People Die to Escape the Death Tax?

The death tax is a punitive levy that discourages saving and investment and causes substantial economic inefficiency. But it's also an immoral tax that seizes assets from grieving families solely because someone dies. The good news is that this odious tax no longer exists. It disappeared on January 1, 2010, thanks to the 2001 tax cut legislation. The bad news is that the death tax comes back with a vengeance on January 1, 2011, ready to confiscate as much as 55 percent of the assets of unfortunate families.

I've criticized the death tax on many occasions, including one column in USA Today explaining the economic damage caused by this perverse form of double taxation, and I highlighted a few of the nations around the world that have eliminated this odious tax in another column for the same paper.

Politicians don't seem persuaded by these arguments, in part because they feel class warfare is a winning political formula. President Obama, House Ways & Means Committee Chairman Charlie Rangel, and Senate Finance Committee Chairman Max Baucus have been successful in thwarting efforts to permanently kill the death tax. But I wonder what they'll say if their obstinate approach results in death?

Congresswoman Cynthia Lummis of Wyoming is getting a bit of attention (including a link on the Drudge Report) for her recent comments that some people may choose to die in the next two months in order to protect family assets from the death tax. For successful entrepreneurs, investors, and small business owners who might already be old (especially if they have a serious illness), there is a perverse incentive to die quickly.

U.S. Rep. Cynthia Lummis says some of her Wyoming constituents are so worried about the reinstatement of federal estate taxes that they plan to discontinue dialysis and other life-extending medical treatments so they can die before Dec. 31. Lummis...said many ranchers and farmers in the state would rather pass along their businesses -- "their life's work" -- to their children and grandchildren than see the federal government take a large chunk. "If you have spent your whole life building a ranch, and you wanted to pass your estate on to your children, and you were 88 years old and on dialysis, and the only thing that was keeping you alive was that dialysis, you might make that same decision," Lummis told reporters.

The class-warfare crowd doubtlessly will dismiss these concerns, but they should set aside their ideology and do some research. Four years ago, two Australian scholars published an article on this issue in Topics in Economic Analysis & Policy, which is published by the Berkeley Electronic Press. Entitled "Did the Death of Australian Inheritance Taxes Affect Deaths?", their paper looked at the roles of tax, incentives, and death rates. The abstract has an excellent summary.

In 1979, Australia abolished federal inheritance taxes. Using daily deaths data, we show that approximately 50 deaths were shifted from the week before the abolition to the week after. This amounts to over half of those who would have been eligible to pay the tax. ...our results imply that over the very short run, the death rate may be highly elastic with respect to the inheritance tax rate.

And here's a graph from the article, which shows how many affected taxpayers managed to delay death until the tax went away. 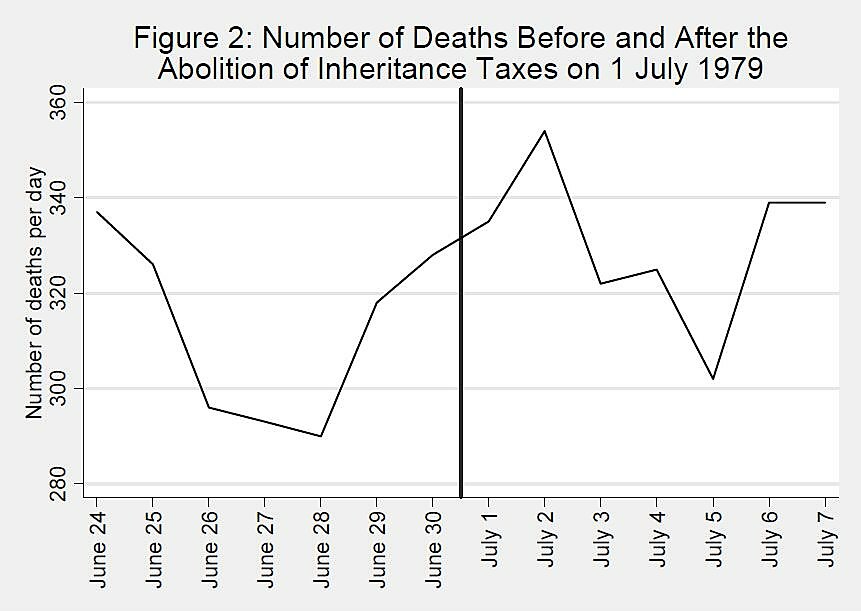 Obama and other class-warfare politicians now want to run this experiment in reverse. I already noted in another blog post that there are Americans who are acutely aware of the hugely beneficial tax implications if they die in 2010. In other words, Congresswoman Lummis almost certainly is right.

I don't actually think that Obama, Rangel, Baucus and the rest of the big-government crowd should be blamed for any premature deaths that occur. But I definitely think that they should be asked if they feel any sense of guilt, remorse, and/or indirect responsibility.