The Shape of Waste to Come

House Democrats have released a $825 billion plan to “stimulate” the nation’s economy. After reading through the 13‐​page press release, it is blatantly obvious to me that the proposal is nothing more than a conglomeration of traditional special interest favorites. Education pork? Check. Science pork? Check. Transportation pork? Check. Pork for state and local governments? Check and check.


Cato scholars have written extensively on most of the plan’s components at one time or another. For instance, anyone interested in the alleged stimulative power of more federal dollars being spent on higher education should check out Neal McCluskey’s post from Friday. Or see Chris Edwards and Peter Van Doren on infrastructure spending in this nifty piece.


In no particular order, I thought I’d pick out some of the programs targeted for “stimulating” and provide an example of how taxpayers can expect their money to be spent. Lest anyone think I’m cherry‐​picking, the following hardly scratches the surface:


A March 2008 HUD Inspector General audit found that of the $10.5 million in HOME funding Fulton County Georgia received since 2000, $6.4 million involved questionable usage. According to the Atlanta Journal Constitution, a nonprofit that was originally allocated $244,850 by the county for a home building project was given another $220,000 due to cost overruns. The nonprofit was supposed to repay the money when the homes were sold but went into default and the money was never recovered. Only one four‐​plex housing unit was near completion and it has since succumbed to vandals. There’s no word from HUD bureaucrats yet on whether the weeds growing up around the building count as “green technologies.”


An October HUD IG audit of a Chicago homeless assistance grantee, which has received $2.8 million since 2004, found that it “materially failed” to manage its grant money. According to the audit, $671,252 in unsupported expenses were uncovered including money spent on DVDs, video consoles and games, audio systems, digital camera, and party supplies. $2,840 was spent on maintenance for the executive director’s personal vehicle.


The Association of Community Organizations for Reform Now (ACORN) is a radical leftist outfit known for perpetrating vote fraud and advocating for detrimental government policies, of which it often benefits from financially. As of 2006, ACORN has received over $2.7 million in SHOP funds. As Sol Stern wrote in City Journal, “It [ACORN] promotes a 1960s‐​bred agenda of anti‐​capitalism, central planning, victimology, and government handouts to the poor. As a result, not only does it hard the poor it claims to serve; it is also a serious threat to the urban future.”


Community Development Block Grants: “$1 billion for community and economic development projects including housing and services for those hit hard by tough economic times.”


In 2006, the HUD IG looked at the CDBG program and found that fraud by local governments and private grantees was common and increasing. After reviewing only 35 of nearly 1,200 CDBG grant recipients since 2004, investigators tallied $100 million in improper or questionable spending. For example, a December audit of the City of San Diego’s use of CDBG money found that $1.8 million was spent on ineligible activities and another $11.1 million in spending could not be supported due to insufficient reporting. In one instance, thousands of dollars were spent on a festival to celebrate a shopping center. 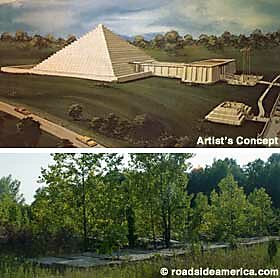 
This money will be administered by the Dept. of Commerce’s Economic Development Administration. The EDA has been a recognized source of wasteful spending since its creation in the 60s. It was a frequent target of former Sen. William Proxmire (known for his anti‐​pork “Golden Fleece Awards”) who once stated that the EDA “deserves to die.”


One EDA boondoggle highlighted by Proxmire is memorialized on the internet. The EDA funded grants to Bedford, Indiana to build limestone replicas of the Great Wall of China and the Egyptian pyramid of Cheops. An EDA official at the time said that the grants “gave promise of bringing some economic development to a very poor part of Indiana.” The project was never completed.