As David Boaz recently demonstrated, the jeremiads emanating from Washington over proposed cuts in military spending are unfounded. Howard P. “Buck” McKeon’s op-ed in today’s Washington Post is only the latest to decry the “damaging blow to our military” that will be done by “massive defense cuts.”

Not only is Pentagon spending not at its lowest level in 60 years, as the Heritage Foundation claimed, it will not fall to such a level even if the Budget Control Act’s sequestration spending caps are implemented. David shows that charts can obscure the relevant facts or contribute to poor arguments.

But charts can also help shed light on the truth. For example, in the first chart below, prepared by my colleague Charles Zakaib, one might conclude that the reductions being contemplated as an outgrowth of President Obama’s strategic review (the brown line) would represent a dramatic cut in the Pentagon’s base budget. The automatic sequester cuts (the red line at the bottom) appear even more draconian. 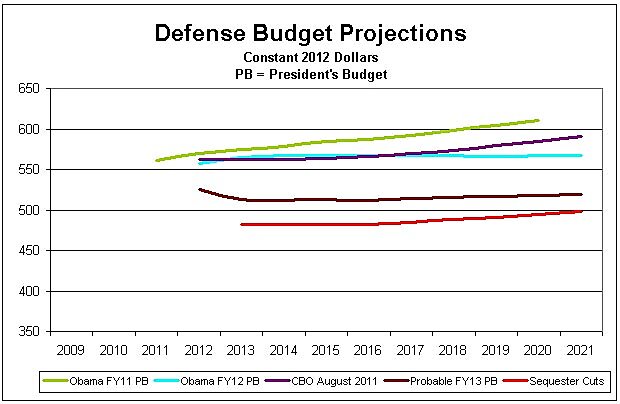 What is not shown, however, is the context in which such cuts would occur. In the next chart, those projections are compared to defense spending since 1989. As you can see, the sequestration cuts would return military spending to no less than the spendthrift days of 2007, as others have noted in the past. 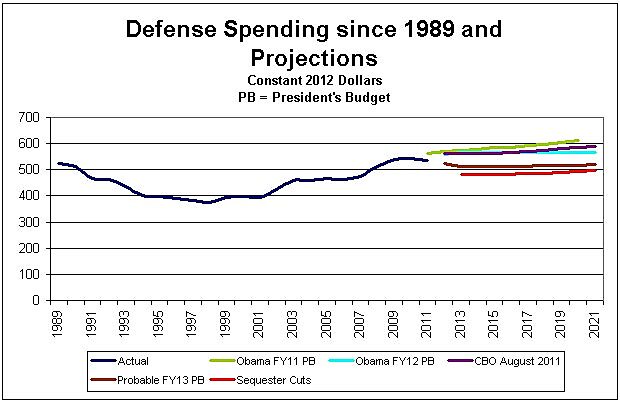 Should sequestration occur, defense spending will remain at historically high levels relative to the last post-war drawdown and not approach the low of 1998, much less a 60-year low.

* Thanks to Charles Zakaib with his assistance on this research and this post.