The Sequester May Not Be ‘Fair,’ but It’s Real and It Would Slow the Growth of Government

Much to the horror of various interest groups, it appears that there will be a “sequester” on March 1.


This means an automatic reduction in spending authority for selected programs (interest payments are exempt, as are most entitlement outlays).


Just about everybody in Washington is frantic about the sequester, which supposedly will mean “savage” and “draconian” budget cuts.


In reality, the sequester merely means a reduction in the growth of federal spending. Even if we have the sequester, the burden of government spending will still be about $2 trillion higher in 10 years.


The other common argument against the sequester is that it represents an unthinking “meat‐​ax” approach to the federal budget.


But a former congressional staffer and White House appointee says this is much better than doing nothing.


Here’s some of what Professor Jeff Bergner wrote for today’s Wall Street Journal:

You know the cliché: America’s fiscal condition might be grim, but lawmakers should avoid the “meat ax” of across‐​the‐​board spending cuts and instead use the “scalpel” of targeted reductions. …Targeted reductions would be welcome, but the current federal budget didn’t drop from the sky. Every program in the budget—from defense to food stamps, agriculture, Medicare and beyond—is in place for a reason: It has advocates in Congress and a constituency in the country. These advocates won’t sit idly by while their programs are targeted, whether by a scalpel or any other instrument. That is why targeted spending cuts have historically been both rare and small.

The most likely way to achieve significant reductions in spending is by across‐​the‐​board cuts. Each reduction of 1% in the $3.6 trillion federal budget would yield roughly $36 billion the first year and would reduce the budget baseline in future years. Even with modest reductions, this is real money. …let’s give up the politically pointless effort to pick and choose among programs, accept the political reality of current allocations, and reduce everything proportionately. No one program would be very much disadvantaged. In many cases, a 1% or 3% reduction would scarcely be noticed. Are we really to believe that a government that spent $2.7 trillion five years ago couldn’t survive a 3% cut that would bring spending to “only” $3.5 trillion today? Every household, company and nonprofit organization across America can do this, as can state and local governments. So could Washington.

And he turns the fairness argument back on critics, explaining that it is a virtue to treat all programs similarly:

Across‐​the‐​board federal cuts would have to include all programs—no last‐​minute reprieves for alternative‐​energy programs, filmmakers or any other cause. All parties would know that they are being treated equally. Defense programs, food‐​stamp recipients, retired federal employees, the judiciary, Social‐​Security recipients, veterans and members of Congress—each would join to make a minor sacrifice. It would be a narrative of civic virtue. 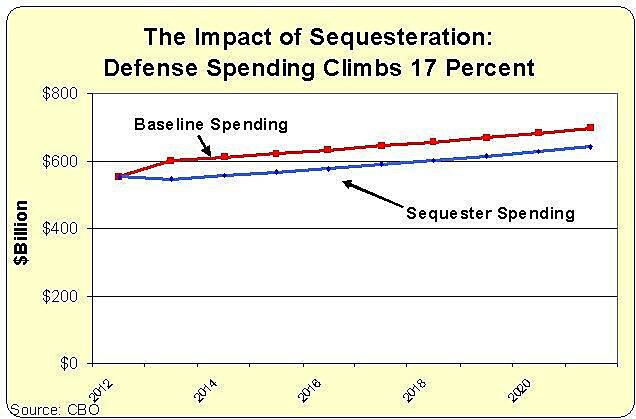 At the risk of oversimplifying, the sequester basically applies to so‐​called discretionary spending. So‐​called mandatory spending accounts for a majority of federal spending, but it is largely exempt, so entitlement reform will still be necessary if we want to address the nation’s long‐​run fiscal challenges.

Talk of axes versus scalpels is designed to deflect reform. Whatever carefully targeted budget cuts might animate our dreams, the actual world of divided government suggests only one realistic way to achieve real spending reductions. It is not a meat ax. A scalpel that shaves a bit off all programs equally would work just fine.

In other words, the sequester is simply a very modest step in the right direction.


And while we should be radically downsizing the federal government, it’s worth reiterating that modest steps are capable of yielding big results.


Simply restraining the budget so that it grows 2.5 percent annually, for instance, is all that would be needed to balance the budget in 10 years. Not big budget cuts. Not small budget cuts. Just a bit of measly fiscal restraint.


Yet President Obama thinks that’s asking too much and instead wants ever‐​higher taxes to support an ever‐​growing government.