Senator Corker’s CAP Act: A Better Version of Gramm‐​Rudman to Reduce the Burden of Government

This Thursday, April 7, Senator Corker of Tennessee will be the opening speaker at the Cato Institute’s conference on “The Economic Impact of Government Spending” (an event that is free and open to the public, so register here if you want to attend).


The Senator will be discussing his proposal to cap and then gradually reduce the burden of government spending, measured as a share of gross domestic product. With federal outlays currently consuming about 25 percent of economic output, excessive federal spending is America’s main fiscal problem.


Corker’s proposal would put federal spending on a 10‐​year glide path so that it eventually shrinks to 20.6 percent of GDP. This chart, from the Senator’s upcoming presentation, shows that government will grow at a much slower pace as a result of this restraint. Indeed, total savings over the 10‐​year period, measured against a baseline that assumes the federal government is left on auto‐​pilot, would exceed $5 trillion. 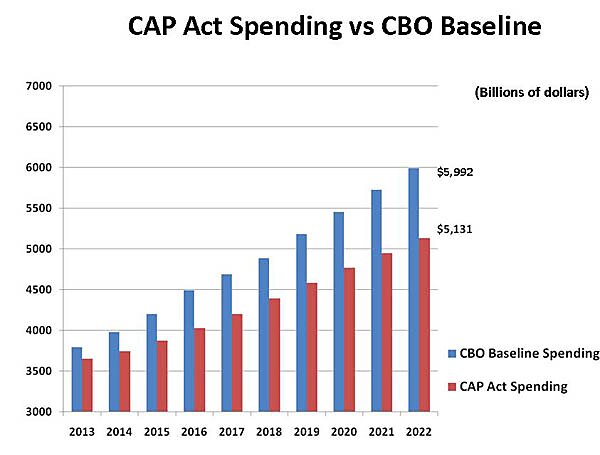 There are two things to admire about Senator Corker’s CAP plan.


First, he correctly understands that the problem is the size of government. As explained in this video, spending is the problem and deficits are a symptom of that problem.


Unfortunately, many policy makers focus on the budget deficit, which often makes them susceptible to misguided policies such as higher taxes. At best, such an approach merely substitutes one bad way of financing federal spending with another bad way of financing federal spending. And it’s much more likely that higher taxes will simply lead to more spending, thus exacerbating the real problem.


Second, Corker’s legislation has a real enforcement mechanism. If Congress fails to produce a budget that meets the annual spending cap, there is a “sequester” provision that automatically takes a slice out of almost every federal program.


Modeled after a similar provision in the successful Gramm‐​Rudman‐​Hollings law of the 1980s, this sequester puts real teeth in the CAP Act and ensures that the burden of government spending actually would be reduced.