Sen. Tim Kaine at Cato: A Year (and Counting) of Unauthorized War

This week marks the first anniversary of our latest war in the Middle East, but after some 5,000 airstrikes in two countries, and with 3,500 U.S. troops on the ground, we’ve yet to have an up-or-down vote in Congress on authorization for the use of military force against ISIS.

We’re recognizing—“celebrating” isn’t the right word—that unhappy anniversary at Cato with a talk by Senator Tim Kaine (D-VA), who holds the unfashionable view that Congress ought to vote on the wars we fight, and has been waging a (sometimes lonely) battle to get his colleagues to live up to their most important constitutional responsibility. The event runs from 9:00-10:00 AM on Thursday, August 6, so you can hear about the erosion of congressional war powers and grab your morning coffee without getting to work too late; RSVP here.

President Obama announced the first wave of airstrikes in Iraq on August 7, 2014, and expanded the campaign against ISIS to Syrian territory in September. But it took him six months to send Congress a draft Authorization for the Use of Military Force—along with a message insisting that “existing statutes provide me with the authority I need” to wage war anyway.  Since then, as Senator Kaine recently noted, “Congress has said virtually nothing.” Recent headlines make that all too clear: “Congress avoids war debate as ISIL advances” (Politico, 5/28); “Islamic State War Authorization Goes Nowhere, Again” (Bloomberg, 6/9); “House kills measure to force debate on military force against ISIS” (The Hill, 6/11)…and so on. 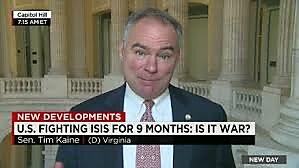 The president’s claim that he already has all the authority he needs to wage war with ISIS is, as Senator Kaine put it in an earlier speech, “ridiculous.” Its principal basis is the AUMF Congress passed three days after the 9/11 attacks and was intended to be used against those who "planned, authorized, committed or aided” the September 11 attacks or “harbored” those who did. Its main targets were, obviously, Al Qaeda and the Taliban, yet now, nearly 14 years later, the administration insists it serves as legal justification for a war of at least three years, in at least two countries, against a group that is not only not a “cobelligerent” with Al Qaeda, but is engaged in open warfare against the group. Building on the Bush administration’s expansive interpretation of the 2001 authorization, the Obama administration has turned the 9/11 AUMF into an enabling statute for an open-ended globe-spanning war. “This is unacceptable,” Senator Kaine argues, “and we should be having a debate to significantly narrow that authorization” as well.

The decision to go to war is among the gravest choices a constitutional democracy can make. The Framers erected firebreaks to hasty action, designed to force deliberation and consensus before the resort to deadly force. As James Wilson put it to the Pennsylvania ratifying convention, “this system will not hurry us into war; it is calculated to guard against it. It will not be in the power of a single man, or a single body of men, to involve us in such distress; for the important power in declaring war is vested in the legislature at large.’’ Join us Thursday as we explore how Congress can take that power back.