This week saw more bad news for ObamaCare.  So the Obama administration slipped on the brass knuckles.

Last week brought news that health insurance premiums grew by a smaller increment in 2010 than in any of the past 10 years.  On Tuesday, The Wall Street Journal reported that ObamaCare appears to be turning that around:

Health insurers say they plan to raise premiums for some Americans as a direct result of the health overhaul in coming weeks, complicating Democrats' efforts to trumpet their signature achievement before the midterm elections. Aetna Inc., some BlueCross BlueShield plans and other smaller carriers have asked for premium increases of between 1% and 9% to pay for extra benefits required under the law, according to filings with state regulators.

The Journal even included this handy chart, where the blue bars show how much ObamaCare will add to the cost of certain health plans in 2011.

In addition, a Mercer survey of employers found that 79 percent expect they will lose their "grandfathered" status by 2014, and therefore will become subject to many more of ObamaCare's new mandates---a much higher figure than the administration had estimated.  Employers expect those additional mandates will increase premiums by 2.3 percent, on average, and boost the overall growth of premiums from 3.6 percent to 5.9 percent in 2011.

U.S. Department of Health and Human Services Secretary Kathleen Sebelius wrote America’s Health Insurance Plans (AHIP), the national association of health insurers, calling on their members to stop using scare tactics and misinformation to falsely blame premium increases for 2011 on the patient protections in the Affordable Care Act.  Sebelius noted that the consumer protections and out-of-pocket savings provided for in the Affordable Care Act should result in a minimal impact on premiums for most Americans.  Further, she reminded health plans that states have new resources under the Affordable Care Act to crack down on unjustified premium increases.

In the letter, Sebelius cites HHS's internal analyses and those of Mercer and other groups to support her claim that ObamaCare's impact on premiums "will be minimal" --- somewhere in the range of 1 percent to 2.3 percent, on average.  Sebelius tells insurers that she will show "zero tolerance" for insurers who "falsely" blame premium increases on ObamaCare, and promises aggressive action against those who do: 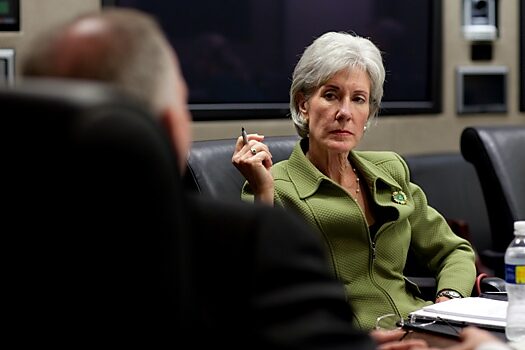 [We] will require state or federal review of all potentially unreasonable rate increases filed by health insurers... We will also keep track of insurers with a record of unjustified rate increases: those plans may be excluded from health insurance Exchanges in 2014.  Simply stated, we will not stand idly by as insurers blame their premium hikes and increased profits on the requirement that they provide consumers with basic protections.

First of all, how does Sebelius know these claims are false?  The analyses she cites project a 1-2 percent average increase in premiums. As I blogged back in June, her own agency estimated that just a couple of ObamaCare's mandates will increase premiums for some health plans by 7 percent or more.  Is 9 percent really that far off?  Didn't her own agency write that a “paucity of data” means there is “tremendous,” “substantial,” and “considerable” uncertainty about the reliability of their own estimates?

More important: so what if insurers believe that ObamaCare is increasing premiums by 9 percent, while Sebelius believes it only increased premiums 7 percent?  What business does she have threatening insurers because they disagree with her in public?  ObamaCare gave the HHS secretary considerable new powers.  Is one of those the power to regulate what insurers say about ObamaCare?  Excluding insurers from ObamaCare's exchanges is not a minor threat.  Medicare's chief actuary predicts that in the future, "essentially all" Americans will get their health insurance through those exchanges.  Does anyone seriously doubt that Sebelius' threat is about protecting politicians rather than consumers?

When President Obama promised that he would sell ObamaCare to the American people, most people probably assumed he meant with his rhetorical skills.  But National Journal reports, "Remember how the administration was going 'to sell' the controversial legislation once it passed? Obama is not doing much pitching."  He can't even sell Jon Stewart on ObamaCare.  The administration seems to have settled on a different sales strategy: intimidate those who say unflattering things about ObamaCare.

Earlier this year, I predicted that ObamaCare would get uglier and more corrupt over time.  I didn't know I'd be proven right so quickly.