In Search of a Syria Strategy: Event (April 30th)

On April 30th, Cato will host an event exploring the future of the Syrian conflict, with particular emphasis on the role of the United States. Fighting in Syria recently entered its fifth year, and there is no clear end in sight. The conflict has resulted in an estimated 191,000 deaths and has produced more than 9.5 million refugees.

The civil war is chaotic. There are hundreds (if not thousands) of rebel groups currently operating in Syria, many of whom have devoted more time to fighting each other than the regime. Foreign funding and weapons flow freely to all sides. The rise of ISIS and its spread to Iraq, along with the increasing prominence of other extremist groups like al Nusra has further complicated the situation. This map, recently released by the Department of Defense, illustrates some of the complexity: 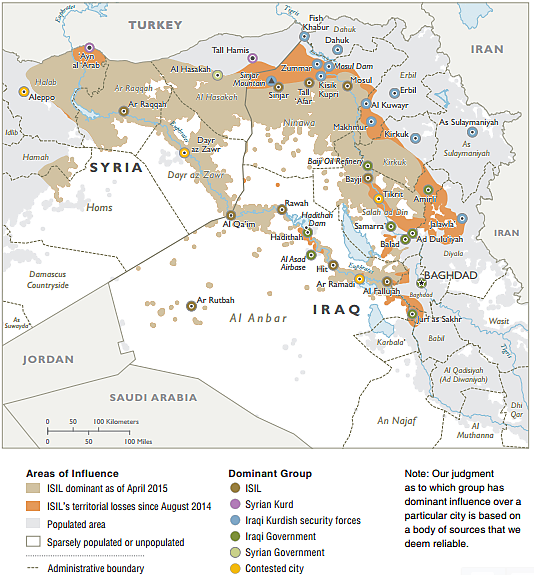 American involvement in Syria was minimal prior to September 2014, when the Obama administration initiated airstrikes to ‘degrade and destroy’ ISIS in Iraq and Syria. This campaign is ongoing, and the United States is also funding and training Syrian rebels to fight against ISIS.

Unfortunately, these actions are not matched with strategic goals. Though airstrikes have been somewhat successful in killing ISIS fighters, the group receives a consistent flow of new recruits.  Moreover, airstrikes will not yield a viable political solution, and are ultimately useless without some form of ground support. President Obama has rightly stated that there should be no American troops deployed to Syria, but other options are also challenging.

Rebel groups in Syria remain fragmented, and extremist groups are now dominant. The U.S. training program for moderate rebels has been unsuccessful in recruiting its hoped-for numbers. And while U.S. leaders have backed away from their opposition to the Assad regime, which is now a viable ally in the fight against ISIS, the focus of most rebel groups, and of some U.S. allies, is still on fighting the regime.

Diplomatic attempts to end the crisis are also on life support. The Geneva process peace talks collapsed over a year ago, and no firm plans for new peace talks have emerged since. The difficulty of achieving a consensus between rebel groups, regional actors, and western states, each of which has different goals in Syria, cannot be overstated.

Next Thursday’s event focuses on these issues. Our panelists will discuss what the United States is trying to achieve in Syria, and how such goals might be achieved. In addition to myself, the event features Erica Borghard, Assistant Professor at the U.S. Military Academy (West Point), whose research focuses on the dynamics of proxy warfare in Syria and elsewhere; and Nicholas Heras, Research Associate at the Center for a New American Security, and author of the recent report “How This Ends: A Blueprint for De-Escalation in Syria.” The event begins at noon on April 30th; you can register for it here.