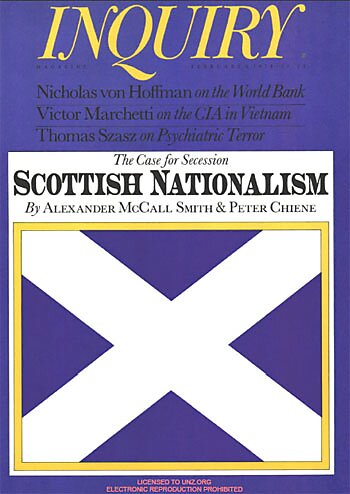 Alex Salmond, Scotland’s first minister, writes in the Washington Post that his country “once was independent and aspires to that status again.” I regret that a major part of his argument with the Post’s editorial board is whether Scotland would remain involved in global military intervention. You’d think the opportunity to extricate your country from quagmires like Iraq would be a great benefit to the Scots. But Salmond denies that an independent Scotland would mind its own business and live in peace.


Still, independence for any country ought to appeal to Americans, especially to those of us with Scottish roots. Some scholars argue that the Act of Union in 1707 made the Scots part of a larger and more advanced nation and opened the way to the Scottish Enlightenment of David Hume, Adam Smith, and other scholars. And perhaps those modern ideas and the connection with England made possible the achievements of the inventor James Watt, the architect Robert Adam, the road builder John MacAdam, the bridge builder Thomas Telford and later Scots such as Alexander Graham Bell and Andrew Carnegie.


But whatever the benefits of union might have been in 1707, surely they have been realized by now. And alas, the land of Adam Smith has become one of the poorest and most socialist parts of Great Britain. So maybe a libertarian shouldn’t look forward to Scottish independence. On the contrary, I think it’s easy for Scotland to whine and demand more money from the British central government. An independent Scotland would have to create its own prosperity, and surely the people who produced the Enlightenment are smart enough to discover the failures of socialism pretty quickly if they become free, independent, and responsible for their own future.


The Cato Institute’s late, lamented magazine Inquiry got to the topic of Scottish independence long before the voters did, in 1978. Its article was written by Alexander McCall Smith, a distinguished professor of law at the University of Edinburgh but now much better known as the author of the The No. 1 Ladies’ Detective Agency Series, and independence activist Peter Chiene. They haven’t achieved their goal yet, but the landslide victory in 2011 for the Scottish National Party has made national independence a real possibility.