According to Kate Toran, the San Francisco transport authority's Taxis and Accessible Services interim director, companies such as Uber and Lyft, which provide ridesharing services, "have dramatically changed the for-hire transportation industry in San Francisco." 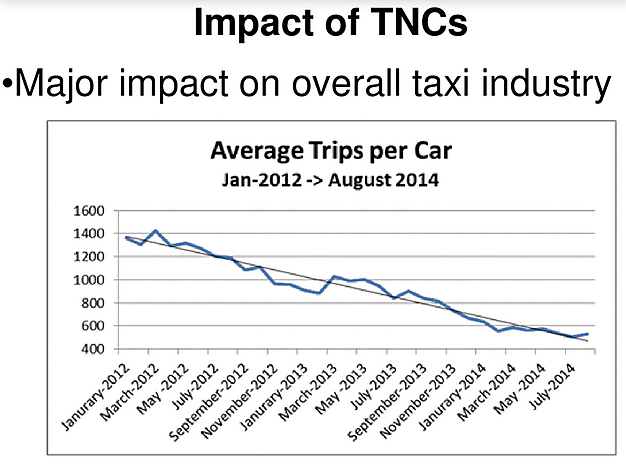 Uber and Lyft are both headquartered in San Francisco and are classified as Transportation Network Companies (TNCs), a designation created by California's Public Utilities Commission last year.

Uber CEO Travis Kalanick has not hidden his feelings regarding the taxi industry. Earlier this year he said that Uber was in a political campaign against "an ass*** named Taxi."

Of course, the slide does not show the whole picture. Correlation is not causation, and without data on ridesharing companies' rides in San Francisco over the same time period, it is impossible to conclude for sure that the ridesharing services provided by companies such as Uber and Lyft are significantly contributing to the taxi decline in San Francisco.

It is notable that the SFMTA has decided to waive some fees—including the driver application fee—for taxis in 2014-2015 in an attempt to attract new drivers and keep current drivers from quitting. Among the many advantages of companies such as Lyft is the low cost of entry for drivers.

According to the San Francisco Examiner, the SFMTA is also contemplating reducing the medallion fee:

Other possible regulatory actions the transit agency has contemplated to make cab driving more financially attractive to drivers include reducing fees for medallions, which allow holders to operate taxis. Other ideas include reducing the fee to transfer medallions by 20 percent, eliminating the $500 ramp taxi medallion use fee, lowering the medallion renewal for transferrable medallion holders and allowing taxi wrap advertising.

During her presentation, Toran also highlighted the need for the SFMTA to review regulation. From the San Francisco Examiner:

"It's time for [the] MTA as a regulator to really review the regulations and make sure our regulations have been thoroughly reviewed and that they still make sense," Toran said. "Our bottom line is public safety, but to the extent that the regulations can be more flexible and more responsive and we have a process to update."

The presentation mentions taxi apps Curb and Flywheel. It remains to be seen if an increasing number of San Francisco taxis using these apps will halt the dramatic decline in taxi trips, but it is encouraging to see that Toran supports competing with ridesharing apps and reviewing San Francisco's taxi regulations.