The Rush to Expand the VA

The Senate voted 93-3 on Wednesday to expand health care spending for veterans. Under the Senate bill, veterans would be able to access health care services from facilities outside the Department of Veterans Affairs (VA) system.

The headlines from the last few weeks clearly illustrate the need to reform this massive system, but the Senate’s rushed plan would dramatically increase veterans' health care spending without tackling needed fundamental reforms.

Just before the vote, the Congressional Budget Office (CBO) released a preliminary estimate of the bill’s costs. Because of the hurried nature of introduction and debate, CBO was not able to fully review and estimate costs.

CBO says that the new program would increase spending by $35 billion over 10 years. But that doesn’t tell the full story. CBO expects initial set-up of the new program would take several years with veteran enrollment ramping up over time. And the bill just authorizes the new spending until 2016. So it appears that the CBO estimate of $35 billion just includes the cost over the first three years.

Over the longer term, CBO estimates that added annual spending would be $50 billion a year. So if the current bill is enacted and the added spending extended in the future, it would raise federal spending by about $385 billion over the next decade, as illustrated in the chart below the jump. 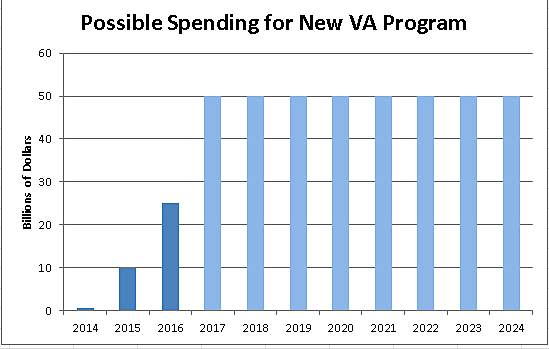 The $385 billion figure is likely conservative because it assumes that costs stay flat over time. But as more veterans enroll and health care costs increase, the figures could grow larger. CBO says that its estimates are “highly uncertain,” which is one reason why the Senate’s rush to push the bill through was so irresponsible.

The VA is already the fifth largest federal agency. If the new spending is made permanent, VA’s total budget would grow by about one-third and VA health care spending would roughly double.

During debate on Wednesday, several senators raised concern over the dramatic increase in VA spending without any offsetting cuts, but 75 senators swiftly brushed it aside. Allowing any debate about large expansions of government is apparently out of style in the Senate. But what’s needed in the VA is fundamental restructuring, not an ill-planned gusher of new spending.

Political crises are always the most dangerous time for the growth of government. The VA crisis is proving to be no different.