The GAO notes that “work participation rates … do not appear to be achieving the intended purpose of encouraging states to engage specified proportions of TANF adults in work activities.”


States are required to have at least 50 percent of eligible TANF recipients from single parent families participating in work activities. However, states are given various credits and exemptions that significantly reduce the number of recipients required to work. As a result, only about 30 percent of TANF recipients engage in “work activities,” which is often liberally defined. (This has been the case before and during the recession.)


Moreover, while TANF has successfully reduced the budgetary cost of cash‐​welfare, overall federal spending on anti‐​poverty programs has increased dramatically. According to a chart from Brian Riedl, anti‐​poverty spending has increased an inflation‐​adjusted 89 percent over the present decade: 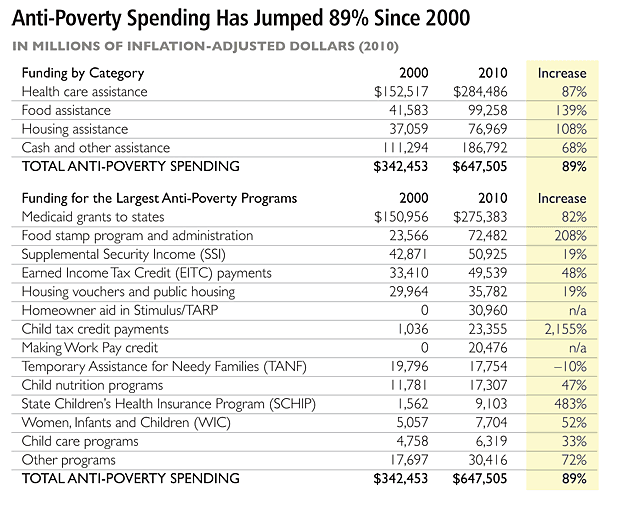 I previously discussed how TANF enrollment has dropped since its passage in 1996 while food stamp enrollment has greatly increased. A food stamp user interviewed by the New York Times indicates one reason for the trend:

‘It used to be easier to go on cash assistance,’ she said as she left a food stamp office in Brooklyn this month. ‘You didn’t have to go to work, you didn’t have to report every day to an office and sign in and sign out. Now, if you don’t go to those group job meetings in the mornings, they shut down your whole welfare case. So that’s why I just get food stamps.’

Not surprisingly, the cost of the food stamps program has gone through the roof: 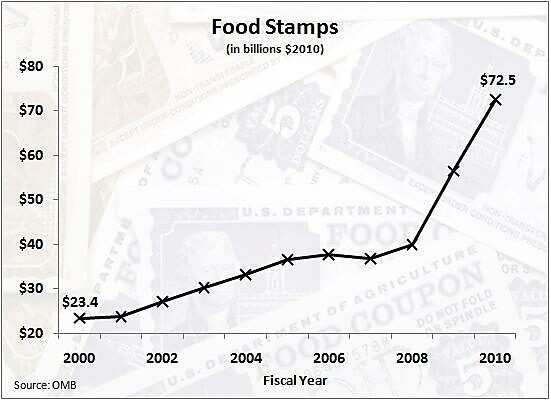 The desirability of federal anti‐​poverty programs in the midst of difficult economic times is a sensitive topic. However, with so many Americans currently in need of assistance, now is actually a good time to discuss the role of government in taking care of the less fortunate. As a Cato essay on welfare and Temporary Assistance for Needy Families argues, the federal government isn’t the best option.