I'm in Sweden today, where I just spoke before Timbro (a prominent classical liberal think tank) about the US elections and the implications for public policy.

My main message was pessimism since neither Donald Trump nor Hillary Clinton support genuine entitlement reform.

But I've addressed that topic many times before. Today, motivated by my trip, I want to augment my analysis about Sweden from 10 days ago.

In that column, I highlighted some research from Professor Olle Kranz showing that Sweden became a rich nation during a free-market era when government was relatively small. And as you can see from his chart (I added the parts in red), this is also when per-capita economic output in Sweden caught up with - and eventually surpassed - per-capita GDP in other advanced countries.

Then Sweden began to lose ground. Some of this was understandable and inevitable. Sweden didn't participate in World War II, so its comparative prosperity during the war and immediately afterwards was a one-time blip.

But the main focus of my column from last week was to show that Swedish prosperity began a sustained drop during the 1960s, and I argued that the nation lost ground precisely because statist policies were adopted.

Today, let's build upon Professor Kranz's analysis by extending his calculations. He did his research in the early part of last decade, and we now have many years of additional data that can be added to the chart.

But before doing that, it's worth noting that the years of additional data basically coincide with a period of market-oriented reforms in Sweden. A study from the Reform Institute in Stockholm explains some of what happened, starting with the stagnation caused by the era of big government.

The seventies and eighties saw Sweden’s tax burden rise from an average European level to the world’s highest. The public sector expanded vastly. All facets of the welfare system were made more generous in international comparison. Meanwhile, labour market regulation increased... Throughout these years, Swedes’ individual after-tax real income stagnated, private sector job creation ceased, and public debt spiralled higher. This culminated in a severe economic crisis in the early 1990s. By then, Sweden had fallen to 14th place in the GDP per capita rankings of OECD countries.

The good news is that this economic misery led to market-oriented reforms.

When the onset of the financial crisis coincided with election of a market-oriented centre-right government in 1991, the reform process began in earnest. Most emphasis at the time was placed on reforms that opened significant sectors in the economy to greater competition. Moreover, an important feature of these regulatory reforms was that the crisis spurred local authorities to implement less burdensome regulation. ...significant changes were introduced to the tax system, macroeconomic policy framework, and social insurance system. ...every aspect of the Swedish economy has changed due to implementation of reforms. ...public sector employment has declined.

To be sure, none of the means Sweden became Hong Kong. It is currently ranked only #38 by Economic Freedom of the World, and its score only improved from 6.92 in 1990 to 7.46 today, hardly a huge jump.

But we nonetheless can now check whether this period of modest reform yielded any dividends. And, looking at an updated and extended version of Professor Kranz's chart, there certainly seems to be a clear relationship between pro-market policy and Swedish prosperity. 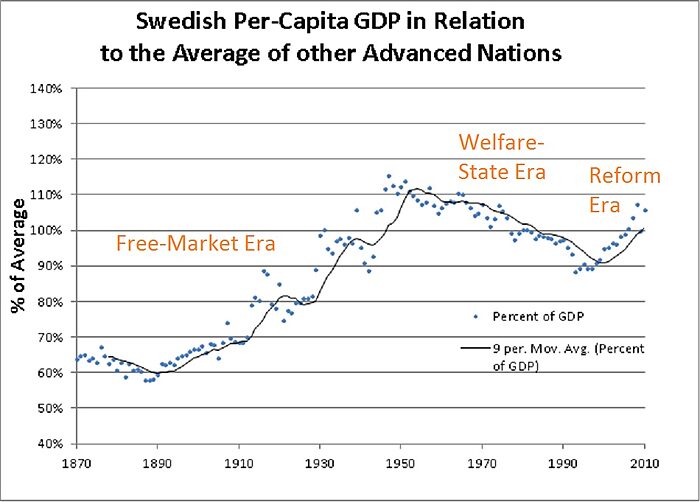 Call me crazy, but it seems like there's a lesson here about the right recipe for growth.

P.P.S. If you're interested in more information about market-oriented reforms in Sweden, check out Lotta Moberg's video and Johan Norberg's video.