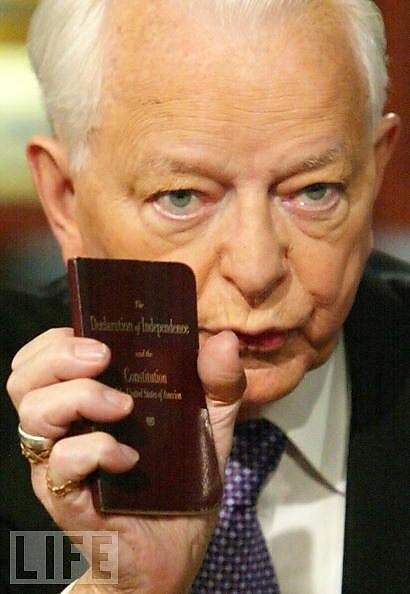 On the occasion of the death of Sen. Robert C. Byrd, libertarians will rightly think about the senator's flamboyant defense of federal largesse rained down on West Virginia and the garish and unseemly tendency to name things purchased with this largesse after the senator.  No doubt his membership in the Ku Klux Klan will be a centerpiece of the remembrance as well.

What hopefully will not go unremembered are a few additional facts.  As Adam Clymer's obituary observes, Byrd was a jealous defender of the rights of Congress against imperial presidentialism, likely the last of a breed.  You probably could count on one hand the younger senators or congressmen who take as seriously as did Byrd their duty as members of the American legislature.  Byrd frequently was seen wagging his copy of the Cato Institute reprint of the Declaration of Independence and U.S. Constitution in the face of his fellow legislators.  (If I recall correctly, my colleague Roger Pilon, who wrote the introduction to the reprint, wondered aloud whether Byrd had read it, given his view that the Treasury could rightly be used as West Virginia's piggybank.)

Byrd was also a man who turned dripping contempt into a high art form.  You could see this in any number of his speeches, but in particular this attribute was on display during the Iraq War debate.  Byrd, to his great credit, seemed to smell a rat from the outset, and he repeatedly and unsuccessfully spoke out against both the war and the executive deference that surrounded the debate.  (Those supporters of the Iraq War who condemn Byrd's porcine tendencies should ask themselves how many West Virginia bridges could have been purchased with the hundreds of billions and thousands of American lives we have poured into that disgraceful enterprise.  And at least we could drive across them.)

The man had a sense of history, as well.  Byrd's anti-presidentialism, opposition to Iraq, and historical grounding were all on display in this characteristic clip from the Iraq War debate in 2002, in which Byrd had some thoughts on appeals to legislators' duty to the "Commander in Chief."

I will not miss the Senator's penchant for pork, but I will certainly miss his lifelong defense of the prerogatives of the legislature.  Rest in peace.