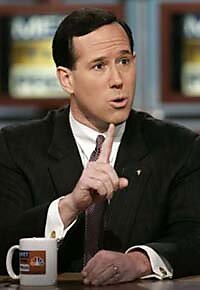 from Washington Post columnist Kathleen Parker: despite losing his reelection bid in 2006, former senator Rick Santorum is still thinking about running for president. He tells Parker that he represents the Ronald Reagan issue trinity: the economy, national security and social conservatism. And he's the limited-government guy:

When you have strong families and respect for life, he says, "the requirements of government are less. You can have lower taxes and limited government."

But Santorum is no Reaganite when it comes to freedom and limited government. He told NPR in 2005:

One of the criticisms I make is to what I refer to as more of a libertarianish right. You know, the left has gone so far left and the right in some respects has gone so far right that they touch each other. They come around in the circle. This whole idea of personal autonomy, well I don’t think most conservatives hold that point of view. Some do. They have this idea that people should be left alone, be able to do whatever they want to do, government should keep our taxes down and keep our regulations low, that we shouldn’t get involved in the bedroom, we shouldn’t get involved in cultural issues. You know, people should do whatever they want. Well, that is not how traditional conservatives view the world and I think most conservatives understand that individuals can’t go it alone. That there is no such society that I am aware of, where we’ve had radical individualism and that it succeeds as a culture.

He declared himself against individualism, against libertarianism, against “this whole idea of personal autonomy, . . . this idea that people should be left alone.” Andrew Sullivan directed our attention to a television interview in which the senator from the home state of Benjamin Franklin and James Wilson denounced America’s Founding idea of “the pursuit of happiness.” If you watch the video, you can hear these classic hits: “This is the mantra of the left: I have a right to do what I want to do” and “We have a whole culture that is focused on immediate gratification and the pursuit of happiness . . . and it is harming America.”

Parker says that Santorum is "sometimes referred to as the conscience of Senate Republicans." Really? By whom? Surely not by Reaganites, or by people who believe in limited government.