The restaurant industry has been hit hard by the health crisis and recession. Governments have showered billions of dollars on businesses to help them through the tough times. But the real solution in many cases is for governments to just get out of the way. For restaurants, that often means letting them put tables outside while the warm weather lasts.

A local news source profiled a restaurant near where I live. After the county government blocked two of the owner’s proposals for outside tables, the restaurant is losing thousands of dollars a month and may go under after decades serving the community.

After nearly 40 years, Joe Javidara said the future of his soccer‐​themed bar Summers Restaurant in Courthouse hinges on a permit he said is being processed through Arlington County government.

The restaurant announced on Monday that it was temporarily closed until it could get a permit for outdoor seating.

Like many local restaurant owners with insufficient indoor seating to allow for social distancing, Javidara said getting one of the county’s temporary outdoor seating requests is crucial to ensuring that customers feel safe returning to local eateries.

… It’s a process the county has worked to make easier over the last few months, but Javidara faces a critical snag: his sidewalk is too narrow. An earlier application in June was denied because staff found that putting the restaurant space on the sidewalk would not allow enough space for pedestrians to safely maneuver.

… Javidara’s solution had been to utilize the on‐​street parking area, removing four parking spaces to make way for tables with a cleared space on the sidewalk between the seating and the restaurant for pedestrians to pass through. It’s a move that’s been implemented in places like Clarendon and Shirlington, and in other jurisdictions like Alexandria, to the benefit of local restaurants.

He tried that approach in June, arguing that no one was coming to work in the nearby buildings anyway, but was rejected.

“We tried to open anyway, but we’re losing a lot of money and paying $20,000 in rent,” Javidara said. “And there’s no sports, so it feels like everything is against us.” 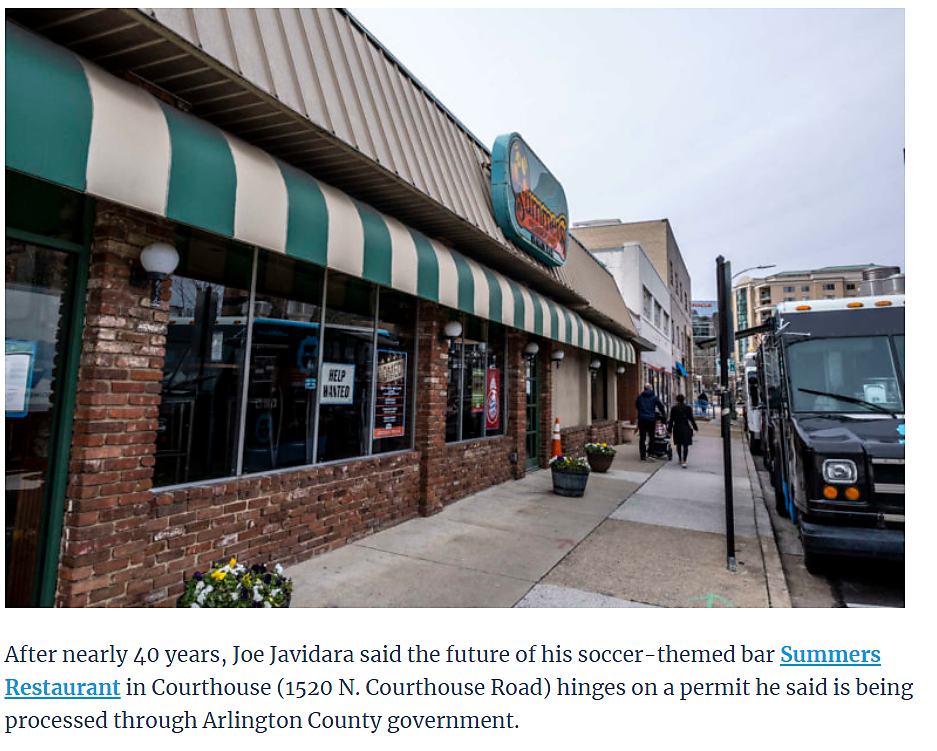