As Peter noted, M.A. "Morry" Adelman—a great economist, mentor, and friend—passed away last month at the age of 96. The first paragraph of The New York Times obituary (June 8, 2014) had this to say of Professor Adelman’s passing.

Morris A. Adelman, an energy economist who marshaled free-market principles and hard data in arguing that the world’s oil supply was not running out, died May 8 at his home in Newton, Mass. He was 96. The Massachusetts Institute of Technology, where he taught and researched for 65 years, announced the death on May 15.

I first had the pleasure of meeting Morry in June of 1967, shortly after I had joined the faculty at the Colorado School of Mines. The Rocky Mountain Petroleum Economics Institute had convened a meeting at Mines; Morry was one of the speakers on a star-studded program. I had been invited to edit a book, Essays in Petroleum Economics, of the conference papers.

As a rookie facing what was, at the time, an array of the most notable petroleum economists in the world (Adelman, Richard Gonzalez, Minor Jameson, John Lichtblau, Milton Lipton, Wallace Lovejoy, Stephen McDonald, James McKie, and Frank Young), I was, to put it mildly, anxious. But, thanks to the likes of Adelman, that problem was quickly put to rest.

Morry knew how to mentor young rookies. He also knew more about the oil industry--even the institutional details--than most of the conference representatives from the industry. He was not only a master of applied economics and detailed, sharp pencil work, but was an economist with a personality--a very sharp wit, very sharp indeed. This wit and his personality come through loud and clear in his writings. So, Morry remains with us, fortunately.

As I reread “Trends in Cost of Finding and Developing Oil and Gas in the U.S.”, which was Adelman’s chapter in Essays in Petroleum Economics, I am struck by just how careful he was to protect his text--a master of rhetoric, too. He paid the most careful and anxious attention to stressing that he was not making predictions, but only presenting short-term projections. As for intermediate projections, beyond 1980, Adelman thought (in 1967) they “only were of minor interest.” And “projections past the year 2000 are funny because it is better to laugh than to weep in the vain presumption of thinking we can see that far ahead.”

That said, Adelman’s chapter does suggest that he had what turned out to be very clear ideas about the possible long-run scenarios:

Nobody can tell what will happen either to energy demand or supply. All we need mention are a decisive breakthrough on: shale oil extraction, or direct finding of conventional crude oil, or coal conversion to liquids, or nuclear power, particularly the fast breeder reactor, or the fuel cell and other methods of energy conversion, not to mention the electric automobile. A major change in any one of these would put altogether new perspectives on developments in oil supply and cost.

Ever since my first encounter with Morry, I benefited from his generous mentoring and his many writings on petroleum economics. This really came home to roost in 1985, when, while retaining my post as a professor of applied economics at The Johns Hopkins University, I became the chief economist at the Friedberg Mercantile Group in Toronto. By late 1985, we were very short crude, as well as the Saudi riyal and the Kuwaiti dinar. We predicted that OPEC was about ready to collapse and that the price of crude would fall to below $10 per barrel. We ended up being right in a big way, when oil collapsed to below $10 per barrel in April of 1986 and both the Saudi riyal and the Kuwaiti dinar devalued shortly thereafter. My writings supporting those trades: “The Unravelling of OPEC: Crude Calculations” (Nov. 17, 1985) and “A Crude Roller Coaster” (Dec. 15, 1985) appeared in Friedberg’s Commodity and Currency Comments, a monthly publication. My analyses rested firmly on Adelman’s pioneering works.

A few years later, I wrote another Friedberg’s piece that was pure Adelman. It illustrates how property rights can be worked into the analysis of extractive industries like oil and gas (“Crude Oil: Take the Money and Run”, Friedberg’s Commodity and Currency Comments, Feb. 15, 1987). This, in part, is what I wrote:

Governmental spokesmen and financial analysts have been oversupplying us with atmospherics about the new OPEC agreement. To redress this imbalance, we offer some crude analytics.

With this simple model for the economics of depletable resources, we demonstrate that for Saudi Arabia--which has 35% of OPEC's capacity and holds the key to any viable cartel arrangement--oil in the ground is not worth more than money in the bank. In fact, for the Saudis to maximize the value of their oil resources, they should dramatically increase the rate at which they liquidate their oil reserves.

To understand the economics that might force the Saudis to increase their production, we must understand any forces that might tend to raise the Saudis' (and other producers') discount rates. To determine the present value of a barrel of reserves (V in our production equation), we must forecast the price that would be received from liquidating a barrel of reserves at some future date and then discount this price to present value. In consequence, when the discount rate is raised, the value of reserves (V) falls, the gross value of current production (P – V) rises, and increased rates of current production are justified.

When it comes to the political instability in the Middle East, the popular view is that increased tensions in the region will reduce oil production. Economic analysis suggests that the tensions will actually work to increase oil production.

Let’s suppose that the real risk-adjusted rate of discount, without any prospect of property expropriation, is 20% for the Saudis. Now, consider what happens to the discount rate if there is a 50-50 chance that a belligerent will overthrow the House of Saud within the next 10 years. In this case, in any given year, there would be a 6.7% chance of an overthrow. This risk to the Saudis would cause them to compute a real risk-adjusted rate of discount, with the prospect of having their oil reserves expropriated. In this example, the relevant discount rate would increase to 28.6% from 20% (See the accompanying table for alternative scenarios). This increase in the discount rate will cause the present value of reserves to decrease dramatically. For example, the present value of $1 in 10 years at 20% is $0.16, while it is worth only $0.08 at 28.6%. The reduction in the present value of reserves will make increased current production more attractive because the gross value of current production (P – V) will be higher. 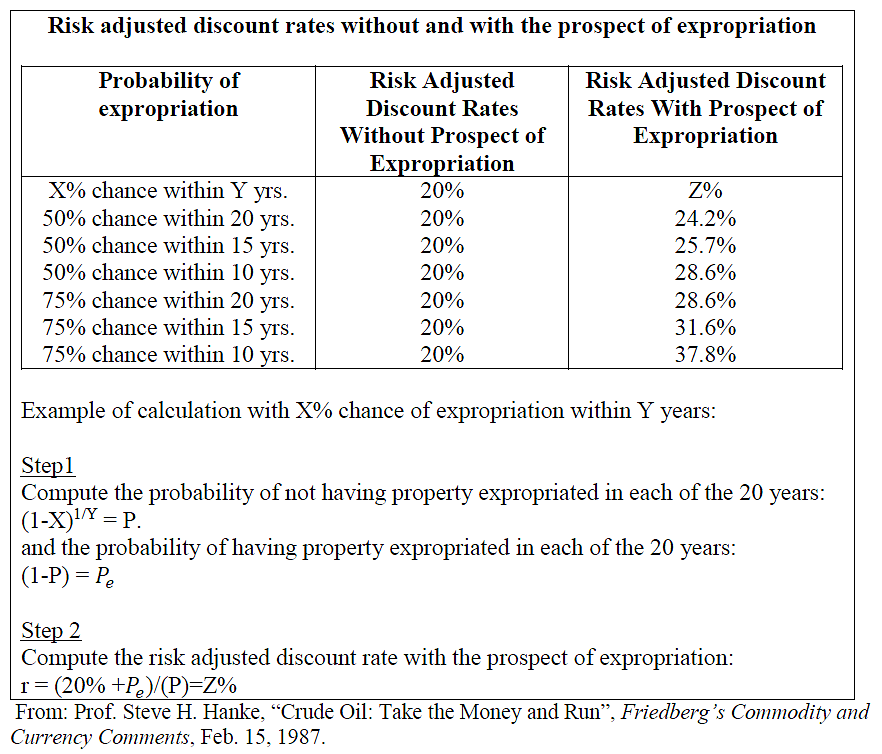 Thank you Morry. We miss you.