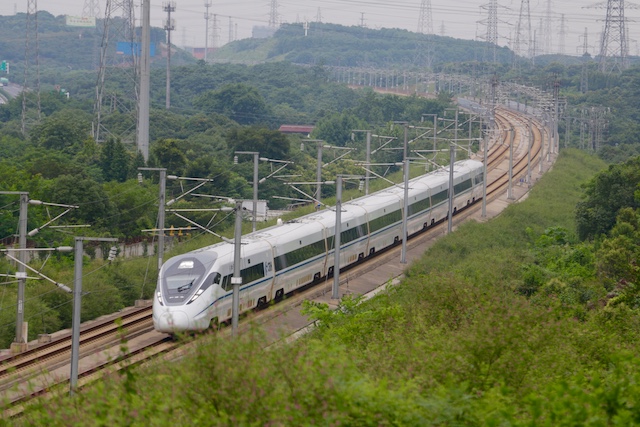 The reinvented jet airliner: less than half the speed, more than six times the cost, and doesn’t go where you want to go. Photo by Cobaltum.

This wondrous invention will become a reality if the federal government spends a mere one, two, or possibly three or four trillion dollars. Does that sound like a good deal? No? Yet that is exactly what high‐​speed rail advocates are proposing. Some proposals, such as the Green New Deal, even call for almost completely replacing low‐​cost, fast jet airliners with high‐​cost, relatively slow trains.

High‐​speed rail advocates get very emotional when you point these facts out to them. Case in point: a young urban planner named Sam Sklar totally freaked out when he read a 975‐​word blog post I wrote about high‐​speed rail a few weeks ago. His 5,750-word response called my post “the single dumbest article” he ever read. Yet all his response proves is that he doesn’t understand such basic concepts as the difference between taxes and user fees, long division, large numbers, and obsolete technologies.

I pointed out that, unlike the high‐​speed rail, toll roads pay for themselves, which almost everyone except Sklar understands is shorthand for meaning the users pay for the roads. “The roads don’t ‘pay for themselves,’” exclaims Sklar. “Someone has to pay for them.… Drivers pay tolls and tolls are regressive.”

Excuse me? Since when is paying for what you use, and not having to pay for what someone else uses, regressive? Tolls are not regressive provided the revenues actually pay for the roads people drive on and are not diverted to some transit megaproject.

My blog post pointed out that average airfares in 2019 were under 14 cents per passenger mile while average fares on Amtrak’s high‐​speed Acela were more than 90 cents per passenger mile. To support the latter number, I included a link to an Amtrak annual report that listed fare revenues and passenger miles by train, including the Acela. Sklar confessed that he was “baffled” by this because he looked up the report I cited and wasn’t able to perform this simple arithmetic.

Instead, he looked up the fares for all Amtrak trains, the vast majority of which are low‐​speed trains, and found they averaged 42 cents a passenger mile, less than half the number I claimed. Apparently, he doesn’t understand that running trains at more than 200 miles per hour costs a lot more than running them at less than 80 miles per hour.

Sklar also appears to be baffled by large numbers such as trillions, as he pretty much ignored my estimates that building the skeletal, 8,600-mile high‐​speed rail system proposed by President Obama in 2009 would cost well over a trillion dollars. Considering that California is spending $100 million per mile to build high‐​speed rail on flat ground and estimates it will cost $200 million per mile to build in hilly territory, the more elaborate high‐​speed rail system featured in Sklar’s response, which is nearly 20,000 miles long, would cost well over $3 trillion.

How much is a trillion dollars? It is enough money to buy every major transportation company in this country, including BNSF, CSX, Kansas City Southern, Norfolk Southern, and Union Pacific railroads; Alaska, American, Delta, Southwest, and United airlines; General Motors, Ford, and Fiat Chrysler; and still leave more than $250 billion left over for UPS, Fedex, and various other transport companies.

But that same trillion dollars won’t be enough to build Obama’s high‐​speed rail system that completely misses such major cities as Denver, Las Vegas, Nashville, and Phoenix and doesn’t connect Houston with San Antonio, Jacksonville with Orlando, Buffalo with Cleveland, Pittsburgh with Columbus, or many other city pairs. And that high cost doesn’t seem to bother Sklar and other high‐​speed rail supporters at all.

Finally, the heart of my article was that high‐​speed rail was an obsolete technology because it is slower than flying, less convenient than driving, and more expensive than both. Sklar’s response is that “almost every developed country” in the world except the U.S. has it, so it must not be obsolete. In fact, only about a dozen countries have true high‐​speed rail; among the many that don’t are Australia, Austria, Canada, Denmark, New Zealand, Sweden, and Switzerland, to name a few.

The United States doesn’t have a huge base of low‐​speed train riders who will jump on the high‐​speed trains. In 2019, Americans traveled an average of more than 15,000 miles by automobile, 2,200 miles by airplane, and 19 miles by Amtrak. Passenger trains, no matter how fast they go, are functionally obsolete in the United States, and will eventually be seen as obsolete in other countries as well.

I apologize to Sam Sklar for my failure to communicate these basic concepts to him in my short article. I have written a much more detailed paper on high‐​speed rail that will soon be published by the Cato Institute. I hope that will settle any misunderstandings that remain between us.