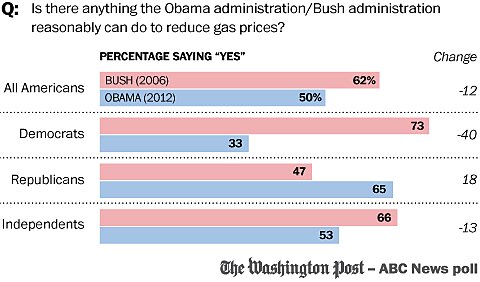 Pretty clear Red Team/Blue Team answers. Republicans in 2006 accepted that there wasn't much the president could do to reduce gas prices, but most of them think Obama could. Democrats show an even sharper shift; they overwhelmingly said that Bush could bring prices down, but few expect Obama to do so. I hope the fact that both Independents and Americans as a whole are 12-13 points less likely to think that presidents set gas prices is a sign of improvement in general economic understanding.

Back around 2003 or 2004 a colleague was escorted through the hallways of CNN by a junior staffer or intern, who asked him, "Do you think Bush is raising gas prices now so he can lower them before the election?" With perceptions like that among budding journalists, is there any hope for better public understanding of economics?

For examples of informed and nonpartisan analysis of gas prices, check out