For more than two weeks Hurricane Hermine (including, its pre-hurricane and post-hurricane life) was prominent in the daily news cycle.  It threatened, at one time or another, destruction along U.S. coastlines from the southern tip of Florida westward to New Orleans and northward to Cape Cod.  Hurricane/global warming stories, relegated to the hell of the formerly attractive by the record-long absence of a major hurricane strike on U.S. shores, were being spiffed up and readied for publication just as soon as disaster would strike.  But, alas, Hermine didn’t cooperate, arguably generating more bluster in the press than on the ground, although some very exposed stretches of North Florida did incur some damage.

Like Jessie, Woody and Stinky Pete in Toy Story 2, the hurricane/global warming stories have been put back in their boxes (if only they could be sent to a museum!).

But, they didn’t have to be. There was much that could have been written speculating on the role of global warming in the Hermine’s evolution—but it’s just not politically correct.

With a bit of thought-provocation provided by newly-minted Cato Adjunct Scholar Dr. Ryan Maue—one of the best and brightest minds in the  world on issues of tropical cyclone/climate interactions (and other extreme weather types)—we’ll review Hermine’s life history and consider what factors “consistent with” human-caused climate change may have shaped its outcome.

We look forward to having Ryan’s more formal input into our future climate change discussions, but didn’t want to pass up an opportunity to work some of his thoughts into our Hermine recap—for who knows, we may have to wait another 10 years for a Florida hurricane landfall!

Hermine was probably the most hyped category 1 hurricane in history—thanks to a large media constituency hungry for weather disaster stories to link with climate change peril.

Widespread access to weather forecast models and a thirst to be first with the story of impending global-warming fueled doom led to wild speculation in the media (both new and traditional) about “worst case scenarios” of a “major hurricane” landfall nearly a full week prior to the nascent swirl in the tropical atmosphere becoming an officially designated tropical cyclone by the National Hurricane Center. As “Invest 99L” (as it was originally designated) trudged westward through the tropical Atlantic environs during the week of August 22nd, it was struggling to maintain its life, much less its worst case aspirations. Pretty much every day you could find reports of a potentially dire impact from the Florida East Coast all the way through waterlogged Louisiana.

To hear it told, the combination of unusually warm water, the lack of recent hurricane landfalls and rising sea levels set the stage for a disaster.

Invest 99L ultimately did survive an unfavorable stretch of environmental conditions in the Florida Straits and eventually, in the Gulf of Mexico, grew into Hurricane Hermine and became the first in over 10 years to make landfall in Florida when it came ashore near St. Marks in the early morning hours of Friday, September 2nd. It was a category 1 hurricane at landfall and caused some coastal flooding along Florida’s Gulf Coast and knocked out power to more than 100,000 homes and businesses in the Tallahassee area.  In reality, no hurricane-force sustained winds were measured onshore.

As it turned out, Hermine’s post-tropical remnants travelled further offshore than originally anticipated and never quite attainted projected strength—a combination which resulted in much less onshore impact than was being advertised, with much grumbling from those who felt had cancelled their vacation plans for nothing.

In the end, Hermine’s hype was much worse than its bite. But all the while, if folks really wanted to write stories about how storm behavior is “consistent with” factors related to global warming, they most certainly could.

For example, regarding Hermine, Ryan sent out this string of post-event tweets: 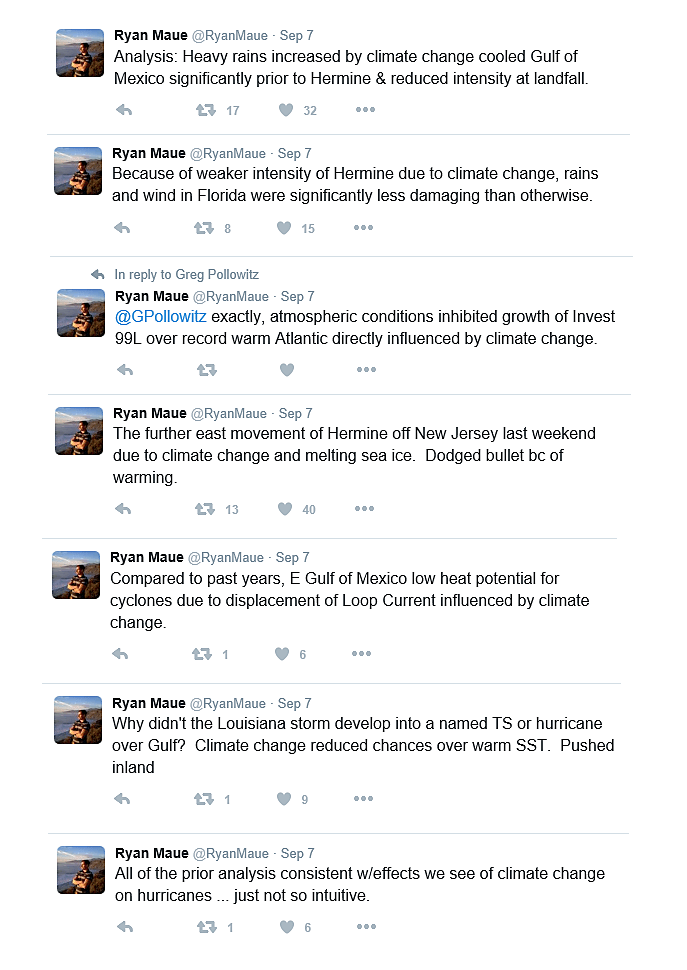 As is well known, we have gone much further than we ever have without a Category 3 (major) or higher hurricane strike.  The last was nearly 11 years ago, when Wilma struck south Florida on October 24, 2005.  With regard to this and the reduced frequency of U.S. strikes in general, hurricane researcher Chunzai Wang from NOAA’s Atlantic Oceanographic and Meteorological Laboratory  gave an informative presentation about a year ago, titled “Impacts of the Atlantic Warm Pool on Atlantic Hurricanes.” It included this bullet point:

In an article we wrote a few years back titled “Global Savings: Billion-Dollar Weather Events Averted by Global Warming,” we listed several other examples of elements “consistent with” climate change that may inhibit Atlantic tropical cyclone development and avert, or mitigate, disaster—these include increased vertical wind shear, changes in atmospheric steering currents, and Saharan dust injections.

But, you have probably never read any stories elsewhere that human-caused climate changes may be acting to lessen the menace of Atlantic hurricane strikes on the U.S. Instead you’ve no doubt read that “dumb luck” is the reason why hurricanes have been eluding our shores and why, according to the Washington Post, our decade-plus major hurricane drought is “terrifying” (in part, because of climate change).

We have little wonder why.