I have a new piece up at For​eign​Pol​i​cy​.com on Ron Paul and the Republican Party, focused in particular on the strong support that Paul draws from young people, with some additional speculation about where those young people will end up, if and when Paul steps back from his very public role. My instincts are that these young people are motivated at least as much by the ideas that Paul espouses as by Ron Paul, the person. If I am correct, many of them are likely to remain active in politics. I close with a warning to GOP leaders that they would be making a grave error if they ignored this libertarian‐​leaning voting bloc. Unfortunately, that is what the GOP’s leading candidate, Mitt Romney, seems to be doing by pushing a short‐​sighted plan for boosting military spending at a time when the country is awash in debt.


I have always been puzzled by the fact that conservatives who rail against welfare dependency here at home miss the pernicious effects of security dependency among our allies. Tim Pawlenty didn’t get it. Neither does Mitt Romney. Rather than questioning the mantras that have guided U.S. foreign policy for over a generation, Romney simply assumes that the United States will remain the world’s policeman, other countries will continue to free‐​ride on our security guarantees, and U.S. taxpayers will happily foot the bill. He proposes spending at least four percent of GDP on the military’s base budget, plus whatever additional money might be needed to fight the wars that he wants to fight (for example, this one).


I commented on the Four Percent Gimmick a few months ago, and now I have a bit more detail about Romney’s plan relative to the Obama administration’s latest 10‐​year projections. I alluded to these numbers in the For​eign​Pol​i​cy​.com piece, and below provide some more detail. (I am grateful, as always, for the help of my colleague Charles Zakaib in sorting through these, and in preparing the charts).

The chart above shows spending in nominal, current‐​year dollars, over the next ten years. The Obama administration plans to spend $5.7 trillion between 2013 and 2022 (the blue bars). If Romney keeps his promise of four percent for defense, he will spend at least $8.3 trillion (using OMB’s GDP projections) over that same period, an additional $2.58 trillion (the yellow bars). His budget in 2022 would top $1 trillion, and would be at least 61 percent higher than Barack Obama’s. He hasn’t said what other spending he will cut, or what taxes he would increase, to cover that difference. Until he does, it is logical to conclude that he plans to pile on more debt.


And we should remember that current laws call for even less spending than President Obama has proposed, but he has chosen to ignore the sequestration provisions of the Budget Control Act. GOP leaders in Congress seem equally disinterested in following through on their promise to kick the spending habit, and several have put forward plans to undo sequestration for the Department of Defense. Either way, the bottom line is more debt. As I speculate at For​eign​Pol​i​cy​.com, no wonder young people seem to like Ron Paul so much (and Mitt Romney so little).


Another way to demonstrate the absurdity of Romney’s plan is to control for inflation and compare it to future and past trends. Looking ahead, in constant, 2012 dollars, annual Pentagon spending will average $744.8 billion over the next ten years — again assuming the same GDP projections as Obama’s plan. That is 44 percent higher than Obama’s average budget (the bright pink line) over that same period, and nearly 59 percent higher than sequestration (the dark red line).


Now consider how this compares with the recent past. As you can see, Romney’s Four Percent Gimmick would result in taxpayers spending more than twice as much on the Pentagon as in 2000 (111 percent higher, to be precise), and 45 percent more than in 1985, the height of the Reagan buildup. Over the next ten years, Romney’s annual spending (in constant dollars) for the Pentagon would average 64 percent higher than annual post‐​Cold War budgets (1990−2012), and 42 percent more than the average during the Reagan era (1981−1989). 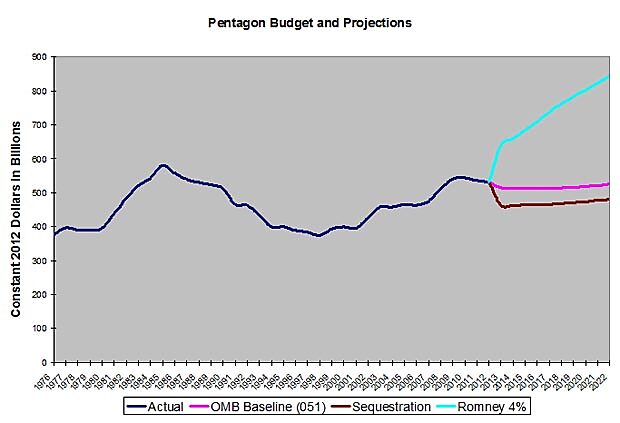 Mitt Romney may genuinely believe that today’s enemies are 42 percent more frightening than the big bad Soviets. He might believe that spending an average of $450 billion (in constant dollars) every year since 1990 has left the country dangerously vulnerable. If that is true, he should say so. More importantly, however, he should be compelled to answer the question on everyone’s mind: Where is he going to get the money to fund his Pentagon spending binge?


Cross‐​posted from the Skeptics at the National Interest.