Read All About It! Heat Dries Things Up!

No one doubts that much of the West, especially California, has been very droughty since the turn of the century, and that heat and drought are highly correlated. So it seemed surprising that it was big news last week that forest fires, which require dry fuel, are on the increase out there.

University of Idaho’s John Abatzoglou and Columbia’s A. Park Williams used a large family of climate models to calculate various indices of western aridity (they used eight different measures), which were then related to the burned-out area every year. About half of the increase since the mid-1980s was related to climate-modelled warming. The other half, they say, was from other causes, including natural variability. The authors also note that some forest management practices may be contributing to the increasing burn.

The notion that this much drying is caused by dreaded global warming is what made the papers.

Should we use models that can’t even get close to the real-world evolution of lower atmospheric temperatures in recent decades to determine how much climate change is human-caused? That’s what they did—assuming only warming that was not modelled was “natural.” To say the least, that’s a heavy logical lift when it is so clear that the models are predicting far too much warming in the lower layers.

It is all too human to not let some else’s work get in the way of your confirmation bias. So there’s no mention of another explanation for why it’s so hot and dry there. Writing in the same journal that the fire work was published in, the Proceedings of the National Academy of Sciences (PNAS), two other western researchers, James Johnstone and Nathan Mantua, demonstrated that virtually all of the temperature changes in California and the West are related to changes in atmospheric pressure patterns that occur with or without global warming. That was first published in 2014, but there is no reference to it whatsoever in the fire paper.

Nor is there any reference to the most comprehensive study of western fires—some 33,000 of them—by Argentina’s Thomas Kitzberger showing that for centuries the distribution and frequency of western fires is related to well-known atmospheric patterns over  both the North Pacific and North Atlantic, not global warming. It too was published in PNAS, in 2007.

But we digress. Aridity is largely driven by temperature (warmth) and precipitation. Unfortunately, only two of their eight measures of dryness are very sensitive to rainfall variability.

Climate models have pretty much no skill in estimating precipitation. But they do predict warming, and western (particularly California and Arizona) temperatures are higher than they were. So, absent any precipitation data, they are guaranteed to paint a drying picture and therefore an increase in fire extent.

The six aridity indicators that are not particularly influenced by precipitation instead are primarily temperature-driven. Not surprisingly, these show much greater increases in aridity than the other two.

Here’s an example from the heavily forested northwest states of Idaho, Washington and Oregon. One of the aridity indicators is the Palmer Drought Severity Index (PDSI), an old warhorse that has been used to assess long-term moisture status since it was first published in 1965 by Wayne Palmer, a scientist at the (then) U.S. Weather Bureau.

Our first figure shows the relationship between observed summer temperatures and the PDSI.  Note that the more negative the PDSI is, the more droughty it is, and vice-versa for wetness. 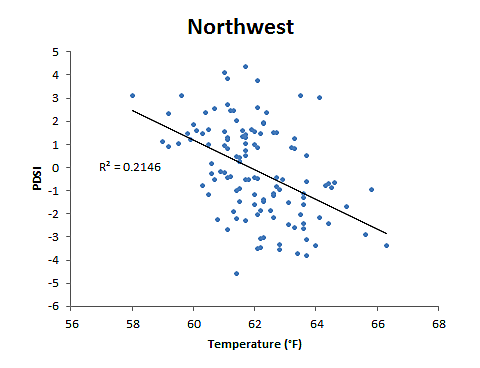 That’s the variable that the models as consistent with in their projections, and it explains about 20 per cent of the summer-to-summer behavior of the PSDI since 1895.

What about the other component—precipitation—in which model predictions are all over the map?  We show that in Figure 2. 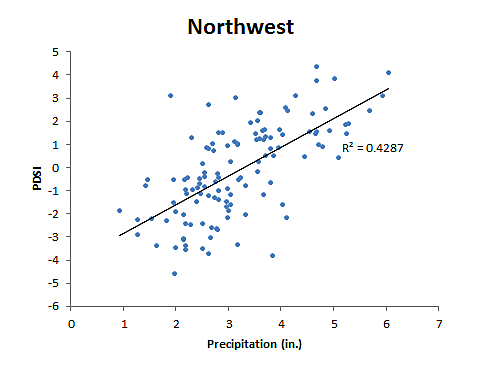 In this area, about twice as much of much of the PDSI behavior is predicted by rainfall than by temperature.

A different situation obtains as one moves further south, with temperature more important because it doesn’t rain very much in the period we are looking at here (summer).  In droughty California any significant summer rain aside from occasional mountain thunderstorms is usually front-page news.  If you average across the entire area, the contributions of the two predictors are pretty much equivalent.

If dryness is driven both by temperature and precipitation, and we can’t predict the latter, then climate models guarantee a positive relationship between climate change and fire in a warming world. This is exactly what this paper shows.  Is such a prescribed result actually news?

Abatzogloua, J. T. and A. P, Williams, 2016. Impact of anthropogenic climate change on wildfire across western US forests. Proceedings of the National Academy of Sciences, doi:10.1073/pnas.1607171113.