We have an amazing man-bites-dog story today.

Let's begin with some background information. A member of the European Commission recently warned that:

"Tax increases imposed by the Socialist-led government in France have reached a “fatal level”...[and] that a series of tax hikes since the Socialists took power 14 months ago – including €33bn in new taxes this year – threatens to “destroy growth and handicap the creation of jobs”.

Given the pervasive statism of the European Commission, that was a remarkable admission. 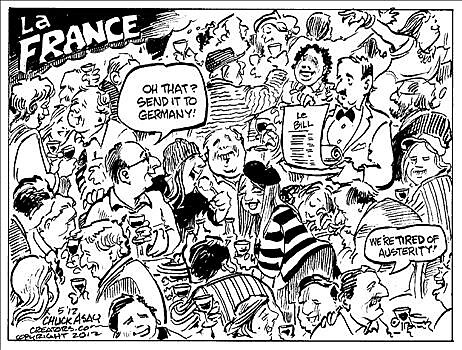 But the Commissioner who issued that warning, Olli Rehn, is Finnish, so French politicians presumably don't listen to his advice any more than they listen to the thoughtful, well-meaning, and generous suggestions I make.

Indeed, based on the actions of the current President and the former President, we can say with great confidence that French politicians compete over who can pursue the most misguided policies.

But maybe, just maybe, there are some people inside France who realize the house of cards is in danger of collapse.

Here are some excerpts from a story I never thought I would read. At least one senior official in France has woken up to the dangers of ever-rising taxes and an always-growing burden of government spending.

France's state auditor urged the government Tuesday to redouble efforts to limit spending rather than increases taxes... The head of the state auditor, Didier Migaud, said the interruption in deficit reduction stemmed primarily from lower-than-expected tax revenue, due to the weak economy. Yet, he said "the spiraling welfare debt was particularly abnormal and particularly dangerous." During his first year in power, President François Hollande relied on large tax increases to plug holes in public finances, including social programs such as pensions, unemployment benefits and health care. But economic stagnation in 2012, coupled with a mild recession at the start of 2013, has waylaid the plan, while both companies and households are crying foul over what some have called "a tax overdose." Mr. Migaud added his voice, saying: "The strategy of fixing the system by collecting new revenue is reaching its limits."

Before any further analysis, I have to make one correction to the story. Hollande's plan was not "waylaid" by a recession. Instead, his policies doubtlessly helped cause a recession. You don't impose huge tax hikes on productive behavior without some sort of negative impact on economic performance.

So the "holes in public finances" are at least partially a result of the Laffer Curve. As I've repeatedly warned, higher tax rates rarely - if ever - collect as much money as politicians expect. 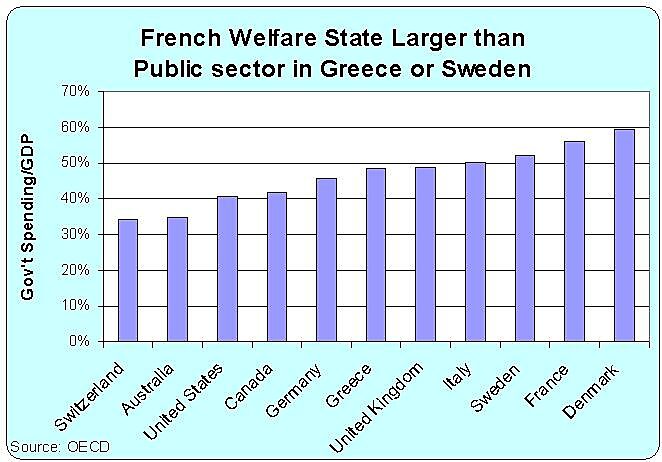 Returning to the specific case of France, the fiscal variable that should set off the most alarm bells is that the burden of government spending has soared to 57 percent of GDP. And based on projections from the BIS, OECD, and IMF, that number is going to get even worse in the future.

This is the data that presumably has convinced Monsieur Migaud that France is approaching the point of no return on taxes and spending.

Interestingly, the French people may be ahead of their politicians. Polling data from 2010 and 2013 show that ordinary people very much understand the need to limit the size and scope of government.

Heck, a majority of French people have said they would be interested in escaping to the United States if they had the opportunity. And successful people already have been leaving the country because of punitive tax rates.

But I'm not sure I believe the aforementioned polls. If the French people genuinely have sound views, why do they keep electing bad politicians? Of course, the same thing could be said about the United States, so perhaps I shouldn't throw stones in my glass house.

P.S. My favorite example of government running amok in France is the law threatening three years in jail if you say your husband is a fat slob or if you accuse your wife of being a nag.

P.P.S. The most vile French official may be the current Prime Minister, who actually had the gall to complain that some of his intended victims weren't quietly entering the slaughterhouse.

P.P.P.S. Just in case you think I'm exaggerating about France being a fiscal hellhole, more than 8,000 households last year were subjected to a tax burden of more than 100 percent . Obama must be very envious.