In his Kentucky Republican primary victory speech last night, Rand Paul took a well‐​placed shot at one of the more repulsive props used by Beltway politicians:

“We have come to take our government back from the special interests who think that the federal government is their own personal ATM … from the politicians who bring us over‐​sized fake checks emblazoned with their signature as if it was their money to give.”

The comment immediately brought to mind a C@L blog I wrote in 2008 that criticized the Senate Minority Leader from Kentucky, Republican Mitch McConnell, for being a hypocrite when it comes to big government spending. I titled the post “The Bluegrass Porker” and included this picture: 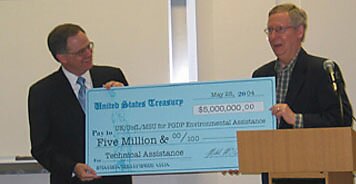