Rand and Hayek on NPR 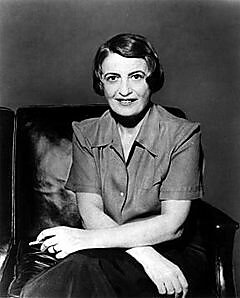 NPR started a three‐​part series this morning on influential intellectuals. They looked at Ayn Rand this morning, and there are reports that they will cover F. A. Hayek tomorrow and John Maynard Keynes Wednesday. The segment quotes Rand from a televised interview with Mike Wallace (which you can view at the link) and then comments on the prevalence of her ideas today:

“Both parties today are for socialism, in effect — for controls. And there is no party, there are no voices, to offer an actual pro‐​capitalist, laissez‐​faire, economic freedom and individualism,” she said. “That is what this country needs today.”


If Rand were alive today, she might be pleased to see that, more and more, Americans do have that choice. And her ideas are alive and well‐​represented in the U.S. Capitol.

The “objectivity” of ruthless plunderers from a displaced Russian bourgoise who refused to acknowledge the punishment of her class was brought on by its crimes against the people. Objective thinking people accept responsibility for their actions and the consequences that follow.

Marxism may be dead in Russia, but not in the NPR listener community! No doubt this commenter is knitting the names of American bourgeoisie who will one day be sent to gulags.