Greece is expected to default on its government debts tomorrow as its bailout package from the European Union (EU) expires. The country will also hold a referendum on Friday on whether to accept the latest round of terms from its EU funders. Greece continues to grab all the headlines, but there is another government closer to home that is in a similar situation: Puerto Rico. Over the weekend, the governor of the island announced that Puerto Rico is unable to repay its $70 billion in debt.

A U.S. commonwealth with a population of 3.6 million, Puerto Rico carries more debt per capita than any state in the country. The island has been staggering under the increasing weight of those obligations for years as its economy has tanked, triggering an exodus of island residents to the mainland not seen since the 1950s.


Meanwhile, the government has raised taxes, cut government employment and slashed pensions in a futile effort to get its debt burden under control. Those actions have only slowed the acceleration of debt creation, while harming efforts to reignite the economy.

The island has several sources of debt comprising the $70 billion. Its debt‐​to‐​GDP ratio is 70 percent. The average U.S. state is closer to 15 percent. Rhode Island, the state with the highest debt‐​to‐​GDP ratio, is just under 20 percent. This infographic from the Wall Street Journal shows the magnitude of Puerto Rico’s outstanding debt. 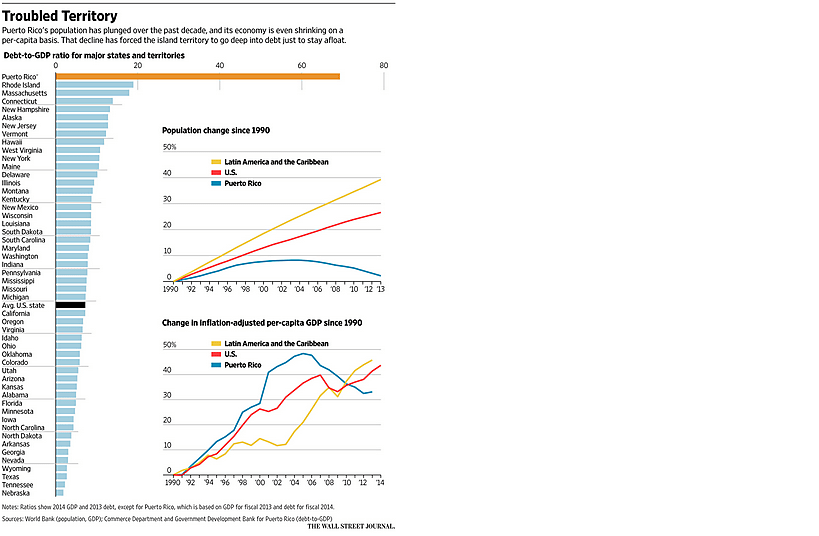 The Washington Post reports that its debt is compromised of several large types:

The island’s web of debt includes general‐​obligation bonds, which Puerto Rico’s constitution says must be repaid even before government workers receive their pay.


But billions of dollars more in bonds were floated by public corporations that provide critical services on the island, including providing electric power, building roads and running water and sewer authorities. Beyond the bond debt, the island owes some $37 billion in pension obligations to workers and former workers.

The island’s electricity company is expected to miss a payment this week, according to the Wall Street Journal.


A larger challenge for Puerto Rico is that federal bankruptcy code prevents the island (and states) from filing bankruptcy. That gives Puerto Rico two choices. It can continue to work out a deal with creditors to refinance its outstanding debts, or it could push Congress to provide some sort of bailout.


The idea of state bailouts was discussed some in Congress in 2010 and 2011 as state budgets struggled to handle the effects of the Great Recession. The idea is just as bad now as it was then. Providing a bailout would reward Puerto Rican policymakers for their years of irresponsible choices and should be a non‐​starter in Congress.


Instead, Puerto Rico should continue to limit its spending to help lower its outstanding debt obligations. It will be an incredibly tough road to manage, but that is the cost of years of mismanagement and failing to acknowledge the realities of the island’s fiscal situation.