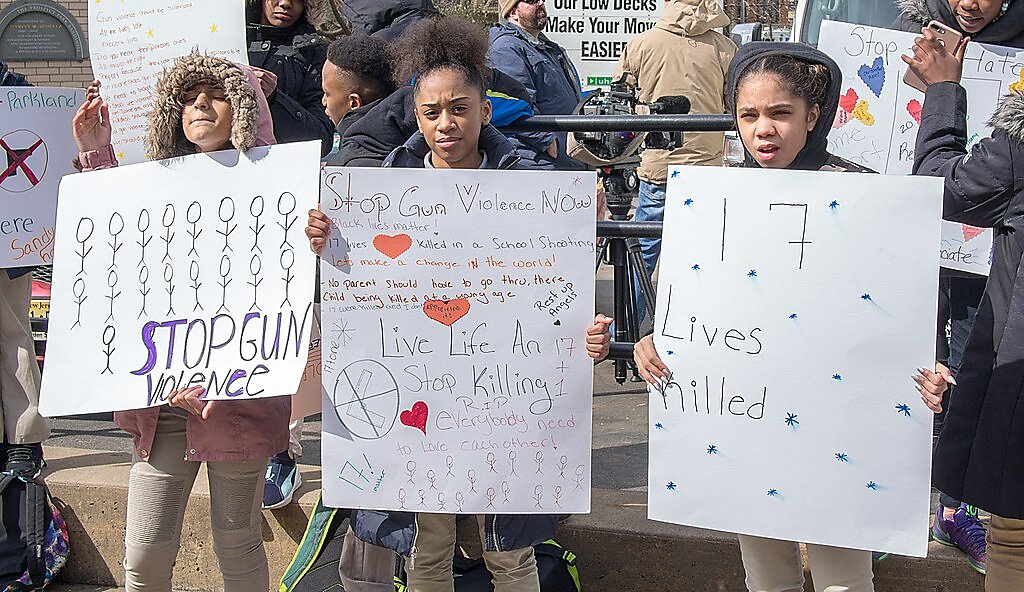 The country saw other kinds of identity and values‐​based battles in March, but the month was dominated by one thing: guns, especially how you protest against them, for them, or try your best to stay neutral.


Of the 24 conflicts recorded on the Battle Map in March, 15 involved guns in some way. The large majority were directly about the March 14 National School Walkout, primarily whether schools should allow walkouts without ramifications in support of free speech; whether concerns about order and safety required that those who walked out be punished; if allowing a walkout to protest gun violence but not other causes amounted to viewpoint discrimination; and what to say, if anything, in events held in lieu of walkouts. Gun‐​related conflicts were recorded in Pennsylvania, North Carolina, New Jersey, Illinois, New York, California, Arkansas, Michigan, Ohio, and South Carolina, and there were likely many we did not find.


Among the incidents that got the most press attention was the case of Rocklin, CA teacher Julianne Benzel, who was apparently suspended by the district for holding an in‐​class discussion in which she mused that if an anti‐​gun walkout were allowed, so should a protest opposing abortion, lest the district treat some views unequally. So intrigued by the idea was student Brandon Gillespie that he planned a national pro‐​life walkout on April 11, which may well be a prominent battle in the April Dispatch. In a reversal of the expected walkout fear—kids getting in trouble for walking out in protest—a student in Hilliard City, Ohio, was punished for staying in his classroom during outdoor activities sanctioned by the school on Walkout Day. District officials said the student was punished for failing to go to the right place for students choosing not to participate, but the boy’s father said, “He was uncomfortable…as he thought that going outside would most likely be politicizing a horrific event which he wanted no part of.” Finally, a girl in New Jersey was punished for walking out, but what grabbed headlines was that the school would not accept roughly $1000 worth of flowers sent to her by people who admired her standing up for what she believed in. Said the student, “They’re always like, ‘You can always speak your mind and stuff, you have the freedom of speech here,’ and then when we do it, we’re always getting in trouble.”


Public schools absolutely upholding freedom of expression is impossible unless schools have no rules about what you can wear or say, when, about what, and to whom. But having no rules would render effective teaching very difficult, if not impossible. Not surprisingly, this tends to come to a head with highly charged issues like the war in Vietnam, or gun violence, especially when schools and students are so immediately affected by them. It is no coincidence that of all the polls we’ve put on the Battle Map Facebook page the one that has gotten by far the most attention—as the Dispatch reported last month—was about guns in schools. And it is not surprising to see quotes like this from coverage of a battle in Lacey Township, New Jersey, where two students were suspended for a Facebook post showing pictures of a family trip to a gun range: “People like us are under attack,” said resident John Pinto.


No one should feel besieged by the schools for which they must pay. But we know that they often do, because when opposing views collide in public schools, one must lose. School choice would go a long way to ending that.