In light of "libertarianish" Sen. Rand Paul’s recently announced candidacy for president, the New York Times’ Paul Krugman veered into public opinion to make a bold claim that most Americans are either liberal or conservative and little else.

He explains that in theory there could be more than simply liberals and conservatives. For instance, if political attitudes were structured along multiple dimensions like along economics and social issues, that would produce at least four different ideological groups:

Yet, without referencing data, he asserts that in practice few people exist in the libertarian or “hard hat” (or communitarian) boxes. His graphic is pasted below:

For this reason, it’s not surprising that statisticians and academics used survey data in response to Krugman to demonstrate that Americans are more complicated than just red and blue. For instance, Nate Silver at FiveThirtyEight cross-tabs support for wealth redistribution and same-sex marriage to show about a quarter of Americans fit in the libertarian box: oppose income redistribution and support marriage equality.

However, one could argue that by this definition, based on only these two questions, Paul (who indirectly instigated this debate) may not even be categorized in the “libertarian” box.

Figure 1 uses survey data from the American National Election Study Evaluations of Government and Society Survey 2 (EGSS 2). I average responses to several questions about economics to create an “economic issues scale” scaled from liberal to conservative. Similarly, I use questions about immigration and religion for a “social issues scale” scaled from liberal to conservative. (All question wording is found in the footnotes below.) Thus, each respondent is assigned an “economics” and “social” ideology score used to map their ideological coordinates and placement in one of the four boxes.

Where Do The People Live, Politically Speaking? 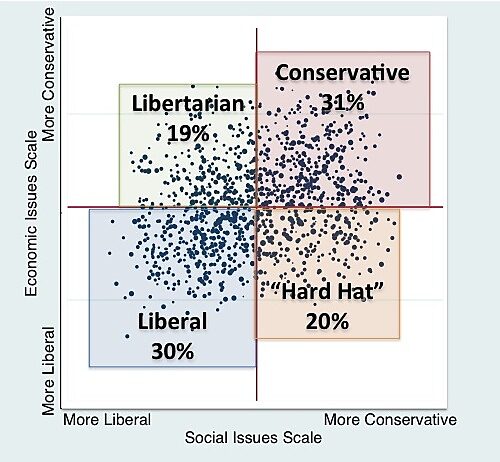 These measures also find that 31 percent conform to traditional conservative and 30 percent to traditional liberal issues positions on both economic and social issues respectively.

What’s helpful about these graphs is that we can map out spatially where Americans are politically relative to each other. We can notice that Americans are not grouped together as pundits may believe and politicians may desire.

Notably, the share of libertarians and “hard-hats” is contingent upon the questions asked.

Figure 2 plots the ideological coordinates for individual survey respondents based on their answers to economic issues questions (y-axis) and criminal justice reform issues (x-axis). In fact, the criminal justice questions map onto issues differentiating Paul from other Republican presidential contenders. These variables include support for allowing nonviolent offenders to petition to have their court records sealed, perception of racial bias in the criminal justice system, and support/opposition to racial profiling. (Question wordings found in footnotes.)

Once again, the libertarian and “hard hat” buckets are quite full. Some 24 percent are in the libertarian bucket because respondents give “liberal” responses to criminal justice reform questions and conservative responses to economic questions. Another 15 percent are in the “hard hat” bucket because they expressed more conservative opinions on criminal justice issues and liberal views on fiscal issues. Another 33 percent were in the traditional liberal and 28 percent in the conservative buckets. 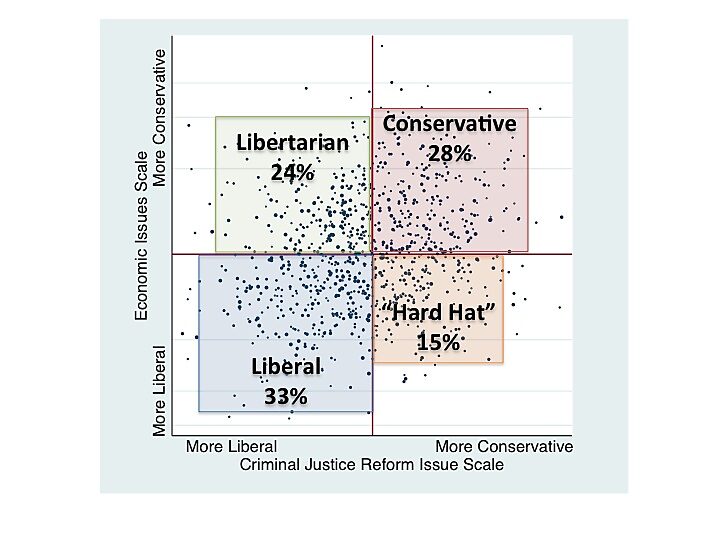 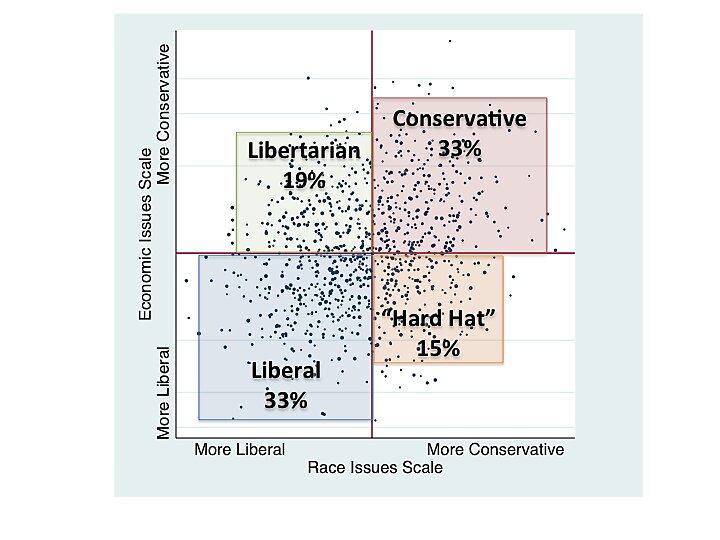 So what about traditional partisan groups? Where do they “live” in the political map? I map this in Figure 4. As expected, Republicans are more likely to cluster in the upper right, traditionally conservative quadrant, and Democrats in the lower left, traditionally liberal quadrant. Independents are fairly evenly distributed but slightly more represented in the hard hat and libertarian boxes.

Where Do the Republicans and Democrats Live?

This offers some insight as to why pundits tend to overlook the libertarian and hard hat boxes. Few groups seem to mobilize the libertarian and hard hat voters. Moreover, these Americans are somewhat less likely to vote and engage politically. Nearly equal shares of traditional liberals (72%) and conservatives (73%) said they were 100% likely to vote in the 2012 election, compared to 67 percent of libertarians and only 48 percent of hard hats.

When examining these groups’ other political activity, traditional liberals; (42%) were the most likely to have engaged in the 2012 election by calling an elected official, donating money or time to a campaign or cause, etc. However, only 22 percent of hard-hats did the same. Conservatives and libertarians were in the middle with about 3 in 10 engaging politically in 2012.

As some have said, “the world is run by those who show up.” Similarly, government goes to those who show up, and we pay attention to those who mobilize and engage. At the moment, hard hats and libertarians are often less likely to engage, mobilize, and vote, and thus perhaps more easily overlooked.

One will notice that the non-traditional Republican candidate Paul does the best (as does Jeb Bush) compared to their traditional Republican rivals in hypothetical matchups with Democratic frontrunner Hillary Clinton. Is Paul cutting into Clinton’s base? Or is he demonstrating an ability to mobilize new voters to his advantage? What about Bush? We’ll need more data to answer those questions.

Thinking beyond 2016, it stands to reason that candidates who choose to ignore hardhats and libertarians are at a disadvantage. Instead, candidates who seek to build larger coalitions outside of the traditional Democratic and Republican bases by appealing to libertarian and hardhat voters may find additional success.

Do you think that the government should provide more services than it does now, fewer services than it does now, or about the same number of services as it does now? How important is it to reduce the deficit? (Extremely important, very important, moderately important, a little important, or not important at all.) Different ways of handling the deficit have been considered. Which one of these do you prefer? (Do not reduce, tax increases only, spending cuts only, spending cuts & tax increases.) With the deficit in mind, do you favor raising, lowering, or keeping the same taxes for people who make more than $250,000 per year? Households with the highest 20% of incomes earn an average of 14.9 times as much money as households in the bottom 20%. Should this difference be larger, smaller, or about the same as it is now? Some people feel that the government in Washington should see to it that every person has a job and a good standard of living; Others think the government should just let each person get ahead on their own. Where would you place yourself on this scale? Do you think estates should not be taxed at all, only estates worth more than $5 million should be taxed, only estimates worth more than $1 million should be taxed, all estates should be taxed

It has been reported that some police officers stop motorists or pedestrians of certain racial or ethnic groups because the officers believe that these groups are more likely than others to commit certain types of crimes. Do you approve or disapprove of this practice by the police? In recent years, do you think too much has been made of the problems facing black people, too little has been made, or is it about right? Just your impression: do you think the criminal justice system in the United States (1) treats white Americans more fairly than black and Hispanic Americans, (2) treats black and Hispanic Americans more fairly than white Americans, or (3) are they treated about the same?

It has been reported that some police officers stop motorists or pedestrians of certain racial or ethnic groups because the officers believe that these groups are more likely than others to commit certain types of crimes. Do you approve or disapprove of this practice by the police? Do you favor or oppose allowing nonviolent drug offenders who have served their sentences to petition a court to have their court records sealed, making them inaccessible to the public without a court order? Just your impression: do you think the criminal justice system in the United States (1) treats white Americans more fairly than black and Hispanic Americans) (2) treats black and Hispanic Americans more fairly than white Americans, or (3) are they treated about the same?