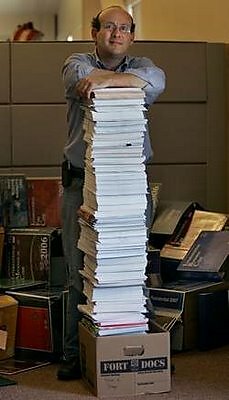 One of the high points of last week’s Gov 2.0 Summit was transparency champion Carl Malamud’s speech on the history of public access to government information — ending with a clarion call for government documents, data, and deliberation to be made more freely available online. The argument is a clear slam‐​dunk on simple grounds of fairness and democratic accountability. If we’re going to be bound by the decisions made by regulatory agencies and courts, surely at a bare minimum we’re all entitled to know what those decisions are and how they were arrived at. But as many of the participants at the conference stressed, it’s not enough for the data to be available — it’s important that it be free, and in a machine readable form. Here’s one example of why, involving the PACER system for court records:

The fees for bulk legal data are a significant barrier to free enterprise, but an insurmountable barrier for the public interest. Scholars, nonprofit groups, journalists, students, and just plain citizens wishing to analyze the functioning of our courts are shut out. Organizations such as the ACLU and EFF and scholars at law schools have long complained that research across all court filings in the federal judiciary is impossible, because an eight cent per page charge applied to tens of millions of pages makes it prohibitive to identify systematic discrimination, privacy violations, or other structural deficiencies in our courts.

If you’re thinking in terms of individual cases — even those involving hundreds or thousands of pages of documents — eight cents per page might not sound like a very serious barrier. If you’re trying to do a meta‐​analysis that looks for patterns and trends across the body of cases as a whole, not only is the formal fee going to be prohibitive in the aggregate, but even free access won’t be much help unless the documents are in a format that can be easily read and processed by computers, given the much higher cost of human CPU cycles. That goes double if you want to be able to look for relationships across multiple different types of documents and data sets.

All familiar enough to transparency boosters. Is there a reason proponents of limited government ought to be especially concerned with this, beyond a general fondness for openness? Here’s one reason. Public choice theorists often point to the problem of diffuse costs and concentrated benefits as a source of bad policy. In brief, a program that inefficiently transfers a million dollars from millions of taxpayers to a few beneficiaries will create a million dollar incentive for the beneficiaries to lobby on its behalf, while no individual taxpayer has much motivation to expend effort on recovering his tiny share of the benefit of axing the program. And political actors have similarly strong incentives to create identifiable constituencies who benefit from such programs and kick back those benefits in the form of either donations or public support. What Malamud and others point out is that one thing those concentrated beneficiaries end up doing is expending resources remaining fairly well informed about what government is doing — what regulations and expenditures are being contemplated — in order to be able to act for or against them in a timely fashion.


Now, as the costs of organizing dispersed people get lower thanks to new technologies, we’re seeing increasing opportunities to form ad hoc coalitions supporting and opposing policy changes with more dispersed costs and benefits — which is good, and works to erode the asymmetry that generates a lot of bad policy. But incumbent constituencies have the advantage of already being organized and able to invest resources in identifying policy changes that implicate their interests. If ten complex regulations are under consideration, and one creates a large benefit to an incumbent constituent while imposing smaller costs on a much larger group of people, it’s a great advantage if the incumbent is aware of the range of options in advance, and can push for their favored option, while the dispersed losers only become cognizant of it when the papers report on the passage of a specific rule and slowly begin teasing out its implications.


Put somewhat more briefly: Technology that lowers organizing costs can radically upset a truly pernicious public choice dynamic, but only if the information necessary to catalyze the formation of a blocking coalition is out there in a form that allows it to be sifted and analyzed by crowdsourced methods first. Transparency matters less when organizing costs are high, because the fight is ultimately going to be decided by a punch up between large, concentrated interest groups for whom the cost of hiring experts to learn about and analyze the implications of potential policy changes is relatively trivial. As transaction costs fall, and there’s potential for spontaneous, self‐​identifying coalitions to form, those information costs loom much larger. The timely availability — and aggregability — of information about the process of policy formation and its likely consequences then suddenly becomes a key determinant of the power of incumbent constituencies to control policy and extract rents.