Progress on the Laffer Curve*

The title of this piece has an asterisk because, unfortunately, we're not talking about progress on the Laffer Curve in the United States. 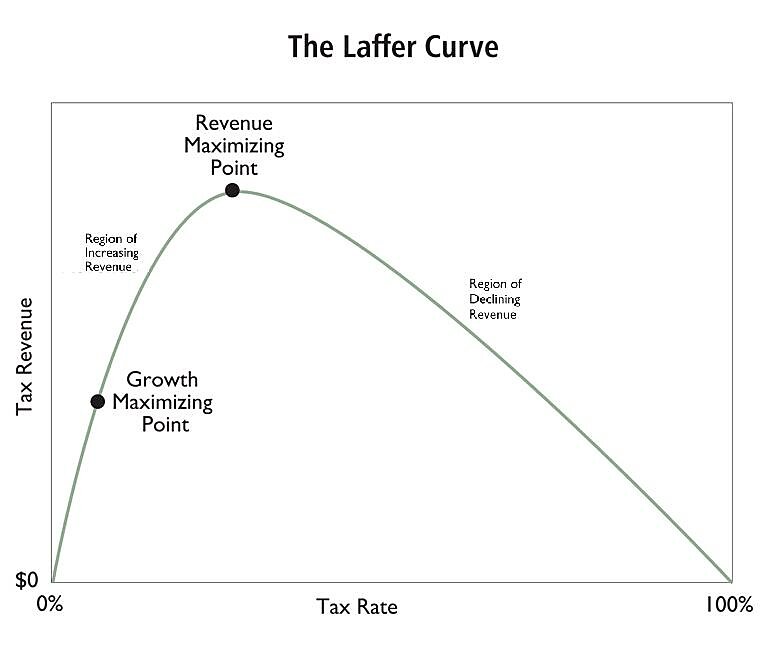 Instead, we're discussing today how lawmakers in other nations are beginning to recognize that it's absurdly inaccurate to predict the revenue impact of changes in tax rates without also trying to measure what happens to taxable income (if you want a short tutorial on the Laffer Curve, click here).

But I'm a firm believer that policies in other nations (for better or worse) are a very persuasive form of real-world evidence. Simply stated, if you're trying to convince a politician that a certain policy is worth pursuing, you'll have a much greater chance of success if you can point to tangible examples of how it has been successful.

That's why I cite Hong Kong and Singapore as examples of why free markets and small government are the best recipe for prosperity. It's also why I use nations such as New Zealand, Canada, and Estonia when arguing for a lower burden of government spending.

And it's why I'm quite encouraged that even the squishy Tory-Liberal coalition government in the United Kingdom has begun to acknowledge that the Laffer Curve should be part of the analysis when making major changes in taxation.

I don't know whether that's because they learned a lesson from the disastrous failure of Gordon Brown's class-warfare tax hike, or whether they feel they should do something good to compensate for bad tax policies they're pursuing in other areas, but I'm not going to quibble when politicians finally begin to move in the right direction.

The Wall Street Journal opines that this is a very worthwhile development.

Chancellor of the Exchequer George Osborne has cut Britain's corporate tax rate to 22% from 28% since taking office in 2010, with a further cut to 20% due in 2015. On paper, these tax cuts were predicted to "cost" Her Majesty's Treasury some £7.8 billion a year when fully phased in. But Mr. Osborne asked his department to figure out how much additional revenue would be generated by the higher investment, wages and productivity made possible by leaving that money in private hands.

By the way, I can't resist a bit of nit-picking at this point. The increases in investment, wages, and productivity all occur because the marginal corporate tax rate is reduced, not because more money is in private hands.

I'm all in favor of leaving more money in private hands, but you get more growth when you change relative prices to make productive behavior more rewarding. And this happens when you reduce the tax code's penalty on work compared to leisure and when you lower the tax on saving and investment compared to consumption.

The Wall Street Journal obviously understands this and was simply trying to avoid wordiness, so this is a friendly amendment rather than a criticism.

Anyhow, back to the editorial. The WSJ notes that the lower corporate tax rate in the United Kingdom is expected to lose far less revenue than was predicted by static estimates.

The Treasury's answer in a report this week is that extra growth and changed business behavior will likely recoup 45%-60% of that revenue. The report says that even that amount is almost certainly understated, since Treasury didn't attempt to model the effects of the lower rate on increased foreign investment or other "spillover benefits."

And maybe this more sensible approach eventually will spread to the United States.

...the results are especially notable because the U.K. Treasury gnomes are typically as bound by static-revenue accounting as are the American tax scorers at Congress's Joint Tax Committee. While the British rate cut is sizable, the U.S. has even more room to climb down the Laffer Curve because the top corporate rate is 35%, plus what the states add—9.x% in benighted Illinois, for example. This means the revenue feedback effects from a rate cut would be even more substantial.

The WSJ says America's corporate tax rate should be lowered, and there's no question that should be a priority since the United States now has the least competitive corporate tax system in the developed world (and we rank a lowly 94 out of the world's top 100 nations).

But the logic of the Laffer Curve also explains why we should lower personal tax rates. But it's not just curmudgeonly libertarians who are making this argument.


Even Keynes himself accepted this. Like many other economists throughout the ages, he understood and agreed with the principles that underpinned what eventually came to be known as the Laffer curve: that above a certain rate, hiking taxes further can actually lead to a fall in income, and cutting tax rates can actually lead to increased revenues.Writing in 1933, Keynes said that under certain circumstances “taxation may be so high as to defeat its object… given sufficient time to gather the fruits, a reduction of taxation will run a better chance than an increase of balancing the budget. For to take the opposite view today is to resemble a manufacturer who, running at a loss, decides to raise his price, and when his declining sales increase the loss, wrapping himself in the rectitude of plain arithmetic, decides that prudence requires him to raise the price still more—and who, when at last his account is balanced with nought on both sides, is still found righteously declaring that it would have been the act of a gambler to reduce the price when you were already making a loss.”

For what it's worth, Keynes also thought that it would be a mistake to let government get too large, having written that “25 percent [of GDP] as the maximum tolerable proportion of taxation.”

But let's stay on message and re-focus our attention on the Laffer Curve. Amazingly, it appears that even a few of our French friends are coming around on this issue.

Here are some portion of a report from the Paris-based Institute for Research in Economic and Fiscal Issues.

In an interview given to the newspaper Les Echos on November 18th, French Prime Minister Jean -Marc Ayrault finally understood that "the French tax system has become very complex, almost unreadable, and the French often do not understand its logic or are not convinced that what they are paying is fair and that this system is efficient." ...The Government was seriously disappointed when knowing that a shortfall of over 10 billion euros is expected in late 2013 according to calculations by the National Assembly. ...In fact, we have probably reached a threshold where taxation no longer brings in enough money to the Government because taxes weigh too much on production and growth.

This is a point that has also been acknowledged by France's state auditor. And even a member of the traditionally statist European Commission felt compelled to warn that French taxes had reached the point whether they “destroy growth and handicap the creation of jobs”

But don't hold your breath waiting for good reforms in France. I fear the current French government is too ideologically fixated on punishing the rich to make a shift toward more sensible tax policy. 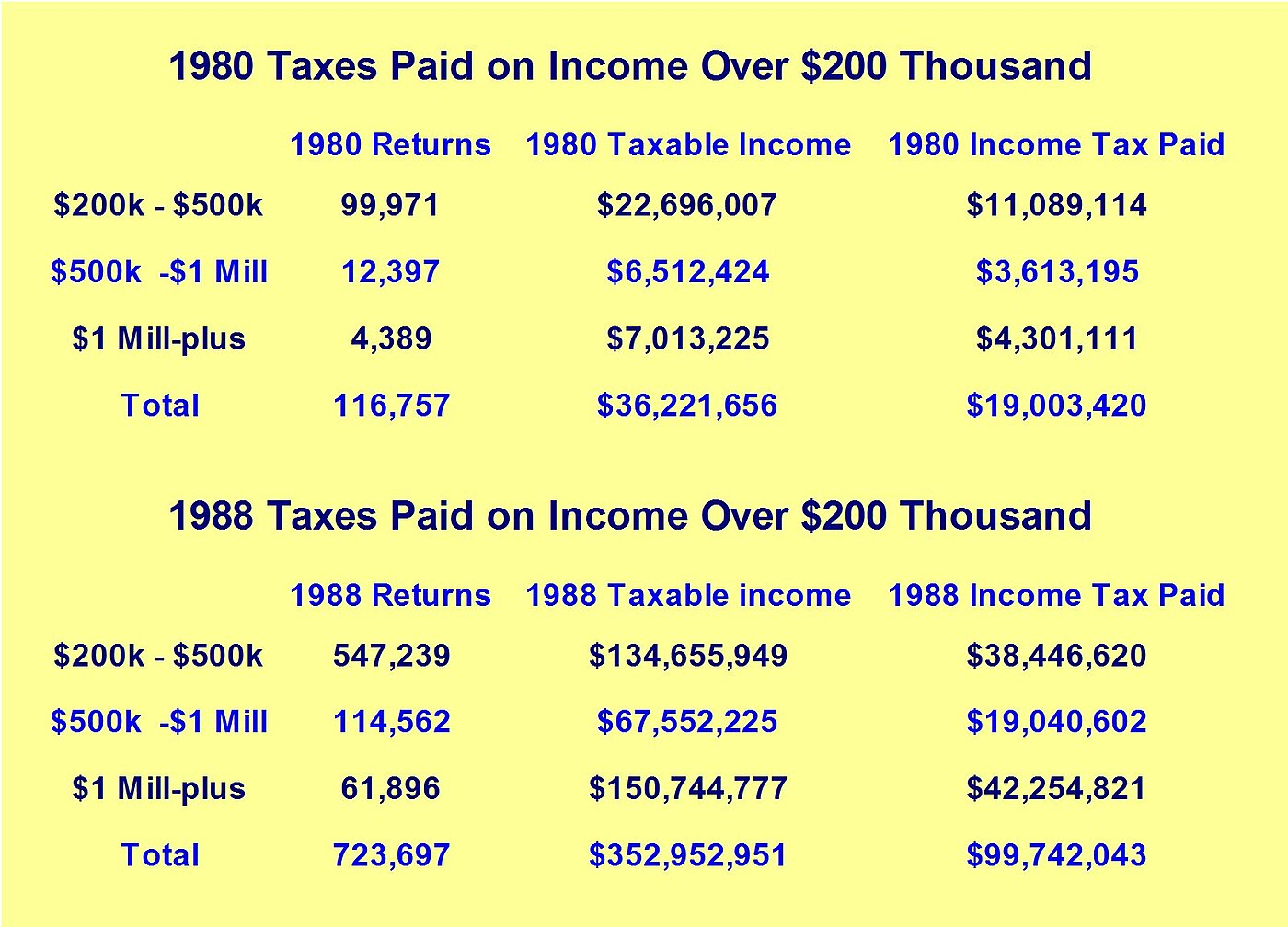 P.S. The strongest single piece of evidence for the Laffer Curve is what happened to tax collections from the rich in the 1980s. The top tax rate dropped from 70 percent to 28 percent, leading many statists to complain that the wealthy wouldn't pay enough and that the government would be starved of revenue. To put it mildly, they were wildly wrong.

I cite that example, as well as other pieces of evidence, in this video.

P.P.S. And it you want to understand specifically why class-warfare tax policy is so likely to fail, this post explains why it's a fool's game to target upper-income taxpayers since they have considerable control over the timing, level, and composition of their income.

P.P.P.S. Above all else, never forget that the goal should be to maximize growth rather than revenues. That's because we want small government. But even for those that don't want small government, you don't want to be near the revenue-maximizing point of the Laffer Curve since that implies significant economic damage per every dollar collected.