USA Today runs an interesting article about the DREAM Act, which Senate Republicans torpedoed this week, and which would have paved the way for many illegal immigrants to become legal.

As journalist Alan Gomez notes, the "less publicized part of the [DREAM Act] is that the Pentagon is pushing for it as a means to staff the armed forces."

When the Department of Defense published its three-year strategic plan, it listed the DREAM Act as a way it could replenish its ranks.

"If we needed to expand the pool of eligible youth, the (DREAM) initiative would be one of several ways to do it," spokeswoman Eileen Lainez said in an e-mail.

Retired Army lieutenant colonel Margaret Stock says a "crisis in military manpower" is looming as the population ages and the economy improves. She says the military struggled to recruit enough people when the economy was booming just a few years ago because people had more employment options.

"DREAM would give us the ability to tap into a huge number of people who grew up in the United States, were educated here, they talk like Americans, they look like Americans and their loyalty lies with America," says Stock, a former West Point professor who teaches political science at the University of Alaska-Anchorage.

The military part of the act worries Jorge Mariscal, director of Latino studies at the University of California-San Diego.

He says many illegal immigrant families are too poor to pay for college.

"Our concern is that people are just going to get trapped for economic reasons into the military," says Mariscal, who otherwise supports the DREAM Act.

A few thoughts on this: First, we might be experiencing a "crisis in military manpower" because we're fighting too many wars and trying to do too much abroad, rather than as a necessary consequence of our aging population.

Second, Mariscal's concern about illegal immigrants joining the military out of financial considerations rather than support for the nation's wars makes them...a lot like the people who are in the military already.  In a poll of active-duty military personnel published in the April 12, 2010 Defense News, responses to the question "What are the three most important reasons you would stay in the military?" were as follows: 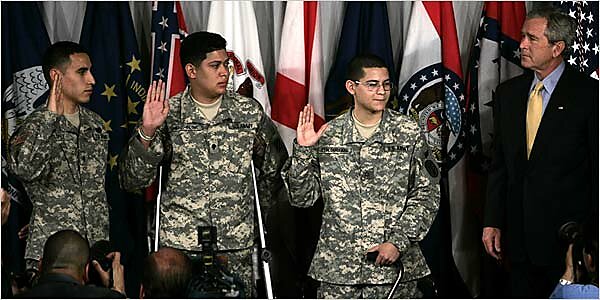 
Finally, those in Congress who support American militarism but oppose immigration have a few contradictions to reconcile.  The late Samuel Huntington, whose last book was searingly unpersuasive and draped a veneer of scholarly credibility over rank nativism, nonetheless got it right when he wrote that

[W]ars have furthered assimilation of immigrants not only by reducing their numbers but also by giving them the opportunity and the impetus to demonstrate their loyalty to America.  Readiness to fight and if necessary die in war cemented their attachment to their new home and made it difficult if not impossible for nativist, anti-immigrant groups to oppose their full membership in American society.

So if you're in any way interested in "assimilation," getting people into the military is one of the best ways to do it.

Further, when you have DOD pushing for a bill on the grounds that it provides for a future where the nation's armed forces can be fully staffed, and congressional war hawks spiking it because--well, for whatever variety of reasons they might have--it raises the question what the pro-war, anti-immgration folks' plan is for perpetuating American hegemony while keeping immigrants out of the armed forces.  Keeping unemployment at 10%?  Cranking up pay and benefits even faster, making the military budget even less sustainable?

Actually, one additional point: Mark Haas wrote an interesting article a few years back positing a "geriatric peace" on the grounds that large and powerful countries may age so fast that they may not have concentrations of young men (or women) needed to fight and die in war.  In that article, Haas wrote that

The United States is currently the youngest of all the Group of Eight nations.  Because it has the highest fertility and immigration rates of all these countries, it will maintain, even strengthen, this position in coming decades.

Both the opportunities and challenges for U.S. security in an aging world are substantial. The United States’ aging crisis is less acute than in the other great powers, and its ability to pay the costs associated with this phenomenon is significantly better than most of these states. These facts, however, should not disguise the magnitude of these costs for the United States nor lull U.S. leaders into inaction on this critical issue. The more the United States maintains its enviable demographic position (compared with the other great powers) and relatively superior ability to pay for  the costs of its elderly population, the more it will be able both to preserve its own position of international power dominance and to help other states address their aging (and other) problems when it is in U.S. interests to do so. A critical implication of these facts is that such domestic policies as means-testing Social Security and Medicare payments, raising the retirement age to reflect increases in life expectancies, maintaining  largely open immigration policies to help keep the United States’ median age relatively low, encouraging individual behaviors that result in better personal health, and perhaps above all restraining the rising costs of its health-care system are critical international security concerns.  A defining political question of the twenty-first century for U.S. international interests is whether U.S. leaders have sufficient political  will and wisdom to implement these and related policies. The more proactive U.S. leaders are in minimizing the scope of its aging population and the costs associated with it, the more protected U.S. international interests will be. To ignore these costs, or even to delay implementing various reforms designed to limit their size, will jeopardize the level of global influence and security that the United States enjoys today.