RealClearPolitics provides a useful tool to compare the Republican and Democratic nomination races today to similar points during the 2012 and 2008 primary cycles. Those nominating contests show that the candidates ahead at this point in the election cycle did not take home the nomination. This suggests that despite Donald Trump and Hillary Clinton’s persistent leads throughout the summer and fall of 2015, their primary victories remain uncertain.

Averaging across recent December polls, Donald Trump holds the lead among national Republican voters (not necessarily likely primary voters), at 35 percent. Trump holds a 15-point lead over Sen. Ted Cruz (R-TX) in second place at 19.5 percent and an over 20-point lead over Sen. Marco Rubio (R-FL) in third place with 11.5 percent. Trump’s support took-off in July and, for the most part, he's remained ahead and increased momentum. 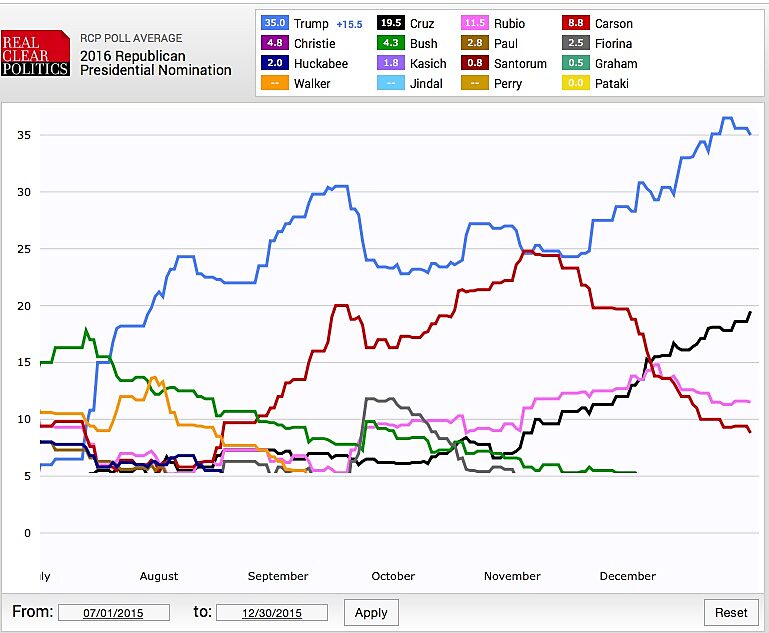 Does Trump’s lead entering into 2016 portend his eventual win? Not necessarily.

At this point in the 2008 primary election cycle, former New York City mayor Rudy Giuliani led the pack with 23.6 percent. Former Arkansas Governor Mike Huckabee garnered 16.8 percent in second place while the eventual GOP nominee Sen. John McCain (R-AZ) was in third with 13.6 percent. Like Trump, Giuliani consistently remained ahead throughout the summer and fall of 2007. 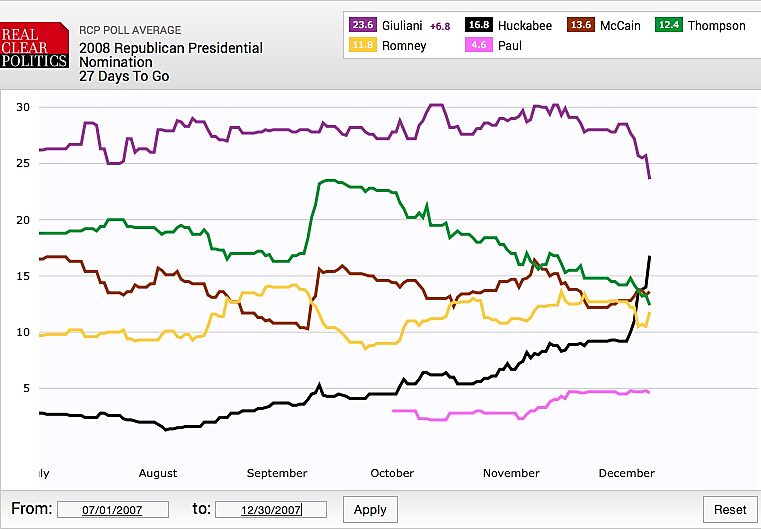 Similarly, in 2012, RCP shows that former House Speaker Newt Gingrich held the top slot at this point in the cycle with 31 percent, while the eventual nominee Mitt Romney was in second with 20.5 percent. Herman Cain was in third with 13 percent. 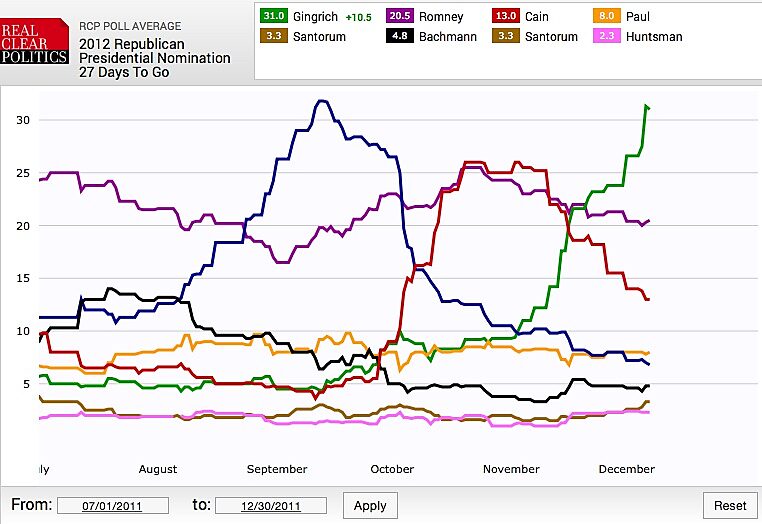 As for the Democrats, Secretary Clinton has maintained a solid polling lead throughout this cycle for the nomination. Averaging over the same period as the 2016 GOP candidates, Clinton garners an average of 53.8 percent of the Democratic vote. Trailing by over 20 points, Sen. Bernie Sanders (D-VT) averaged 31.2 percent in December and O’Malley came in a distant third at 4.6 percent. 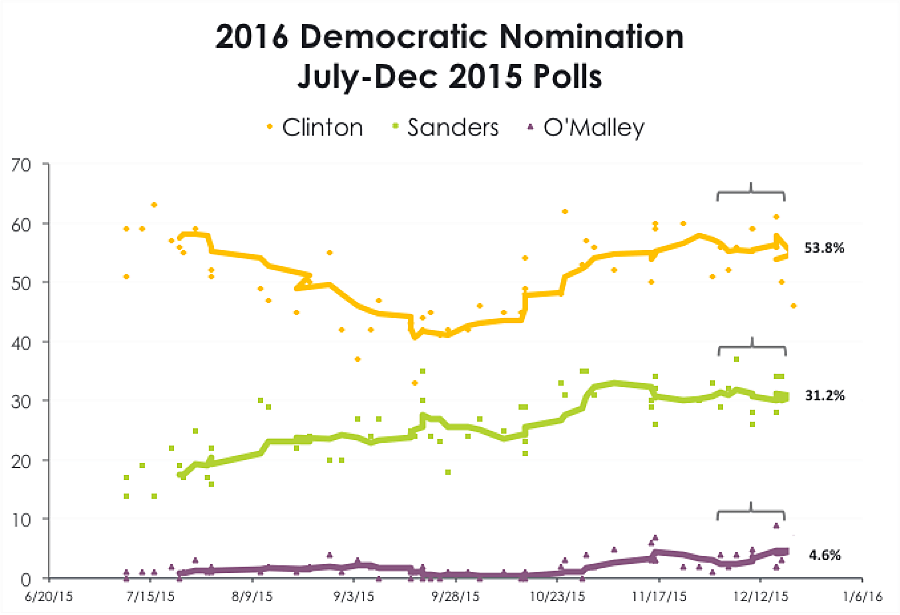 Hillary Clinton seems certain to clinch the nomination with little trouble, and she likely will. But it’s worth pointing out that Clinton found herself in a similar--albeit not identical--polling position heading into the January 2008 primary. As she did in this cycle, Clinton had held a persistent lead over her rivals throughout 2007,  Sens. Barack Obama and John Edwards. Analysts were all but certain she would be the party’s nominee. 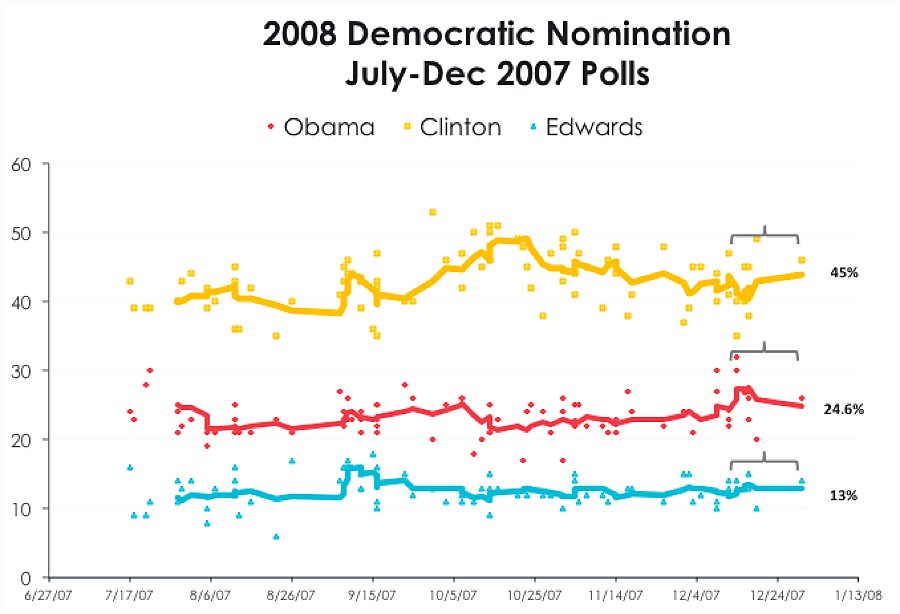 Average polling throughout December 2007 found Clinton with 45 percent of the Democratic vote. Barack Obama trailed by 20 points with 24.6 percent and John Edwards garnered 13 percent. Fast-forward a few weeks: Obama won the Iowa Caucuses and his numbers soared past Clinton, eventually securing the nomination. Similar to the Republicans in 2012, the eventual winner of the Democratic nomination was polling second at the start of the new year in 2008. 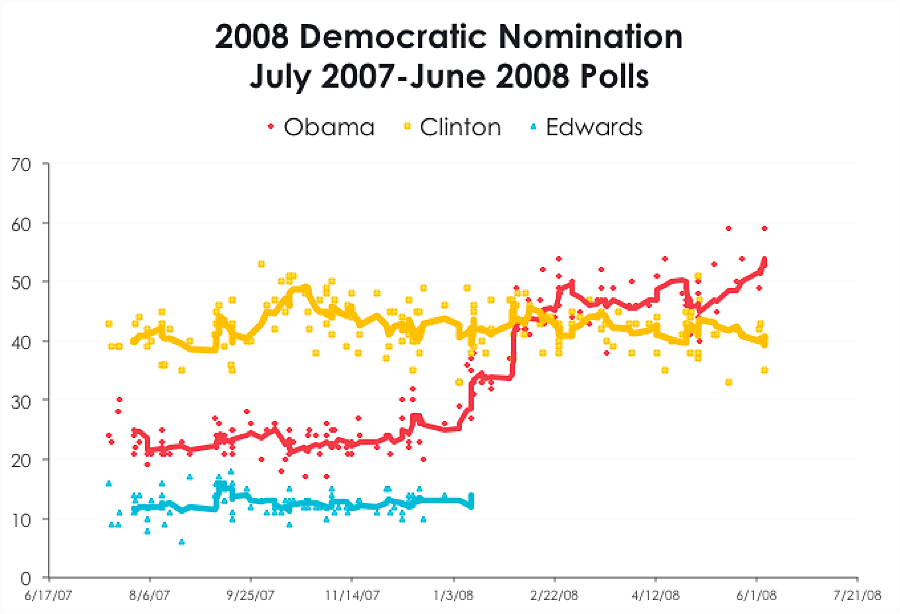 Even candidates consistently ahead in the polls entering into a presidential election year can still falter. Similar to Trump’s persistent lead throughout the fall of 2015, Giuliani and Clinton maintained a consistent lead throughout the summer and fall of 2007. They eventually lost to their third and second place rivals, respectively. Throughout the summer and fall of 2011, Mitt Romney trailed Texas Governor Rick Perry, former Godfather Pizza CEO Herman Cain, and Newt Gingrich.

Despite these similarities across the last three nominating seasons, there are important differences between the candidates and campaigns. First, Trump has attracted more enthusiastic support with (thus far) enduring momentum and has activated a new base of supporters who have traditionally not voted in Republican primaries. Giuliani did not attract the growing momentum that Trump has, but rather maintained a consistent lead in 2007. In 2012, Republican voters cycled throughout a number of different contenders before they settled on Romney.

Third, Hillary Clinton’s primary rival is Bernie Sanders, not Barack Obama. Polling of Sanders supporters reveals they comprise a much narrower demographic and ideological base than Obama’s coalition. Consequently, it’s difficult to conceive of a situation where Sanders wins an early primary and convinces enough strategic Clinton voters who actually prefer Sanders that he is, in fact, electable.

Fourth, Sanders has failed to make headway in terms of the “endorsement primary,” which research shows is highly predictive of successful candidates (see Cohen, et al 2008, The Party Decides). That said, Clinton led Obama in endorsements leading up to the Iowa Caucus in 2007, but by a smaller margin.

It’s anyone’s guess what could happen after the 2016 Iowa Caucuses and first few primaries. Nevertheless, based on 2008 and 2012 there is reason to expect changes in today’s polling lineup.