President Trump Is Breaking His Promise on Christian Refugees

According to figures from the U.S. Department of State, the United States accepted 3,671 Christian refugees per month from October 2015 to December 2016. President Trump assumed office on January 20, 2017 and issued his refugee executive order on January 27. The country accepted 1,280 Christian refugees per month from February to September 2017. In other words, the Obama administration was taking in almost three times as many refugees as the Trump administration has.

Figure 1 Monthly Christian Refugee Admissions, Monthly Average of 2016 and Each Month of 2017 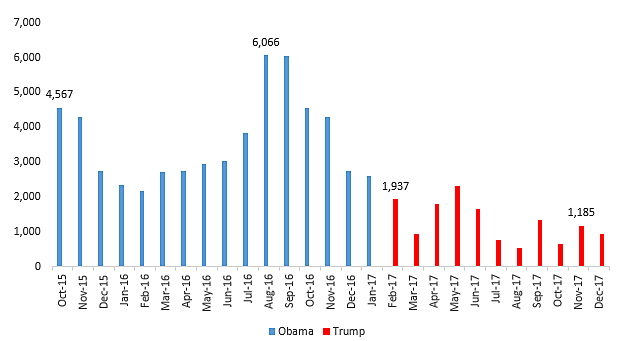 Over the last decade, the United States has averaged roughly twice as many Christian refugees per month as it is now accepting under the Trump administration. In other words, rather than rescuing more Christian refugees than prior presidents President Trump has halved their numbers. The numbers so far for Fiscal Year 2018, which started in October, are now below 1,000. 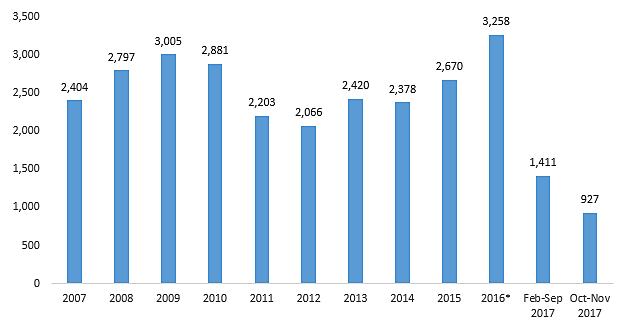 In this case, the so‐​called prioritization has increased the share of Christian refugees from a monthly average of 45 percent from October 2015 to January 2017 to 64 percent in November 2017, while dropping the absolute number. As I wrote last week, the share has increased at the expense of Muslim refugees whose numbers have dropped a staggering 94 percent over the course of this year.

President Trump is no longer a proponent of Christian refugee resettlement. I have previously detailed the administration’s efforts to deport Iraqi Christians, many of whom have lived in the United States for decades. A federal district court has temporarily paused their removals, accusing the Trump administration of impeding the refugees’ efforts to challenge their removals in courts and stating that they are “confronting a grisly fate … if deported to Iraq.”

The problem is that the administration’s views on all immigrants too easily extend to Christians for its policies to leave them unscathed. Foreign Christians could still “steal” jobs from Americans. They could end up using welfare. They could commit crimes in the United States. Ultimately, these objections to immigration generally generate the results that are clear to all: fewer immigrants of all types.