This is a serious question, so no jokes about the Nobel Prize he received for not being Bush. And no partisan GOP answers about the 2010 election, either.

Put yourself in the position of a future historian and think about what you would put in a book to describe Obama’s biggest accomplishment.

I don’t think anyone, regardless of ideology, would pick the so-called stimulus. Advocates of small government say it was a waste of money based ondeeply flawed Keynesian theory. 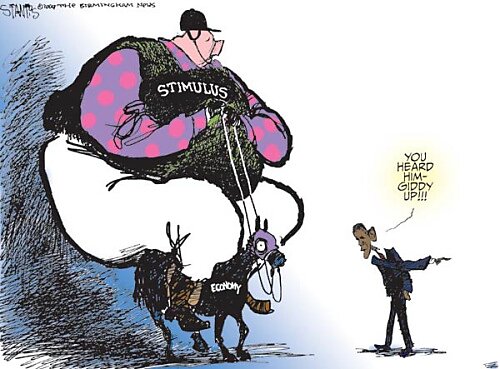 Proponents of big government, by contrast, also aren’t big fans of the stimulus, though they’re dissatisfied because they think Obama should have wasted even more money.

Another potential answer is Obamacare. Libertarians and conservatives, needless to say, would say it was a significant accomplishment in the same sense that the Titanic had a significant maiden voyage.

Leftists, by contrast, obviously can’t be pleased by the way Obamacare is imploding  in the short run, but they nonetheless may think that it will be worth it in the medium run because more people will be dependent on government (though they may regret their choice in the long run).

Killing Osama bin Laden is probably a good answer, but if terrorism and conflict with the Islamic world are still big issues in the future, then I suspect the achievements of Seal Team Six won’t be seen as making that much of a difference.

For what it’s worth, I think the change in public opinion may be the President’s most long-lasting and significant accomplishment. Take a look at these remarkable results just published by Gallup. A record share of the population now say that big government is the biggest threat to the nation’s future.

Wow. I’m tempted to say that this is strong evidence of the effectiveness of the Cato Institute (and there is independent data to support that position), but I feel compelled to admit that Obama also deserves a good bit of the credit.

Even more amazing, President Obama has done something that is probably beyond even the ability of Cato. He’s convinced partisan Democrats that big government is a serious threat. Look at how the numbers have dramatically changed since 2008.

What’s particularly amazing about the shift among Democrats isn’t that 56 percent now view big government as the major threat today, compared to 32 percent about five years ago. What’s shocking is that this change happened with a Democrat in the White House.

This is newsworthy because partisan Republicans and Democrats have a tendency to say things are good or bad depending on whether “their team” is in charge.

While these numbers are remarkable, I suppose it’s too early to say the growing concern about big government is the most significant accomplishment of the Obama presidency.

And if that happens, then the shift in public opinion during the Obama years may turn out to be profoundly important. In other words, Obama may turn out to be another Herbert Hoover – a politician whose statist policies set the stage for dramatic changes in public policy.

And if that happens, Obama truly will deserve to be named “libertarian of the year.”

P.S. While big government is the biggest threat to the country’s future, big business and big labor can be very dangerous to liberty when they get in bed with big government.