President‐​elect Donald Trump. That’s a phrase I never expected to see. Like most Washingtonians, journalists, and political observers around the country, I never took his candidacy seriously. And now here we are, in thoroughly uncharted waters. I don’t think we’ve ever had a president with less apparent knowledge of or interest in policy, which makes it difficult to assess the direction of policy over the next few years. The few issues that did seem to motivate Trump were strikingly unattractive from a libertarian perspective, notably his hostility to international trade and immigration.


Back in January I wrote this in a National Review symposium:

From a libertarian point of view—and I think serious conservatives and liberals would share this view—Trump’s greatest offenses against American tradition and our founding principles are his nativism and his promise of one‐​man rule.


Not since George Wallace has there been a presidential candidate who made racial and religious scapegoating so central to his campaign. Trump launched his campaign talking about Mexican rapists and has gone on to rant about mass deportation, bans on Muslim immigration, shutting down mosques, and building a wall around America. America is an exceptional nation in large part because we’ve aspired to rise above such prejudices and guarantee life, liberty, and the pursuit of happiness to everyone. Equally troubling is his idea of the presidency—his promise that he’s the guy, the man on a white horse, who can ride into Washington, fire the stupid people, hire the best people, and fix everything. He doesn’t talk about policy or working with Congress. He’s effectively vowing to be an American Mussolini, concentrating power in the Trump White House and governing by fiat. It’s a vision to make the last 16 years of executive abuse of power seem modest.

Nothing much changed over the ensuing 10 months. Except that Trump won the election. He is now president‐​elect, and scholars and activists on all sides are waiting to see what his actual policies will be. Some of my friends are excited about the prospects for tax cuts, deregulation, repeal of Obamacare, the appointment of conservative or classical liberal Supreme Court justices, and a change in our interventionist foreign policy. Others—and sometimes the same people—worry about threats to world trade and an open society, religious tests, and a president who seems vindictive, inclined to conflate his private business with public affairs, and predisposed toward an authoritarian mindset.

I worry that Americans across the political spectrum are fulfilling one of Hayek’s warnings in The Road to Serfdom:

We must here return for a moment to the position which precedes the suppression of democratic processes and the creation of a totalitarian regime. In this stage it is the general demand for quick and determined central government action that is the dominating element in the situation, dissatisfaction with the slow and cumbersome course of democratic processes which make action for action’s sake the goal. It is then the man or the party who seems strong and resolute enough to ‘get things done’ who exercises the greatest appeal.

Clearly that was part of Trump’s appeal: “I alone can fix it.” But President Obama made the same point when he said, “We can’t wait for Congress to do its job, so where they won’t act, I will.” Hillary Clinton made the same promise to her supporters.


President Obama, like President George W. Bush before him, built up the power of the presidency and the potential for abuse. Now he is handing that powerful presidency to a man he declared unfit to hold such power. Libertarians, liberals, and constitutional conservatives need to come together to rein in the powers of the executive and restore Congress as the constitutionally designated legislative body. Some conservatives understand that. Here’s Michael Gerson in the Washington Post:

In Federalist No. 10, James Madison says that we can’t always assume the existence of “enlightened statesmen.” And, by golly, he got that one right. The Constitution is designed to channel and balance conflicting interests, making the whole system less vulnerable to a bad leader. The founders might have been appalled by the election of a Trump‐​like president; they would not have been surprised by it.…


Republicans will genuinely agree on parts of Trump’s agenda. But the republic is likely to depend, at certain defining moments, on stubborn Republican institutionalists willing to defy the wrath of populists. Democrats may find this unlikely. It is incumbent on GOP leaders to prove them wrong.

George Will also sought hope in the principles the Republican party proclaims:

For constitutional conservatives, the challenge is exactly what it would have been had Clinton won: to strengthen the rule of law by restoring institutional equilibrium. This requires a Republican Congress to claw back from a Republican executive the legislative powers that Congress has ceded to the administrative state, and to overreaching executives such as Obama, whose executive unilateralism the president‐​elect admires.

We also need to make clear that America’s founding principles of liberty, limited government, and equality under the rule of law apply to all Americans. Many conservatives and libertarians had a good time mocking the “special snowflakes” on elite college campuses who were so traumatized by Trump’s election that they needed exams canceled and therapy dogs brought in. They’re an easy target—smart, affluent students in the best colleges in the richest country in the history of the world unable to handle losing an election. But as Radley Balko said on Twitter, imagine being a Latino student when the president‐​elect has promised to deport 11 million Latinos. Or a Muslim student worried that the next president views you as a terrorist. Or a black student who fears that the police are going to read the president and his attorney general as indifferent to police abuse. Republicans say they don’t want to appeal to people as racial blocs, they want to implement policies that benefit all Americans. Then they might take a leaf from Hillary Clinton’s concession speech:

Let’s do all we can to keep advancing the causes and values we all hold dear.…

And breaking down all the barriers that hold any American back from achieving their dreams. We spent a year and a half bringing together millions of people from every corner of our country to say with one voice that we believe that the American dream is big enough for everyone.

For people of all races, and religions, for men and women, for immigrants, for LGBT people, and people with disabilities. For everyone.

Libertarians believe that. I hope that conservatives and Republicans and even President‐​elect Trump will say—and demonstrate—that they believe it, too. 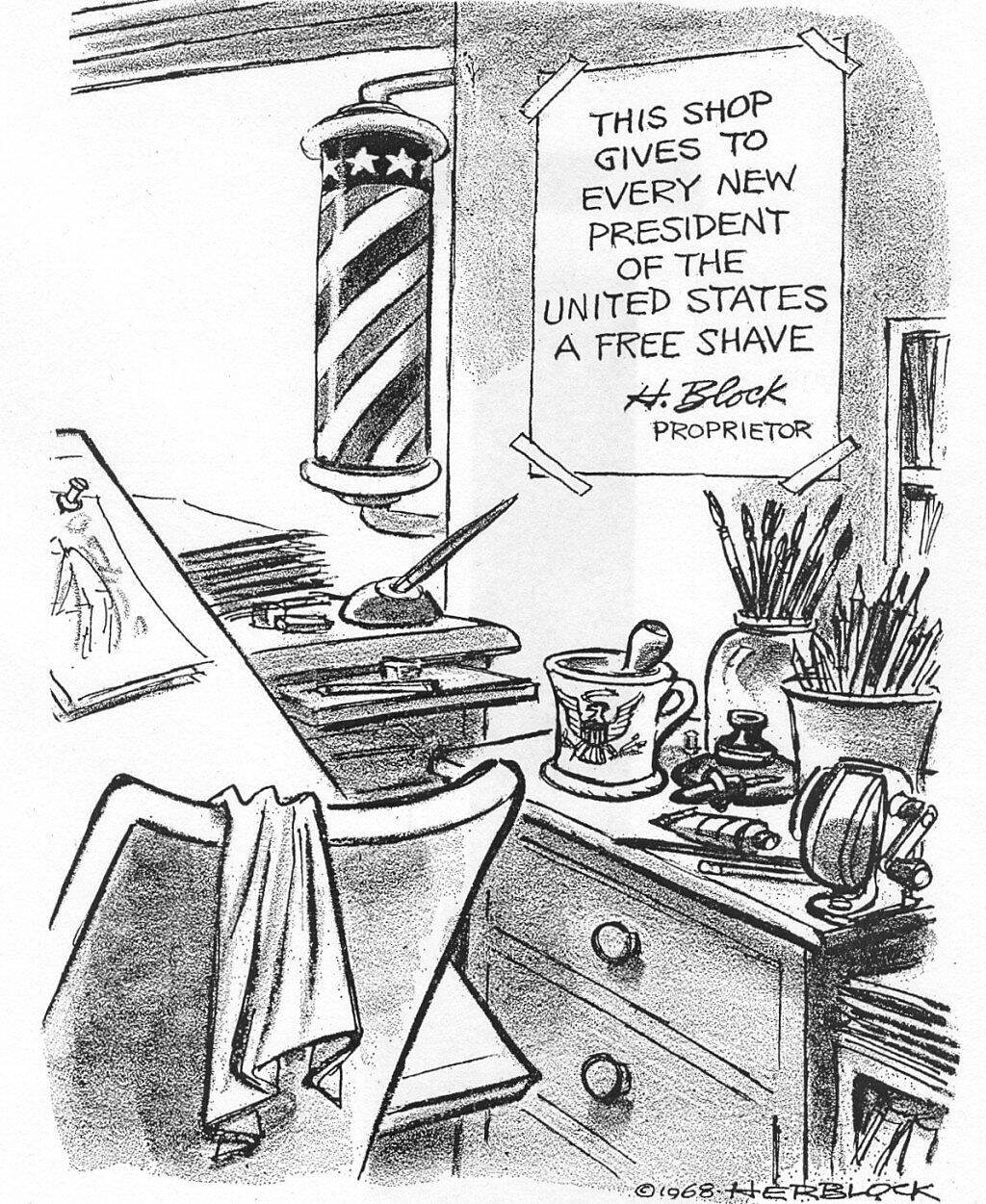 Whatever the misgivings I had about candidate Trump—and candidate Clinton—the election is over. Donald Trump will be the next president. Like all Americans, my colleagues and I will deal with that. I hope that when Trump puts his hand on the Bible and recites George Washington’s oath of office, he will indeed be inspired to put campaign rhetoric behind him and to preserve, protect and defend the Constitution of the United States. In 1968 the Washington Post columnist Herblock, who had savaged Richard Nixon for two decades, usually drawing him with a sinister 5 o’clock shadow, drew a cartoon depicting his office as a barbershop and wrote, “This shop gives to every new president of the United States a free shave.”


In January we will publish the 8th edition of the Cato Handbook for Policymakers, a collection of 80 chapters of policy advice ranging from tax reform and health care to foreign policy and congressional governance. We trust that members of both parties in Congress and the administration will be seeking to implement policies that will enhance the liberty, security, and prosperity of the American people, and that they will thus take an interest in our recommendations. And we will also remember that eternal vigilance is the price of liberty.