Pope Francis Graph of the Day

As the Argentine Pope, ever critical of capitalism, visits the United States, my colleagues at Human​Progress​.org have posted this graph. 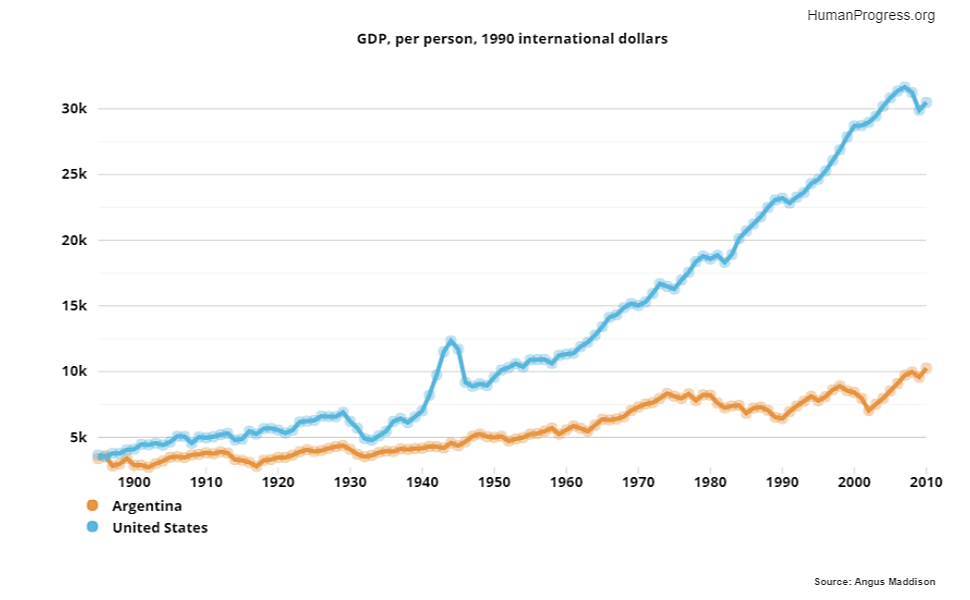 It shows that in 1896, income per person in the United States and Argentina, two of the richest countries in the world, was about identical. Argentina subsequently eschewed the free market, replacing it with trade protectionism and other corporatist policies intended to help the poor by redistributing wealth. By 2010, Argentine income was a third of that of the United States.


Perhaps Pope Francis doesn’t endorse Argentine economic policies, but having just arrived from Cuba, he missed an opportunity to denounce the lack of freedoms that have kept that island and other Latin American countries poor and repressed. He met with none of the many admirable Cuban dissidents, in or out of prison, who have been peacefully advocating basic rights. Nor did he mention the plight of the Cuban people they represent, even as authorities arrested or detained 250 Cuban activists during his visit.


The Cuban Forum for Rights and Liberties (Foro por los Derechos y Libertades), an independent group of dissidents in Cuba, summed up how it felt about, and experienced, the Pope’s visit. It read, in part:

“We human rights activists, regime opponents and independent journalists have experienced days full of threats, harassment, telephone connections being cut off, homes besieged by the authorities, and violent, arbitrary arrests.


The behavior of the regime was expected. However, the position of the church has been surprising. The exaggerated and repeated shows of approval of the dictatorship, the silence toward its excesses, and the refusal to hear dissident voices have created broad discontent among Cuban believers and non‐​believers both within and outside of the island.”

The group might have added that the disappointment has spread more widely in the Americas.