There’s a “convergence” theory in economics that suggests, over time, that “poor nations should catch up with rich nations.”

But in the real world, that seems to be the exception rather than the rule.

There’s an interesting and informative article at the St. Louis Federal Reserve Bank which explores this theory. It asks why most low-income and middle-income nations are not “converging” with countries from the developed world.

…only a few countries have been able to catch up with the high per capita income levels of the developed world and stay there. By American living standards (as representative of the developed world), most developing countries since 1960 have remained or been “trapped” at a constant low-income level relative to the U.S. This “low- or middle-income trap” phenomenon raises concern about the validity of the neoclassical growth theory, which predicts global economic convergence. Specifically, the Solow growth model suggests that income levels in poor economies will grow relatively faster than developed nations and eventually converge or catch up to these economies through capital accumulation… But, with just a few exceptions, that is not happening.

Here’s a chart showing examples of nations that are – and aren’t – converging with the United States. 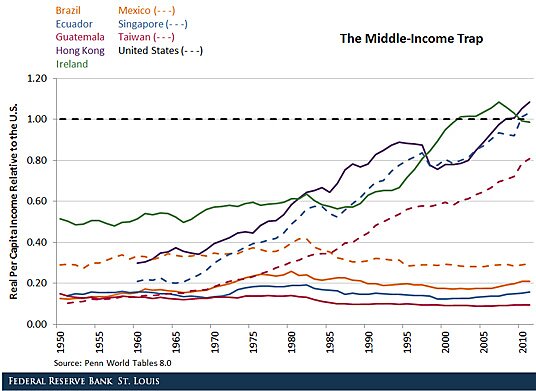 The authors analyze this data.

The figure above shows the rapid and persistent relative income growth (convergence) seen in Hong Kong, Singapore, Taiwan and Ireland beginning in the late 1960s all through the early 2000s to catch up or converge to the higher level of per capita income in the U.S. …In sharp contrast, per capita income relative to the U.S. remained constant and stagnant at 10 percent to 30 percent of U.S. income in the group of Latin American countries, which remained stuck in the middle-income trap and showed no sign of convergence to higher income levels… The lack of convergence is even more striking among low-income countries. Countries such as Bangladesh, El Salvador, Mozambique and Niger are stuck in a poverty trap, where their relative per capita income is constant and stagnant at or below 5 percent of the U.S. level.

The article concludes by asking why some nations converge and others don’t.

Why do some countries remain stagnant in relative income levels while some others are able to continue growing faster than the frontier nations to achieve convergence? Is it caused by institutions, geographic locations or smart industrial policies?

I’ll offer my answer to this question, though it doesn’t require any special insight.

Simply stated, Solow’s Growth Theory is correct, but needs to be augmented. Yes, nations should converge, but that won’t happen unless they have similar economic policies.

And if relatively poor nations want to converge in the right direction, that means they should liberalize their economies by shrinking government and reducing intervention.

Take a second look at the above chart above and ask whether there’s a commonality for the jurisdictions that are converging with the United States?

Why have Hong Kong, Singapore, Taiwan, and Ireland converged, while nations such as Mexico and Brazil remained flat?

The obvious answer is that the former group of jurisdictions have pursued, at least to some extent, pro-market policies.

Heck, they all rank among the world’s top-18 nations for economic freedom. 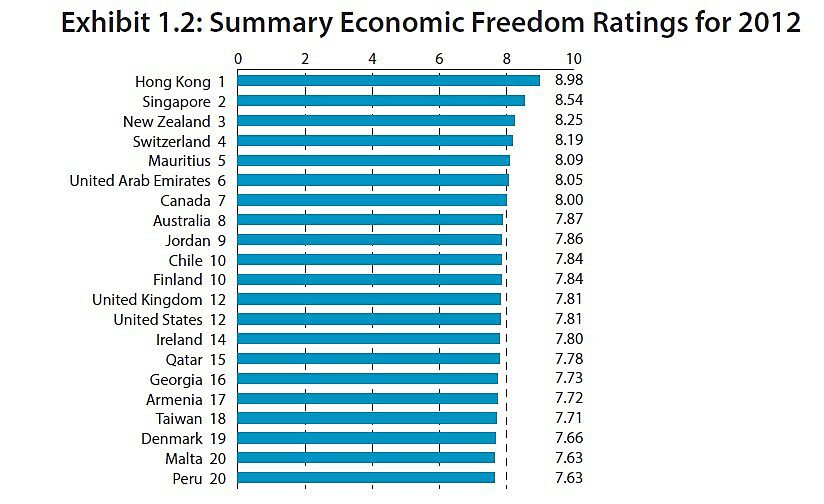 Hong Kong and Singapore have been role models for economic liberty for several decades, so it’s no surprise that their living standards have enjoyed the most impressive increase.

The moral of the story is – or at least should be – very clear: free markets and small government are the route to convergence.