Polling wizard Nate Silver of the New York Times today points to a couple of poll questions that David Kirby and I have often employed and finds some welcome new results, along with a great graph:

Since 1993, CNN has regularly asked a pair of questions that touch on libertarian views of the economy and society:

A libertarian, someone who believes that the government is best when it governs least, would typically choose the first view in the first question and the second view in the second.

In the polls, the responses to both questions had been fairly steady for many years. The economic question has showed little long-term trend, although tolerance for governmental intervention rose following the terror attacks of Sept. 11, 2001. The social libertarian viewpoint — that government should not favor any particular set of values — has gained a couple of percentage points since the 1990s but not more than that.

And then he offers this graph: 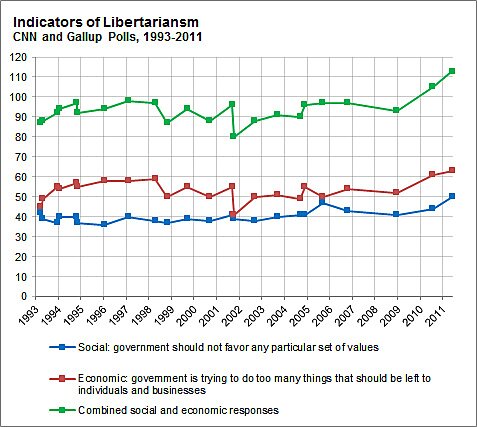