Poll: Americans Would Rather Pay Lower Prices than Purchase Items Made in the U.S. 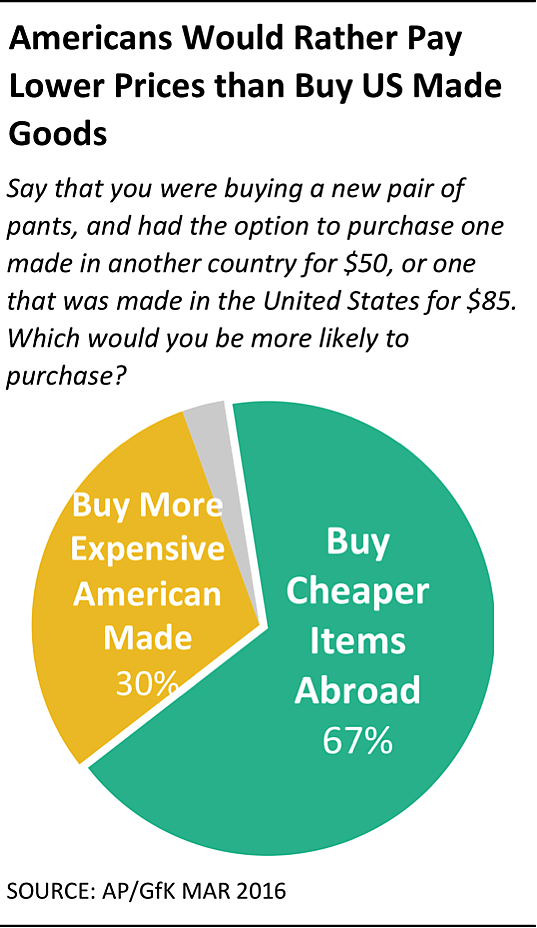 “We don’t win anymore!” Republican presidential candidate Donald Trump tells us. One of the main reasons, according to Trump, is due to free trade agreements. At a rally in North Carolina he declared: “All this free trade, you know what, it is free trade for them, not for us. We’re losing our shirts.” Trump has proposed imposing various taxes on foreign imports to the US because he believes this will help facilitate bringing back jobs to the US (my colleague Daniel Ikenson has written about this here and here).


Trump’s talk of unfair trade and his proposals to punish importers has resonated with many Americans. In fact, a recent CBS/​New York Times survey finds that 61% of Americans agree that “trade restrictions are necessary to protect domestic industries” whereas 29% say free trade should be allowed even if domestic industries are hurt by competition abroad.


Yet, Americans may not be willing to foot the bill of goods’ higher prices that will result from Trump’s proposed trade restrictions. A recent AP/​GfK poll finds that 67% of Americans would rather buy cheaper products made in another country rather than pay more for the same product made in the United States. Thirty percent (30%) say they’d rather pay more to buy American made products. That being said, 71% report that they’d like to buy American made items, but that they are often too costly or difficult to find. Furthermore, only 9% say they hold firm to only buying American made goods even if they cost more.


These poll results give some insight into Americans’ revealed preferences, or their actual consumer behavior. While in theory Americans like the idea of buying items made closer to home by their fellow citizens, ultimately their pocketbook may prove more relevant to their behavior.


Overall, Americans are quite divided over the general benefits of free trade with a third who believe free trade agreements are good for the economy, 37% who say they don’t make a difference, and about a quarter who think these agreements harm the economy.