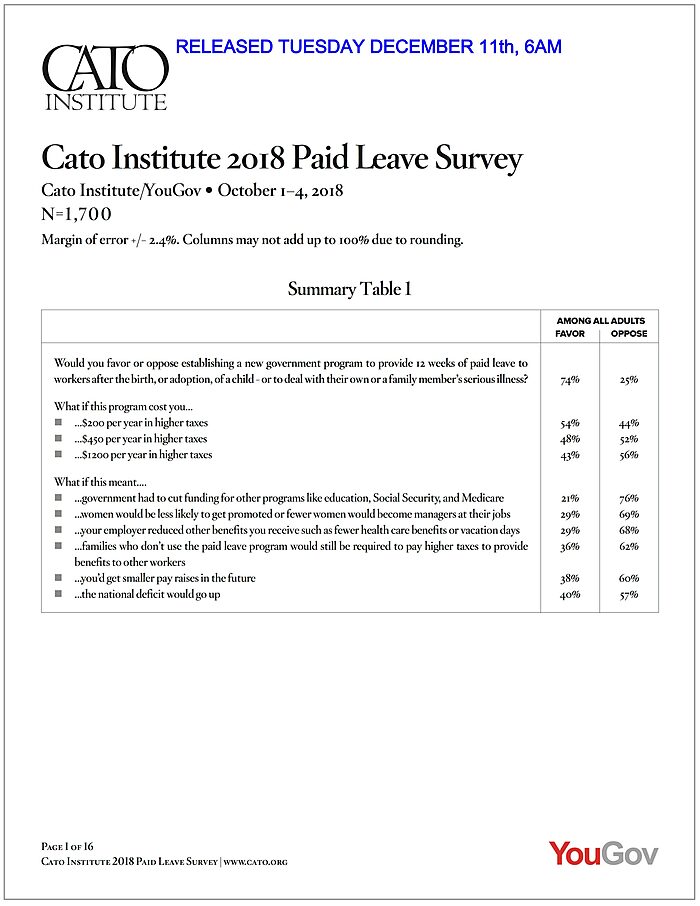 The Cato 2018 Paid Leave Survey, a new national poll of 1,700 U.S. adults, finds that nearly three-fourths (74%) of Americans support a new federal government program to provide 12 weeks of paid leave to new parents or to people to deal with their own or a family member’s serious illness. A quarter (25%) oppose establishing a federal paid leave program. However, support slips and consensus fractures when costs are considered. 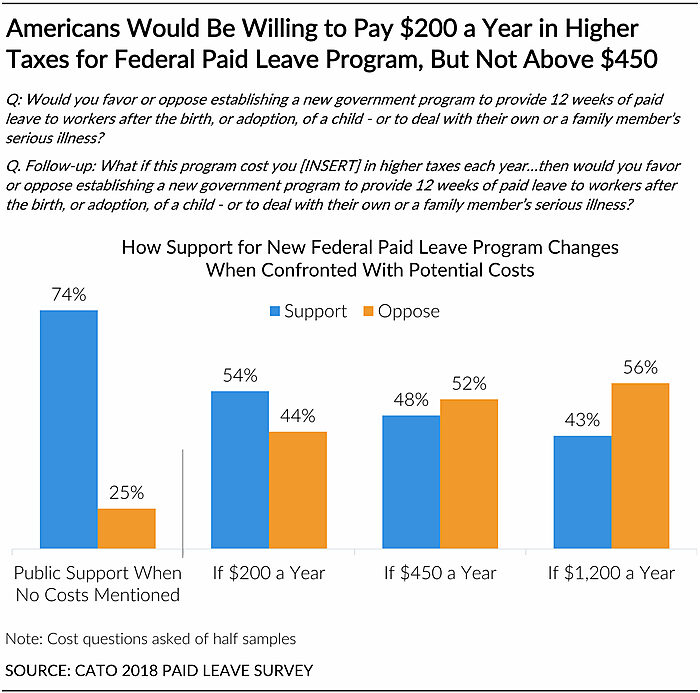 The survey found 54% of Americans would be willing to pay $200 a year in higher taxes, a low-end estimate, in exchange for a 12-week federal paid leave program. If the program were to cost them $450 in taxes a year—the mid-range estimate—52% of Americans would oppose it, while 56% would oppose if it cost them the high range estimate of $1,200 in taxes. (Low, mid, and high range cost estimates are based off of potential costs of the Family and Medical Insurance Leave Act (FAMILY Act). See here for further explanation of cost estimates).

What Trade-Offs Would Americans Make for Federal Paid Leave? 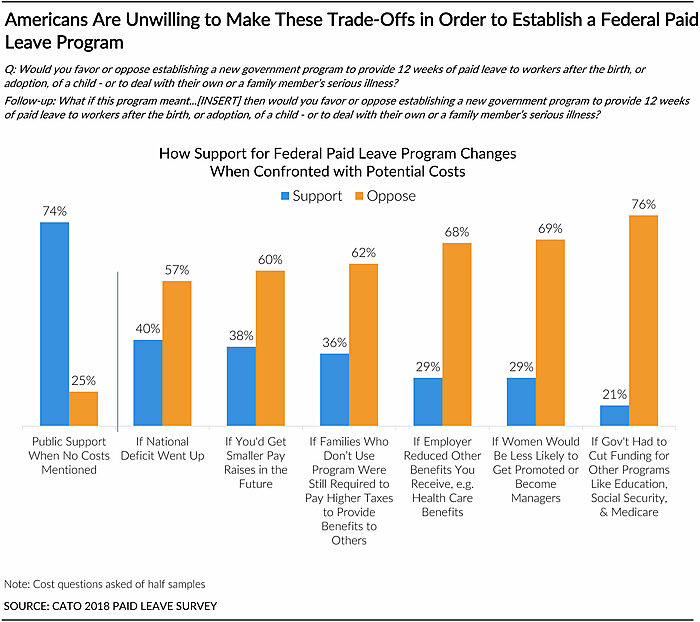 Partisan Consensus on Paid Leave Breaks Down When Costs Considered

At first, majorities of Democrats (88%), Republicans (60%), and independents (71%) all support establishing a new government program to provide 12 weeks of paid family or parental leave. However, consensus breaks down once the costs and trade-offs of the program are considered.

Democrats turn against a federal paid leave program for the following reasons: if it meant they’d receive smaller pay raises in the future with 49% in favor and 49% opposed; if the program caused fewer women to get promoted and become managers (63% opposed); if it meant employers would reduce benefits workers receive like health care benefits and vacation days (63% opposed); or if government spending on Social Security, Medicare, or other programs had to be cut (74% opposed). However, Democrats say they’d be willing to pay higher taxes, as high as $1,200 per year to establish the program, with 60% in favor. In contrast, Republicans turn against federal paid leave if it costs them $200 a year or more, with 63% opposed. Independents are split on raising their taxes $200 a year but turn against the program if it cost them $450 or more a year, with 56% opposed. 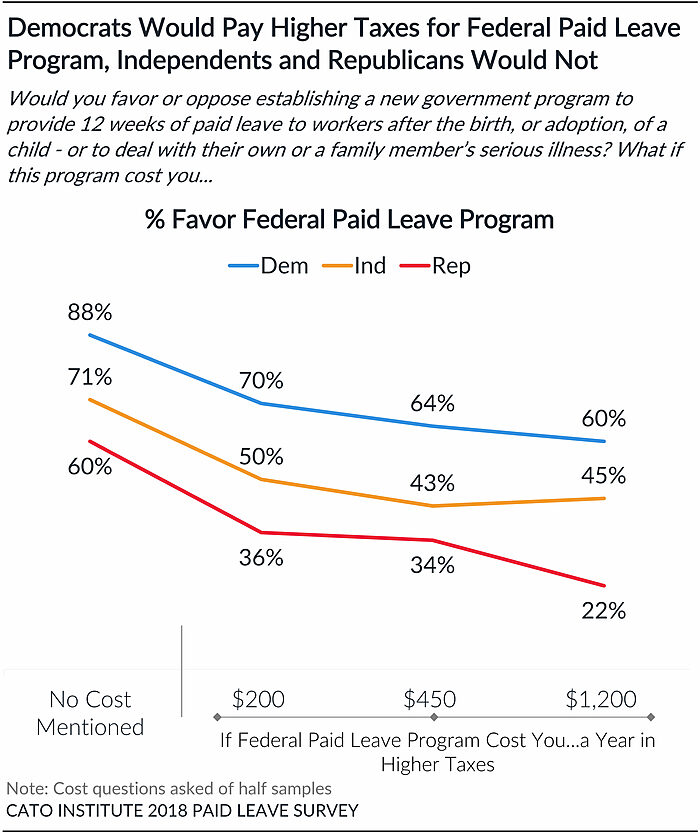 Nearly two-thirds (63%) of new mothers say that more affordable daycare (24%), more flexible work schedules (22%), and the ability to work remotely (17%) are more important than more paid parental leave (12%) to help them balance work and family. New mothers also report that the ability to work part-time hours (10%) and have extended afterhours childcare (10%) would best help them balance work and family obligations. The survey included an oversample of mothers of children under the age of 3 to enhance precision of these results. Parents of children under 18 also prioritize more flexible work schedules (26%), ability to work remotely (23%), and more affordable childcare (20%) ahead of more paid parental leave (10%). 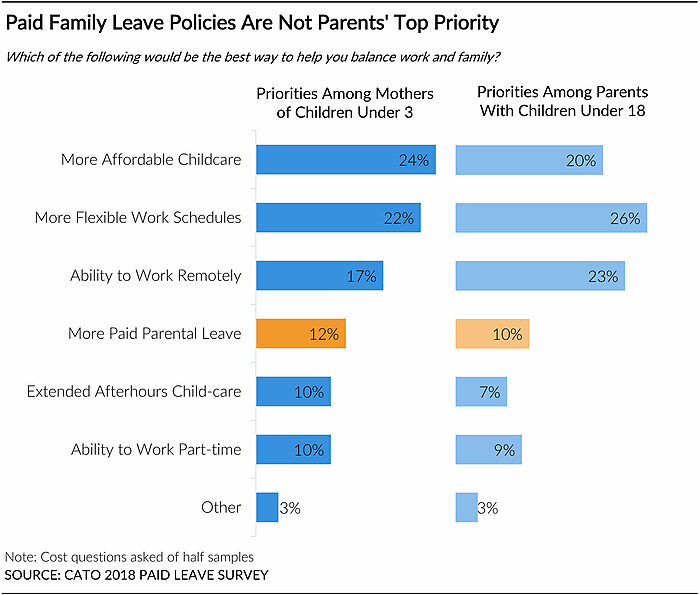 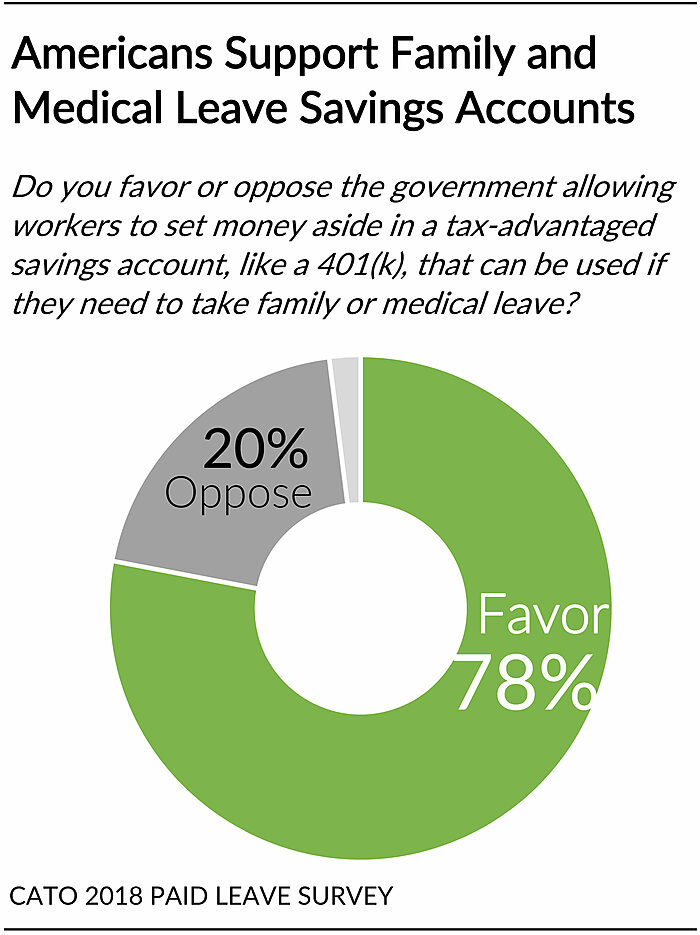 More than three-fourths (78%) of Americans support cultivating a culture of saving for parental and family leave through establishing a new tax-advantaged saving account for family and medical leave. Twenty percent (20%) oppose this proposal. Establishing family and medical leave savings accounts enjoys rare bipartisan support with majorities of Democrats (82%), Republicans (80%), and independents (69%) in support of offering tax advantages to people who set aside money for this purpose.

The survey also measured how many Americans might use a federal paid leave program and how many weeks they might use, if it were available to them. The survey found that 24.8% of current workers said they wanted or needed to take leave in the past 1 year, after the birth or adoption of a child, to care for an ill family member, or to deal with their own serious medical condition. If Americans were offered 66% of their current pay, but not more than $1000 per week, they say they would have taken the following:

These data show that while people overwhelmingly support the general idea of more paid leave, they aren’t willing to accept most of the costs necessary with establishing a new federal government program for this purpose. You can learn more about how women and men think differently about federal paid leave and its costs along with other findings from the survey here.

Read about the full survey results and analysis here.

The Cato Institute 2018 Paid Leave survey was designed and conducted by the Cato Institute in collaboration with YouGov. YouGov collected responses online during October 1-4, 2018 from a national sample of 1,700 Americans 18 years of age and older. Restrictions are put in place to ensure that only the people selected and contacted by YouGov are allowed to participate. The margin of error for the survey is +/- 2.4 percentage points at the 95% level of confidence.