Poll: 72% of Americans Say Immigrants Come to the United States for Jobs and to Improve Their Lives 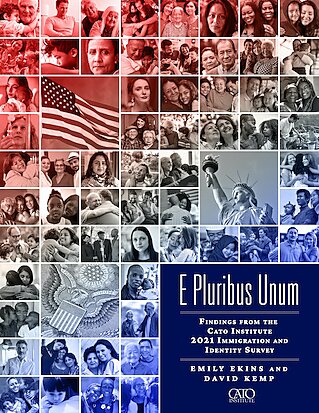 The Cato Institute 2021 Immigration and Identity National Survey, a new national survey of 2,600 U.S. adults, finds that nearly three‐​fourths (72%) of Americans believe immigrants come to the United States to “find jobs and improve their lives” while 27% think immigrants come to obtain government services and welfare.

Support for More Immigration Is on the Rise

Support for more immigration has tripled from the mid‐​1990s when about 10% of the public supported more immigration and two‐​thirds wanted less. Today 29% of Americans want more, 38% want to maintain current levels, and 33% want less. 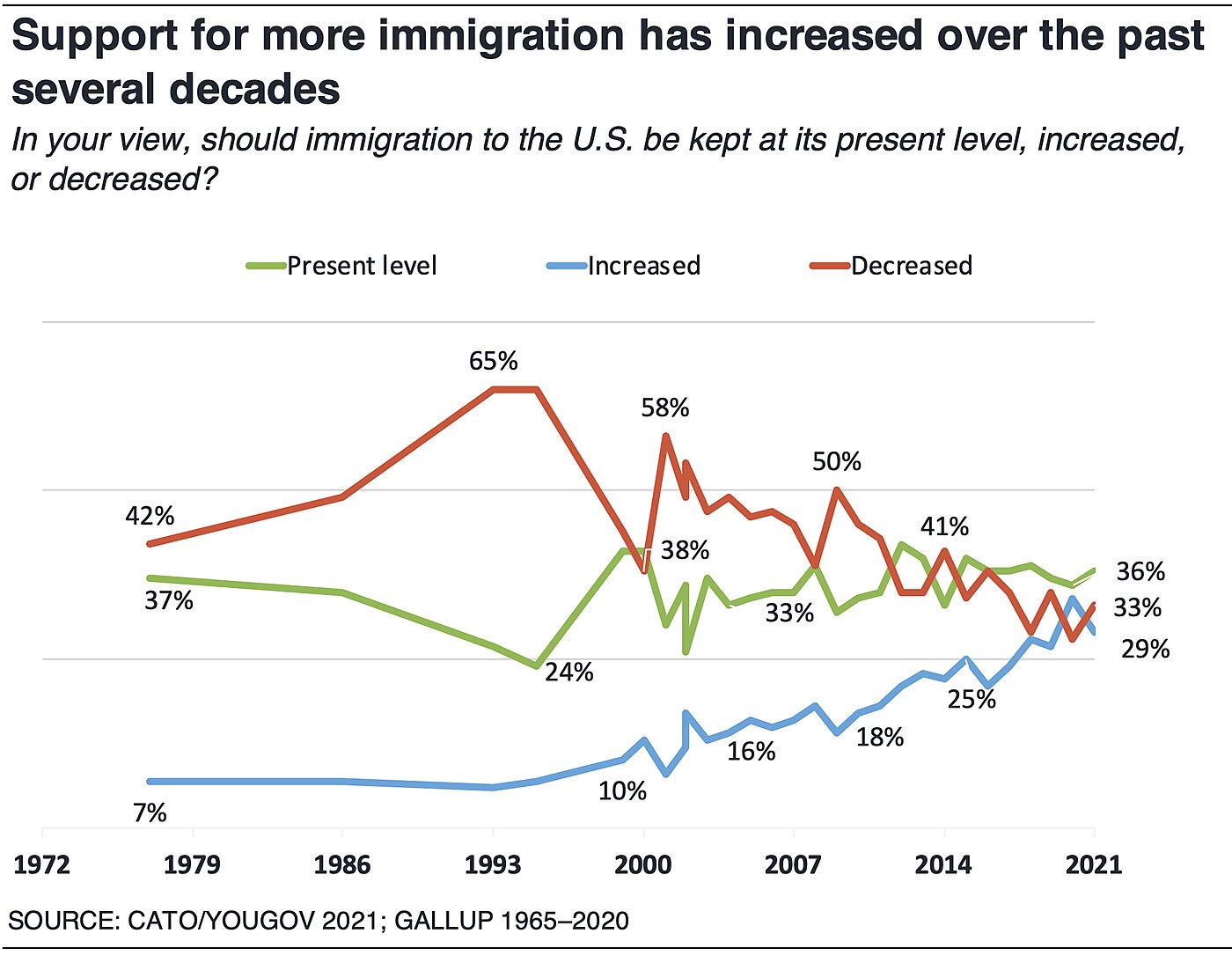 Democrats’ views largely account for this shift. Starting around 2008–2010, Democratic support for more immigration rose from about 20% to 47% today. 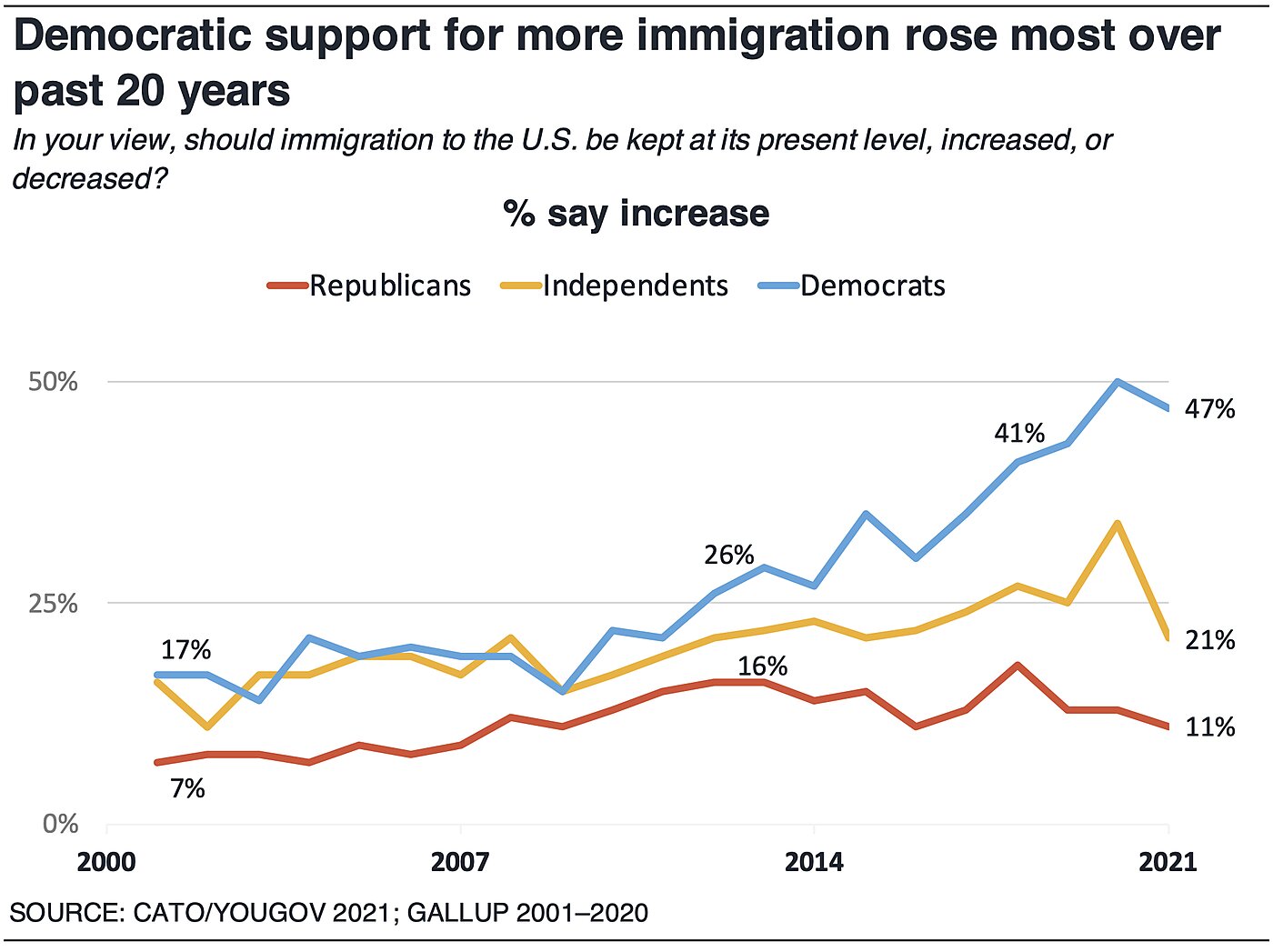 Seventy percent (70%) of Democrats say racist beliefs drive the desire for less immigration. In contrast 57% of all Americans, as well as 60% of independents and 88% of Republicans say a sincere interest in controlling the country’s borders is the reason.

91% of Americans Welcome Immigration to the U.S., 9% Want to Shut Down the Border 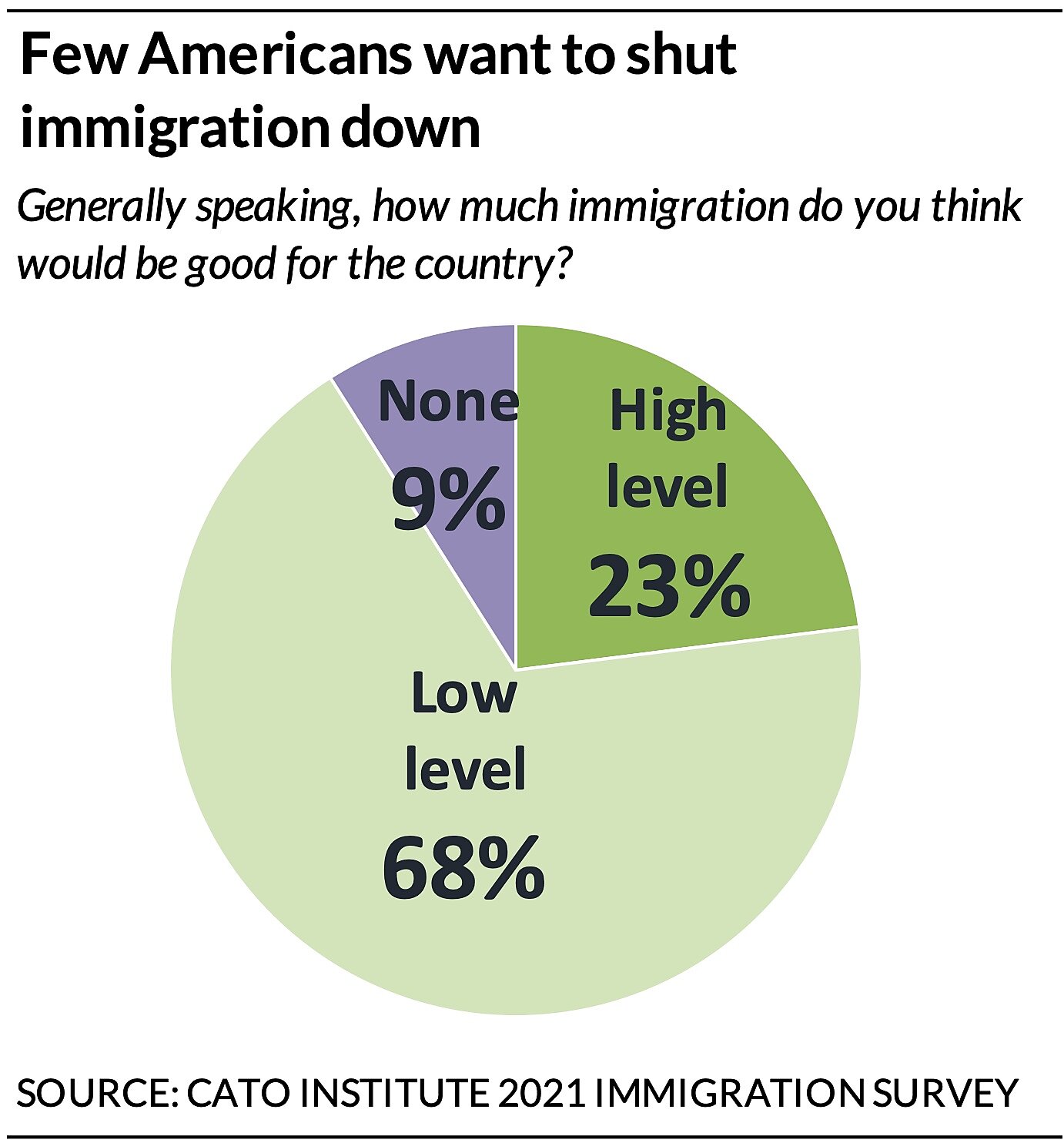 Only 9% of Americans want zero immigration into the United States today. Instead, 91% welcome immigration, including 68% who favor a “low level” and 23% who prefer a “high level” of immigration.

53% of Americans believe that the “ability to immigrate to a new country is a human right for all people.” Democrats (72%) and libertarians (55%) are more likely than independents (45%) and Republicans (33%) to agree. At the same time, only 33% of the public favors removing “all restrictions on immigration” after the pandemic is over. Strong liberals stand out with 72% who favor open borders, while 54% of moderate liberals and 82% of conservatives oppose.

67% of Americans Believe the Legal Immigration Process Is “Fairly Difficult”

More than two‐​thirds (67%) think that the American immigration process is “fairly difficult” and support a number of reforms: 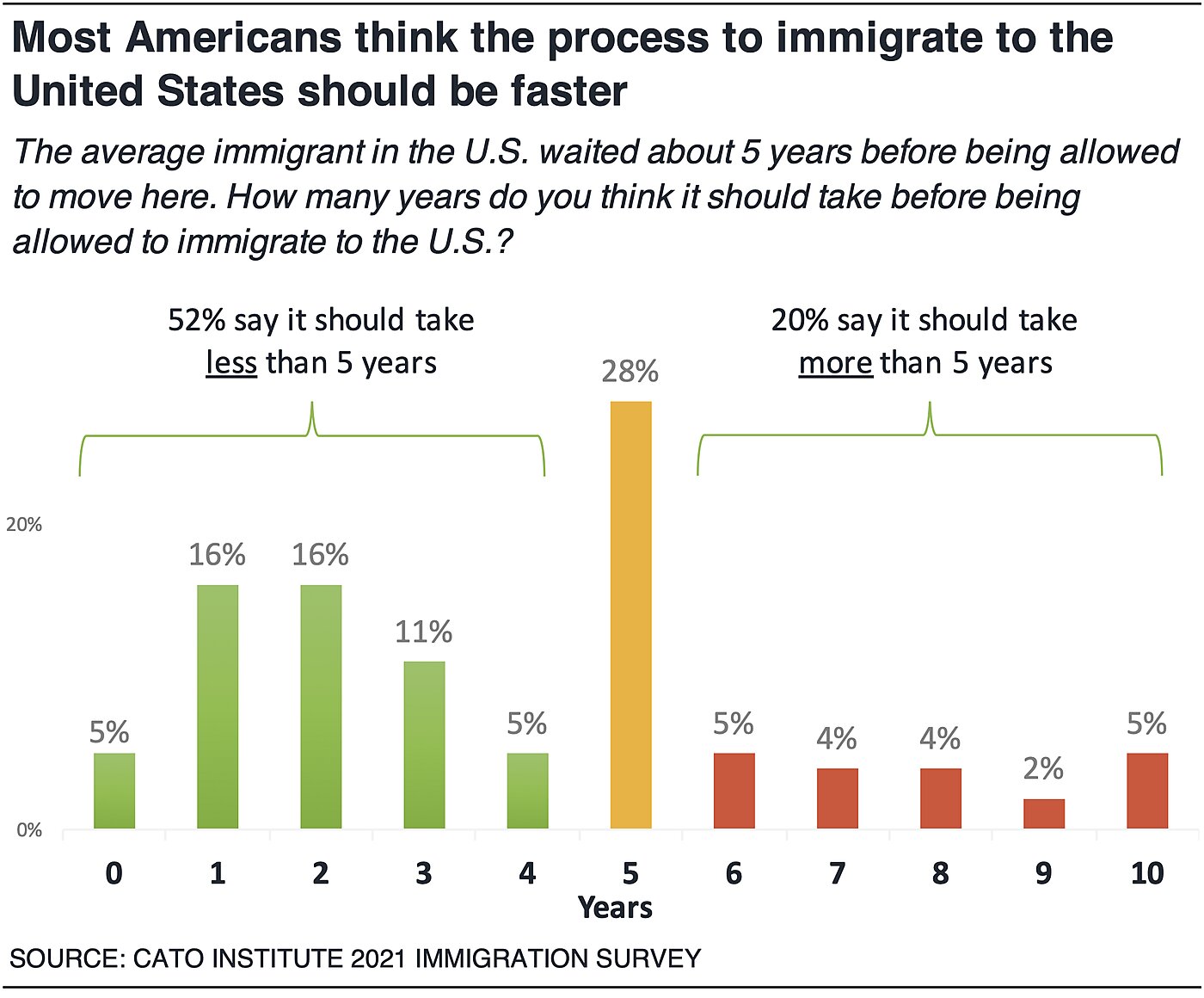 Most (63%) say that immigration policy should prioritize the interests of the U.S. and its current citizens. However, 54% of Democrats say that it should do what benefits the most people regardless of nationality, while 85% of Republicans say U.S. interests should come first. 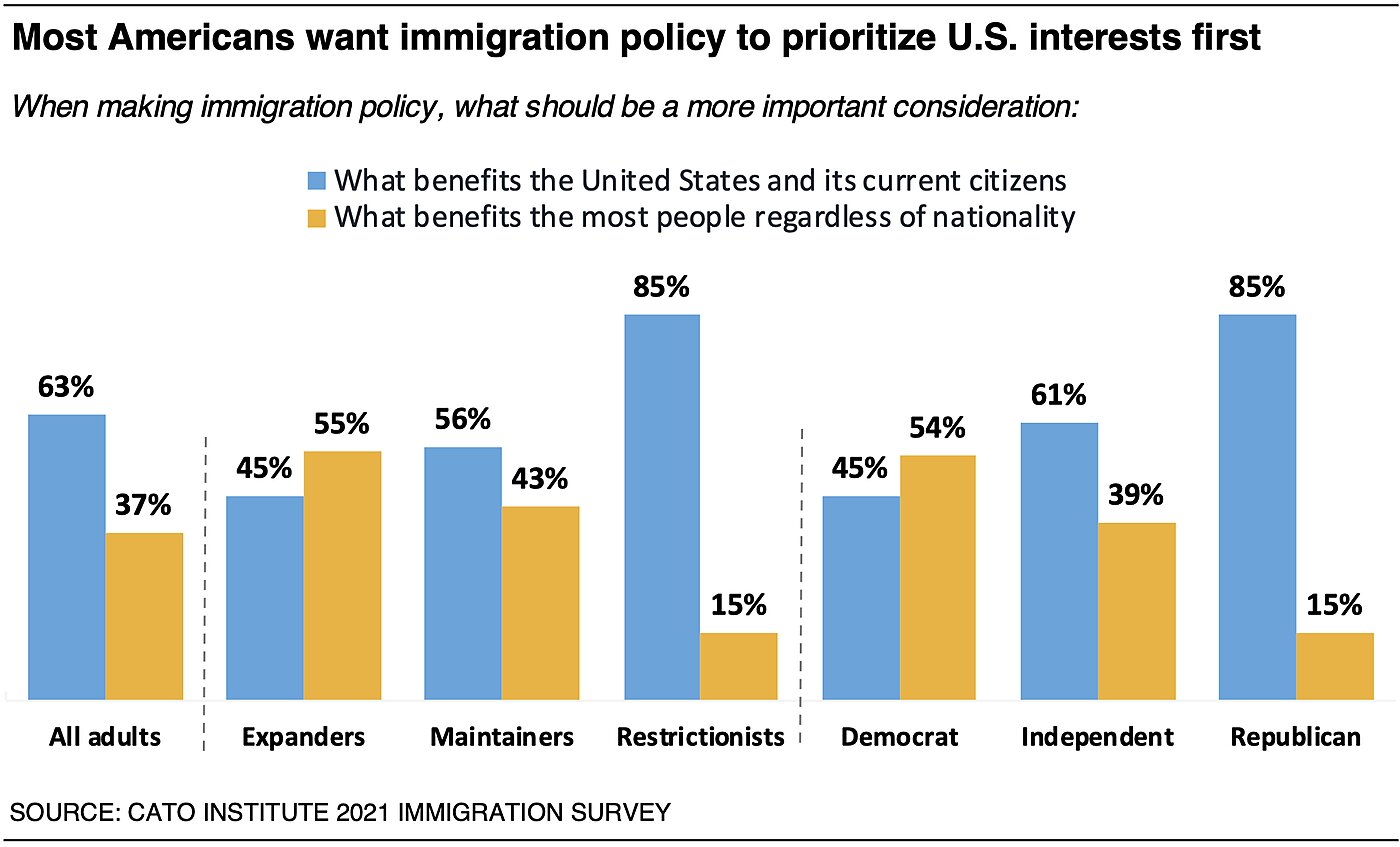 Less than half (47%) think voters should be able to vote on “how many immigrants are allowed to move to the United States each year and from which countries.” A majority (53%) say this “shouldn’t be up to voters.” Fifty‐​nine percent (59%) of Republicans say citizens should be able to directly vote on immigration levels and origins. However, two‐​thirds (65%) of Democrats disagree. Independents are evenly divided. 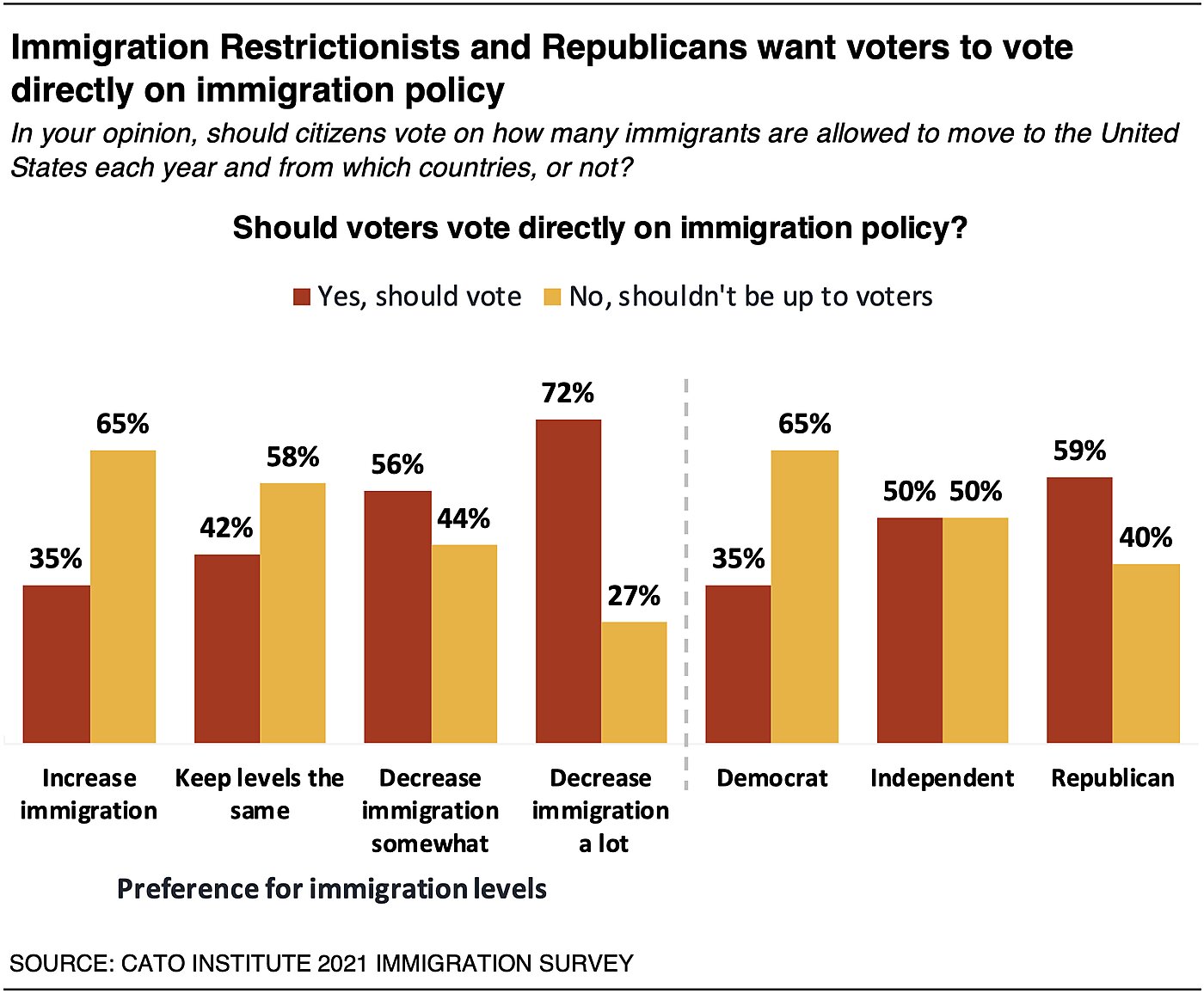 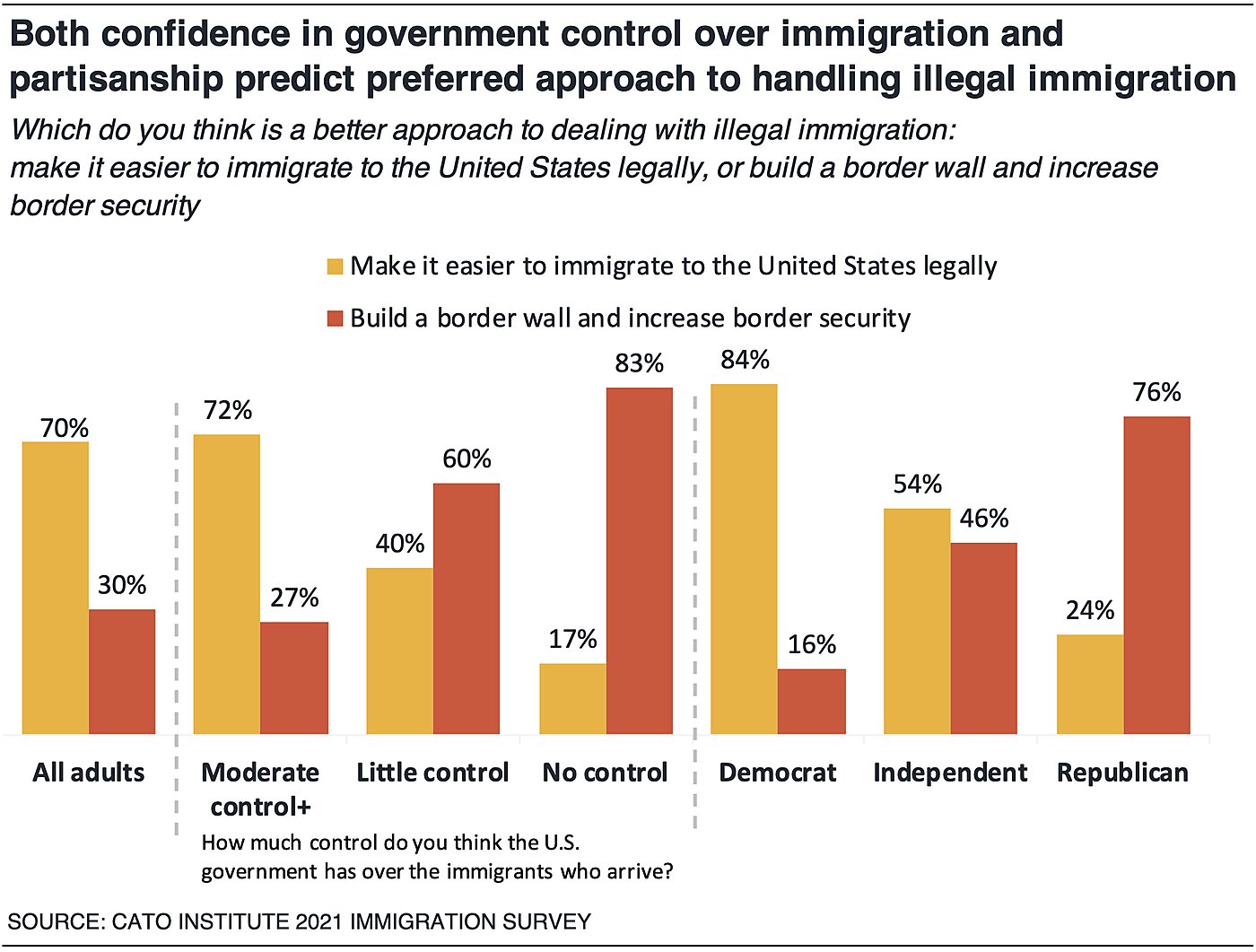 55% Support a Pathway to Citizenship for Unauthorized Immigrants

68% of Strong Liberals Say It is “Acceptable” to Illegally Immigrate to the U.S.

Nearly three‐​fourths (71%) of Americans say it is “unacceptable” for people to illegally immigrate to the U.S., although most (56%) support making the legal immigration process easier and 55% support providing a pathway to citizenship for the undocumented who are already here.

Strong liberals stand out, however, with 68% who say that illegal immigration is “acceptable.” This question divides Democrats. A majority (55%) of moderate liberals (as well as 84% of strong conservatives) disagree and say it is “unacceptable.”

A majority of Americans believe that most immigrants (57%) or immigrant households (54%) receive some form of means‐​tested government assistance. However, a majority (58%) of Americans (including 73% of Republicans and 47% of Democrats) would favor increasing immigration if immigrants proved before entering that they would not use such assistance. 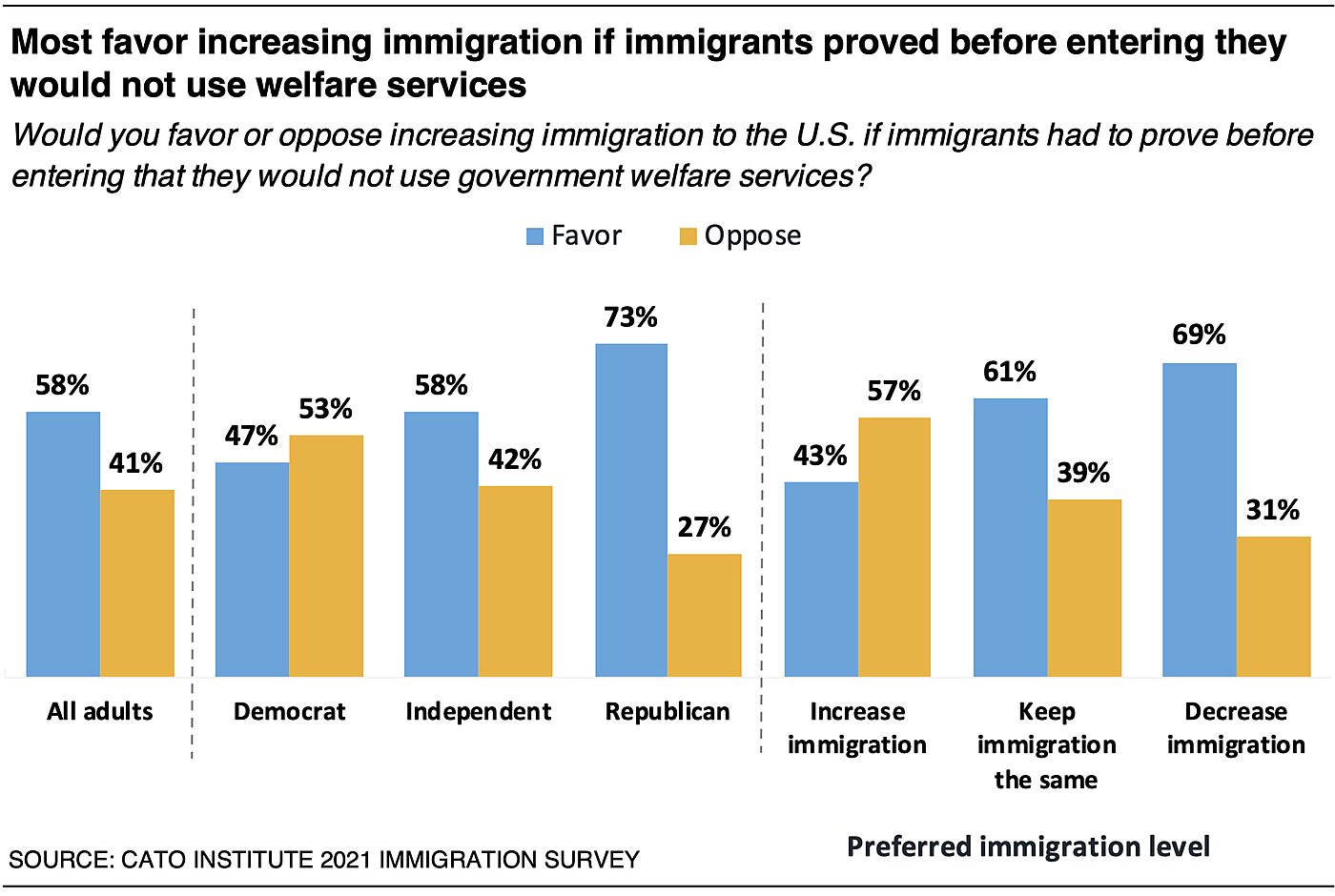 Most Americans (53%) oppose allowing immigrants to receive welfare services, including 78% of Republicans and 58% of independents, while 70% of Democrats favor. 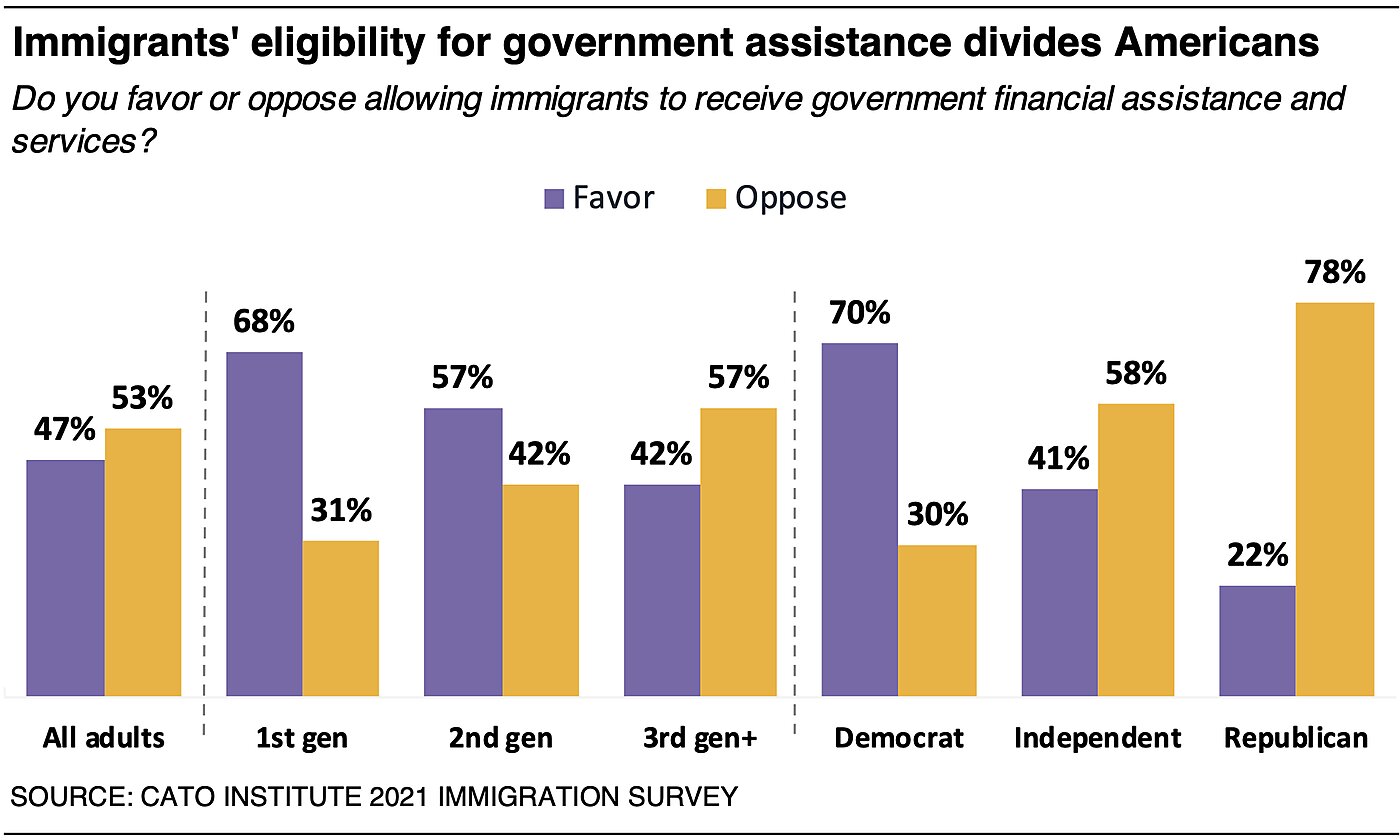 How Americans Feel Toward Immigrants

Americans differ in their perceptions of immigrants. When asked which best described how they feel about immigrants in the United States, 6% think of immigrants primarily as “family,” 19% as “friends,” 41% as “neighbors,” 21% as “guests,” 7% as “intruders,” and 6% as “invaders.” 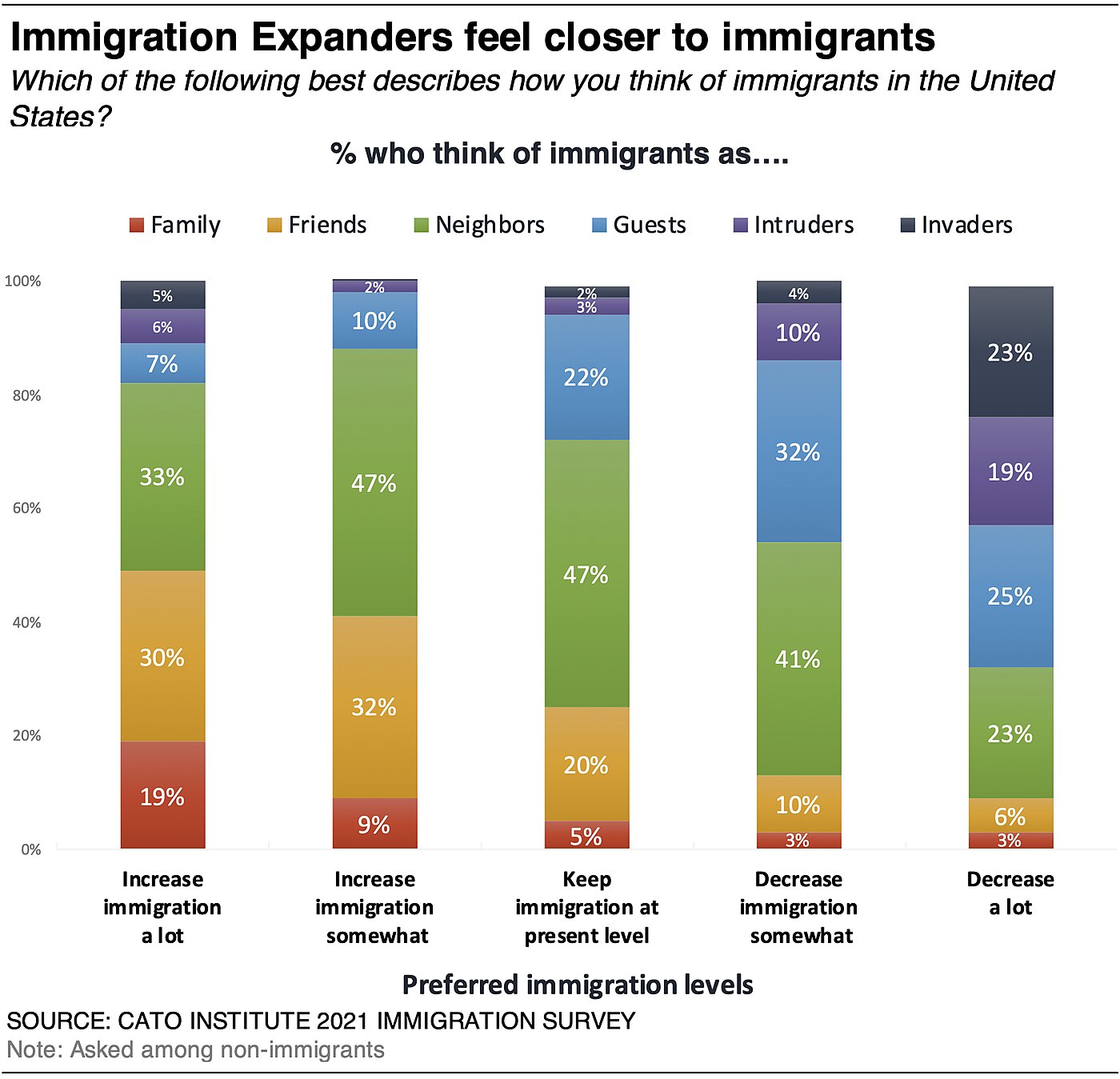 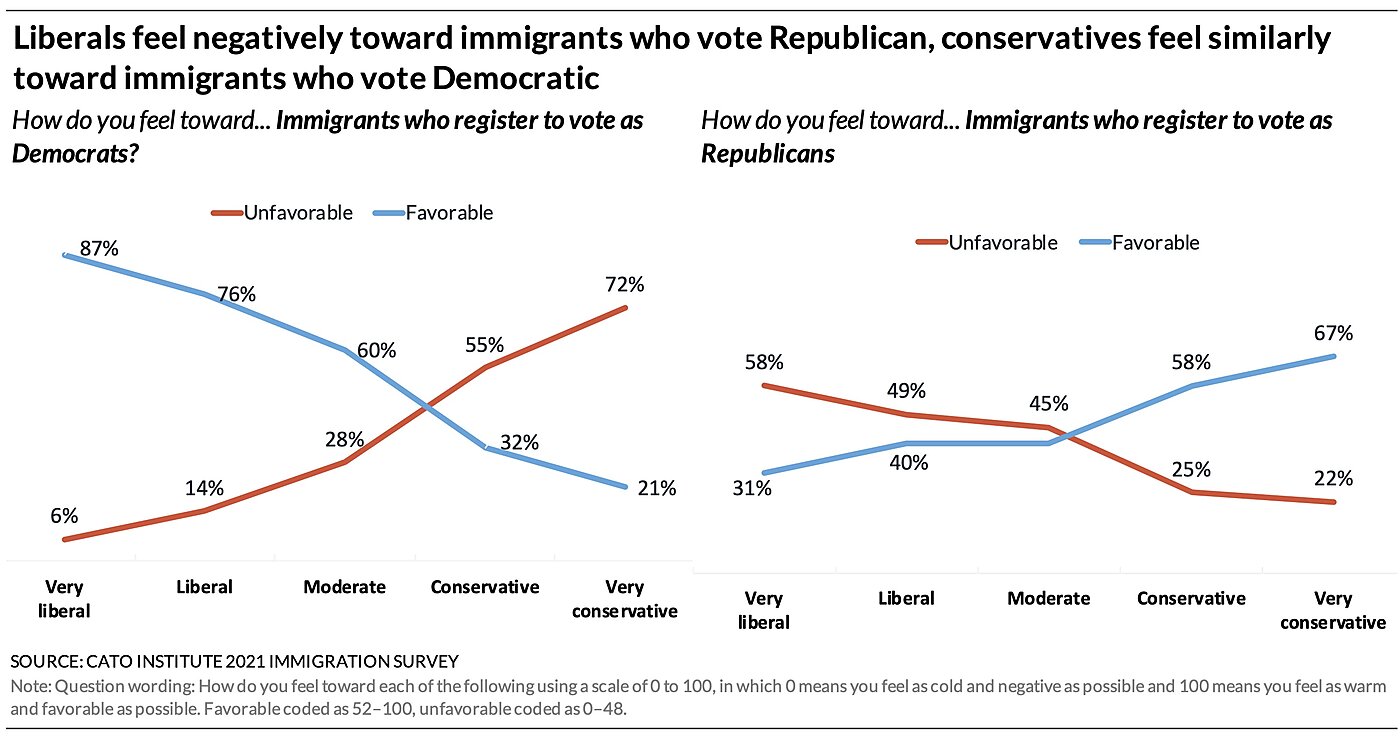 The public believes that immigration brings many benefits to the U.S.:

Most Favor a “Melting Pot of Cultures” 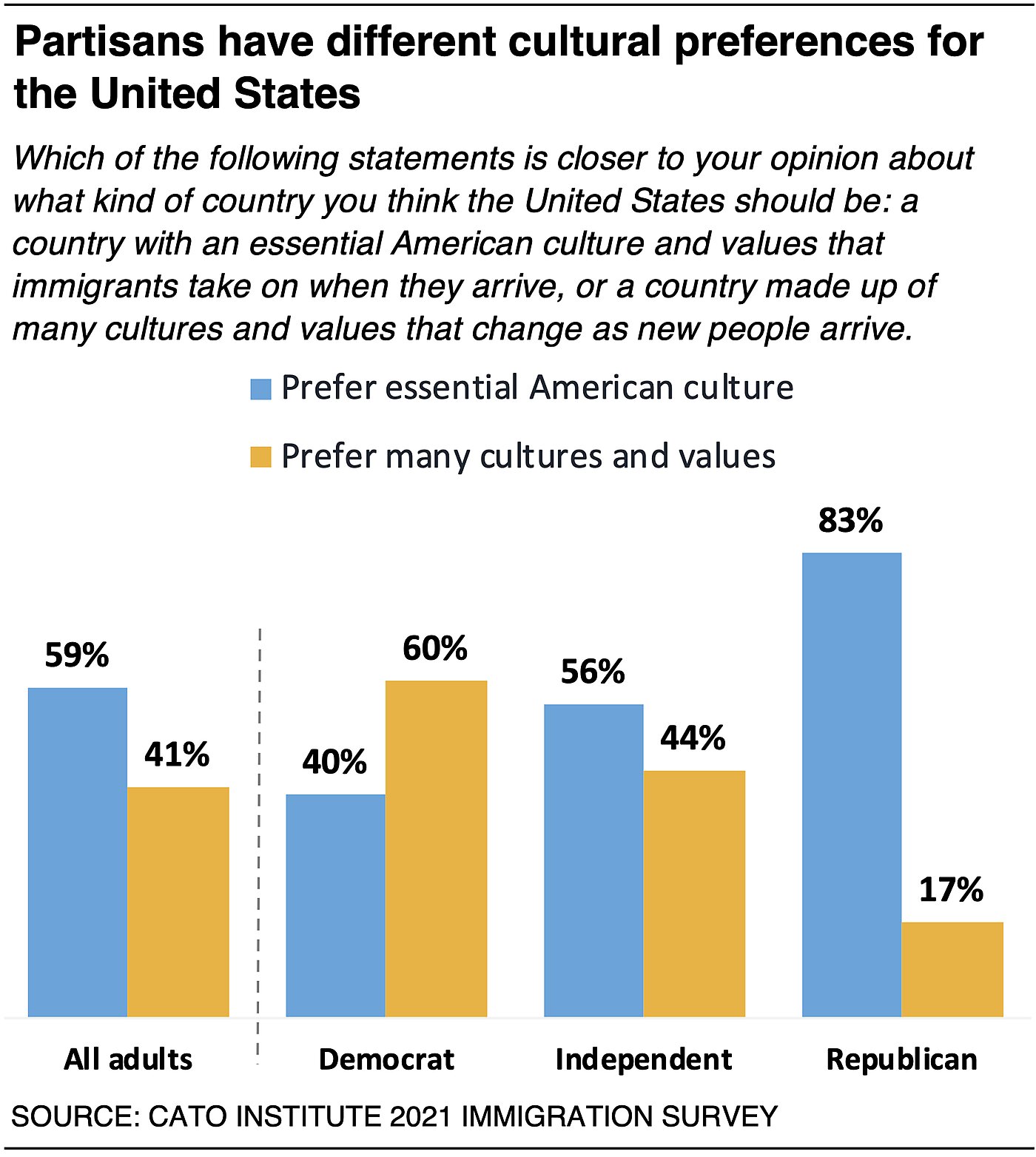 Nearly three‐​fourths (74%) of first‐​generation immigrants say most people who have immigrated to the U.S. over the past 20 years have mostly adopted essential American culture rather than retained their own cultures. However, about half of second‐​generation immigrants, and 53% of the third generation and higher believe immigrants have mostly retained their own cultures and values rather than adopting essential American culture.

What Do People Think It Means to Be an American?

In order to understand what Americans mean when they say they want immigrants to assimilate into the larger society, the survey asked respondents how important it is to them for immigrants to do the following things: 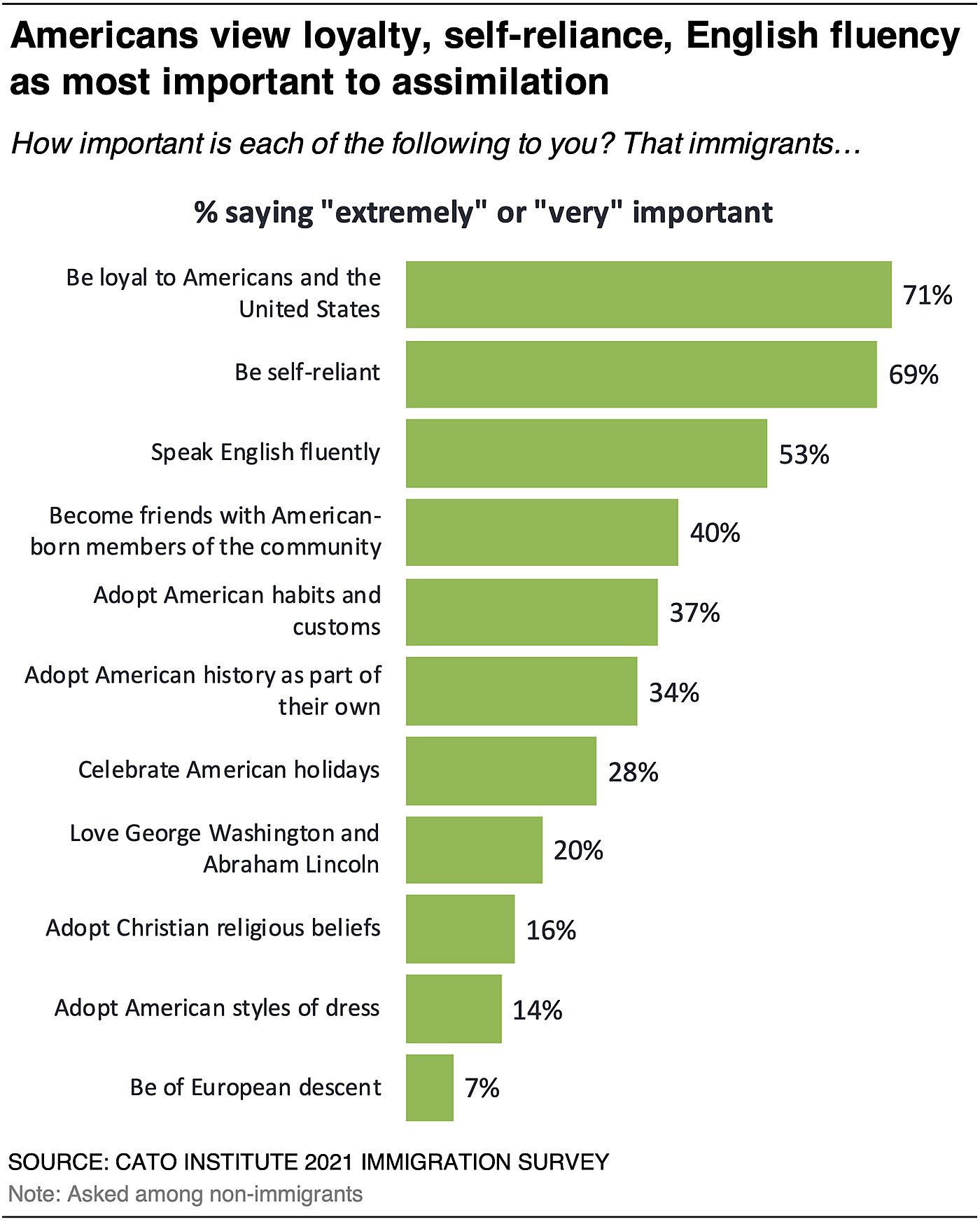 Democrats and Republicans disagree about assimilation preferences. Across the board, more Republicans think each of these factors is more important compared to Democrats. 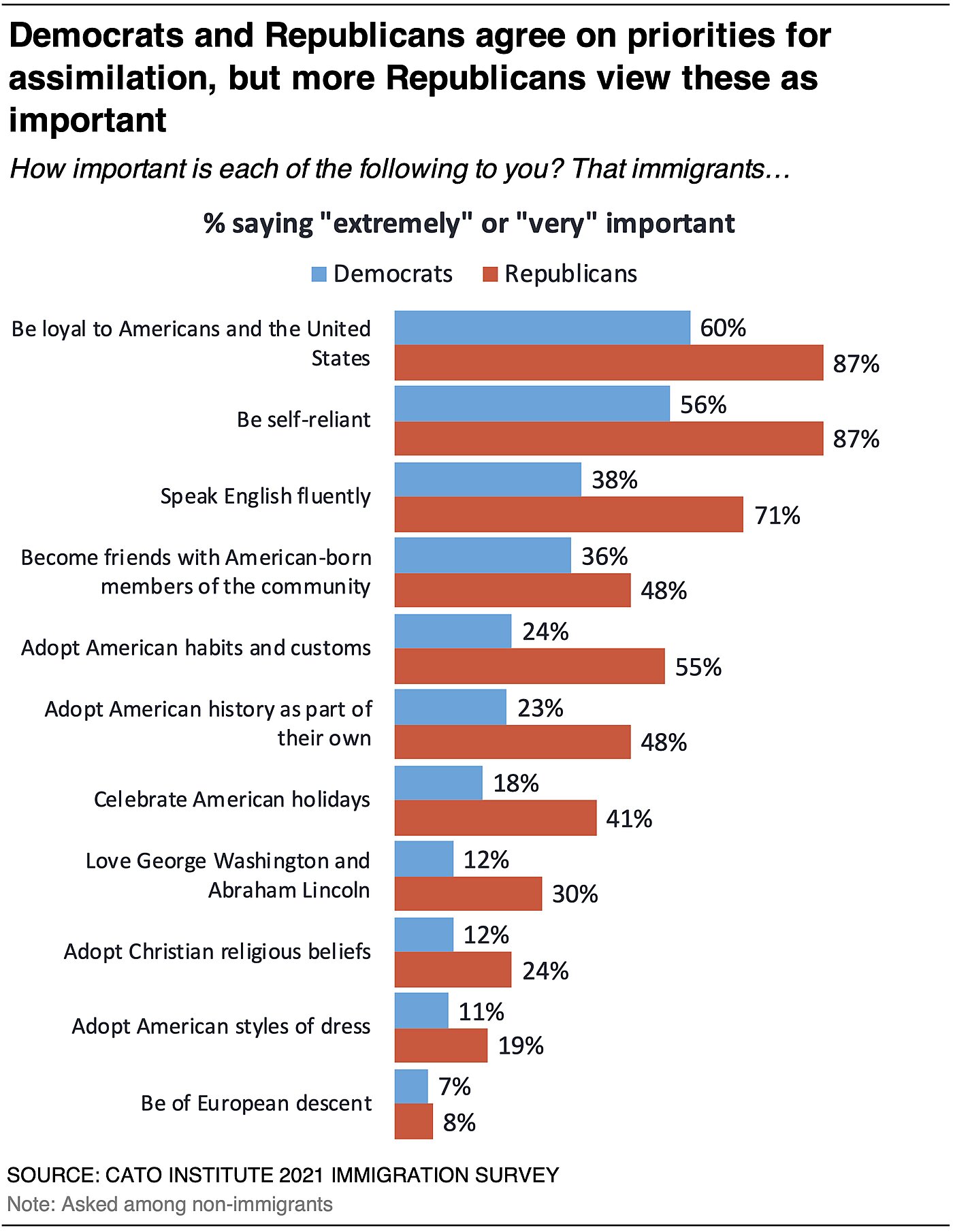 Many Americans Prefer Neighbors Similar to Themselves

The survey investigated the extent to which immigration attitudes are shaped by neighborhood preferences. The characteristics that Americans are most likely to say they care a “great deal” about having in common with their neighbors are language (45%), values and sentiments (34%), customs and habits (28%), holidays (22%), political values (21%), religious beliefs (16%), and race or ethnicity (11%).

Republicans are more likely than Democrats to greatly prefer having similar neighbors that speak their same language (62% vs. 32%), share their values and sentiments (44% vs. 28%), customs and habits (38% vs. 22%), and holidays (32% vs. 16%). Partisan differences nearly evaporate, however, when including the share who say they care at least “a little” or “somewhat” about these things. 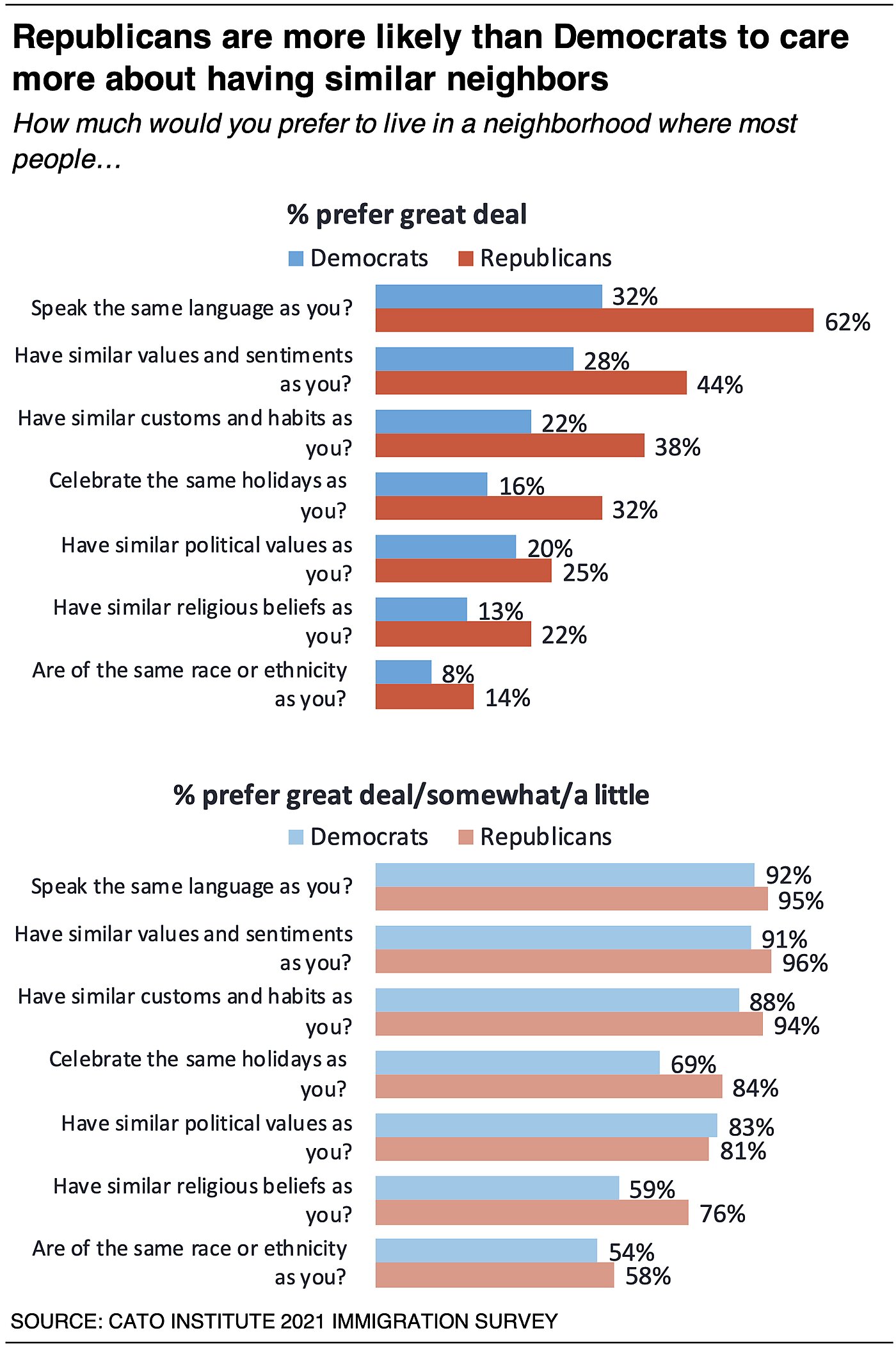 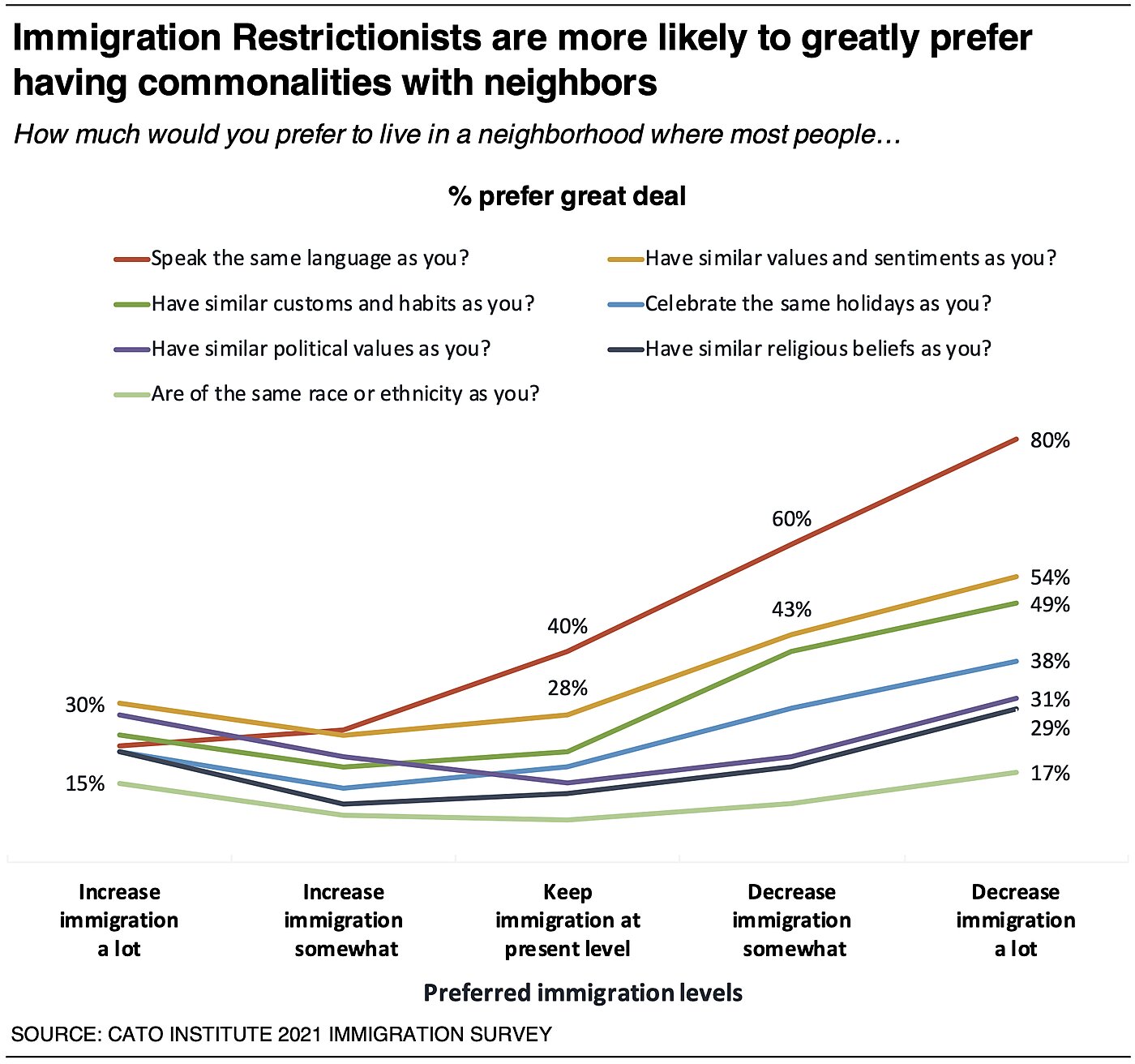 58% of Strong Liberals See Themselves as Global Citizens 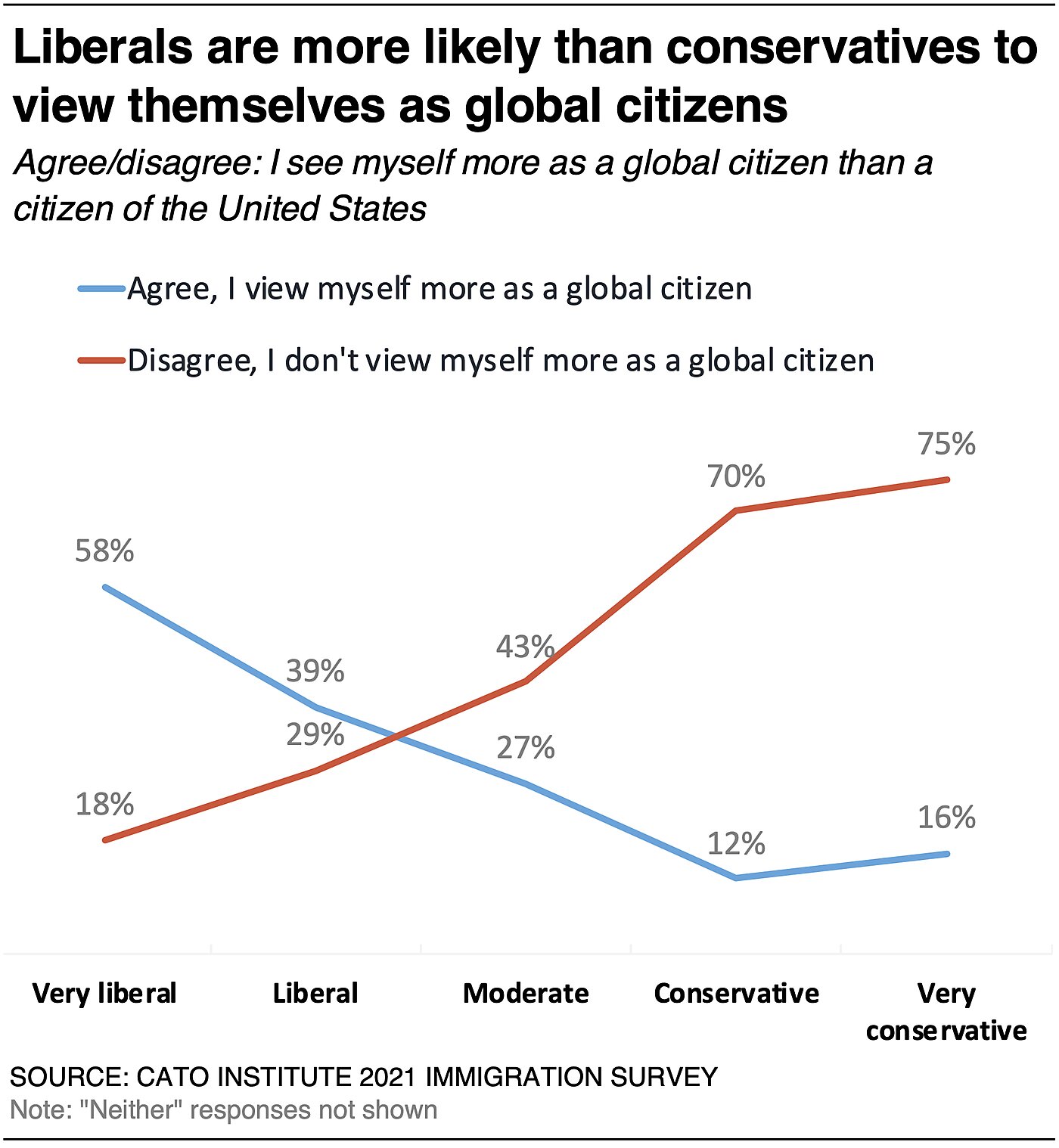 A novel thought experiment asked respondents if they felt a closer attachment to a stranger living in Wyoming or France. Democrats feel an equal connection to both (57%), while Republicans feel a stronger connection to the American stranger (70%).

Immigrants are Patriotic Despite More Experiences of Being Treated Like Outsiders

An overwhelming majority (80%) of immigrants say they feel grateful to be Americans. They say this despite being more likely to report experiences of being treated like an outsider. For instance, first‐​generation immigrants are more likely than the third generation and higher to say that others frequently or occasionally presumed they were not American (51% vs. 10%), confused them for a store employee where they didn’t work (45% vs. 31%), called them racial slurs (39% vs. 20%), or made negative comments about the food they ate (40% vs. 20%). 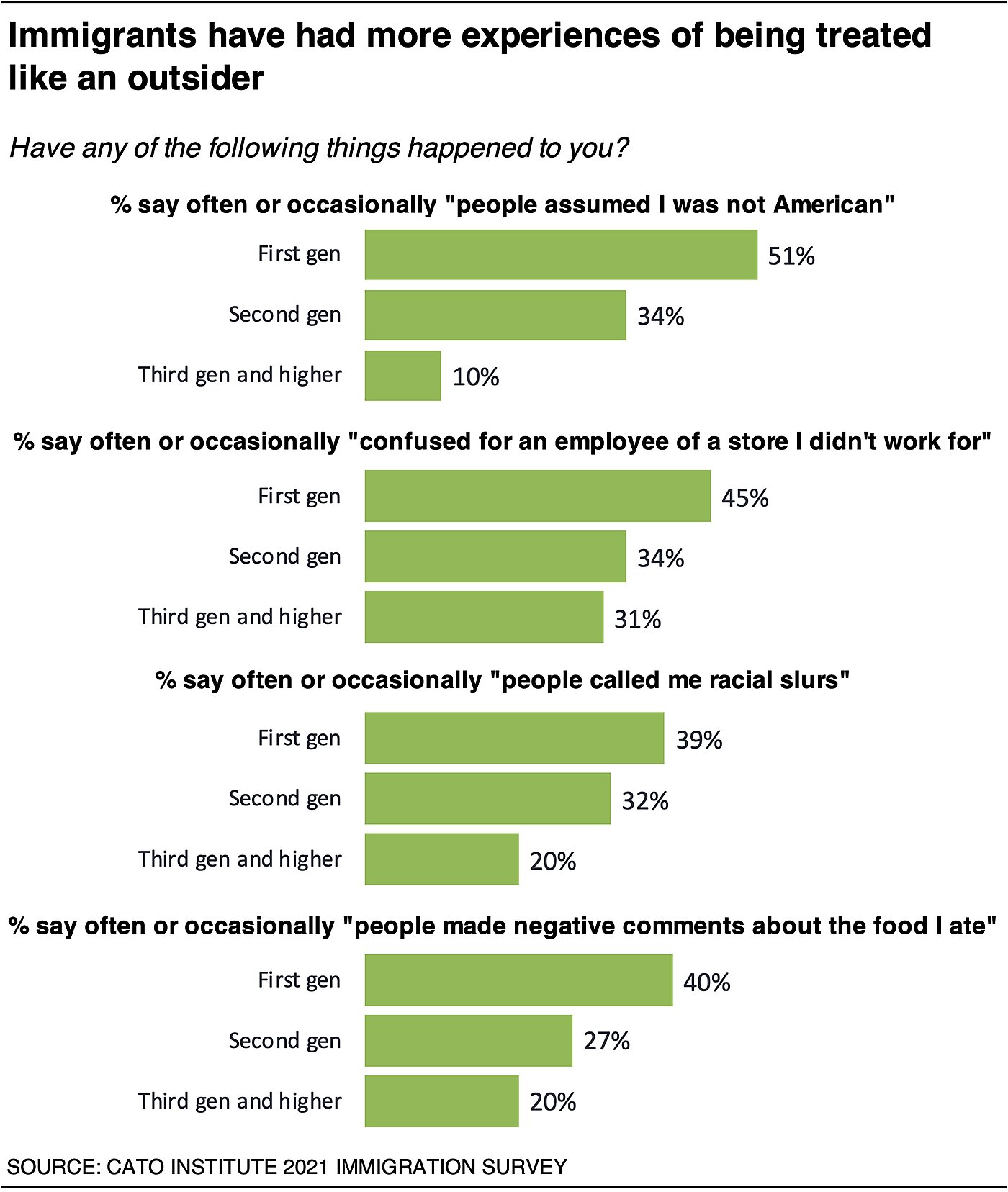 Most Immigrants Come for Economic Opportunity

Most first‐ and second‐​generation immigrants say their families came to the U.S. for economic opportunities (53%) and freedom (29%). Nearly half (46%) say their families came fleeing persecution of some kind, including political (20%), religious (12%), or general violence (17%). Others came to attend U.S. colleges or K-12 public schools (27%), be with family (20%), and 8% came for welfare benefits. 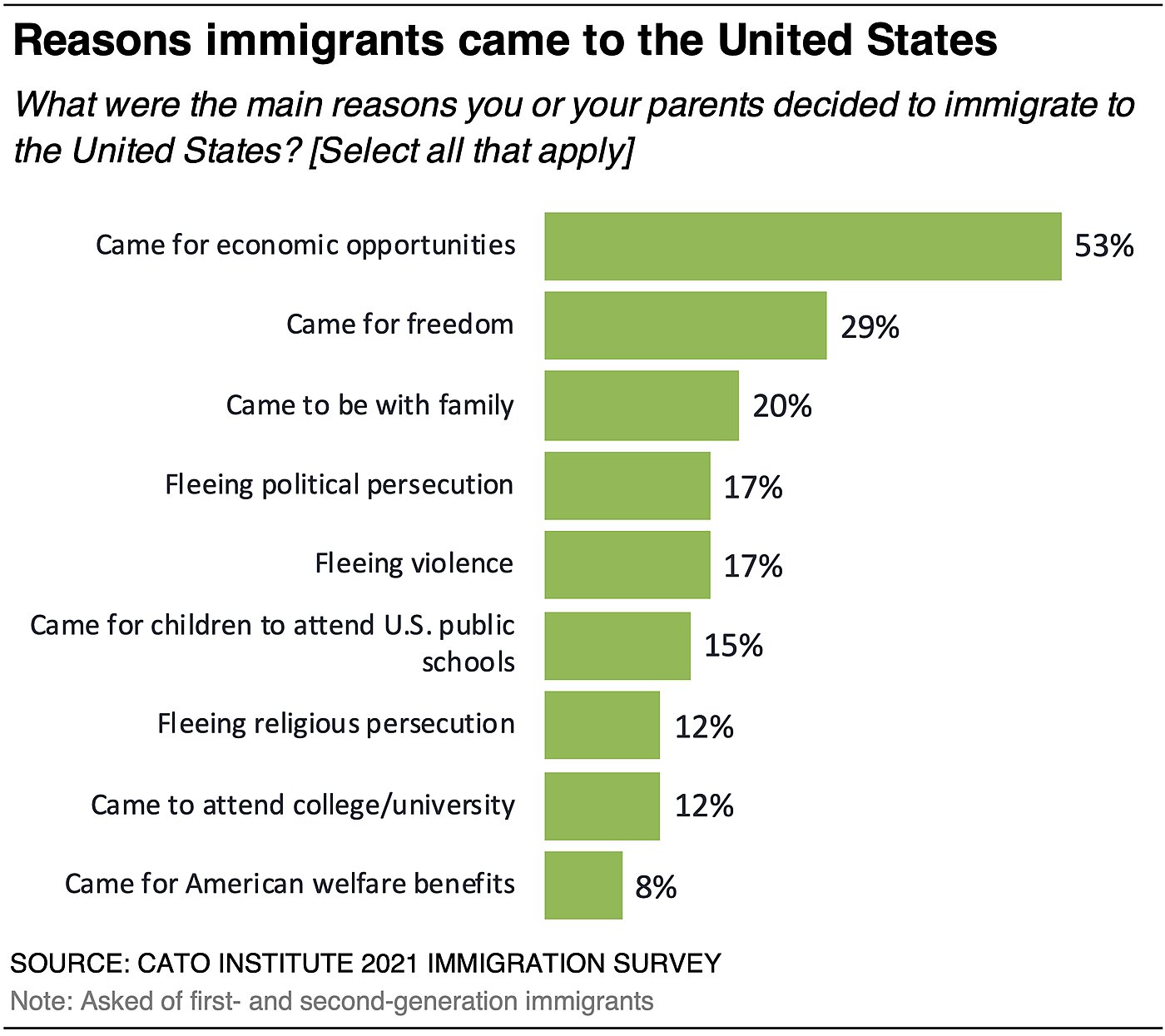 A majority (54%) of Americans say that an immigrant legally residing in the U.S. who “disliked America and said Americans are racist” should be deported, while 46% oppose. Republicans (69%) and independents (52%) agree, while Democrats oppose (57%).

Mentioning tax rates diminishes the gap between immigrants and non‐​immigrants when it comes to the size and scope of government. Without mentioning taxes, about two‐​thirds of first‐ (64%) and second‐​generation (69%) immigrants and 51% of the third generation and higher favor “larger government providing more services.” However, if providing these additional services requires higher taxes, then 50% of first‐​generation, 51% of second‐​generation, and 61% of the third generation and higher prefer a smaller government offering fewer services and low taxes. 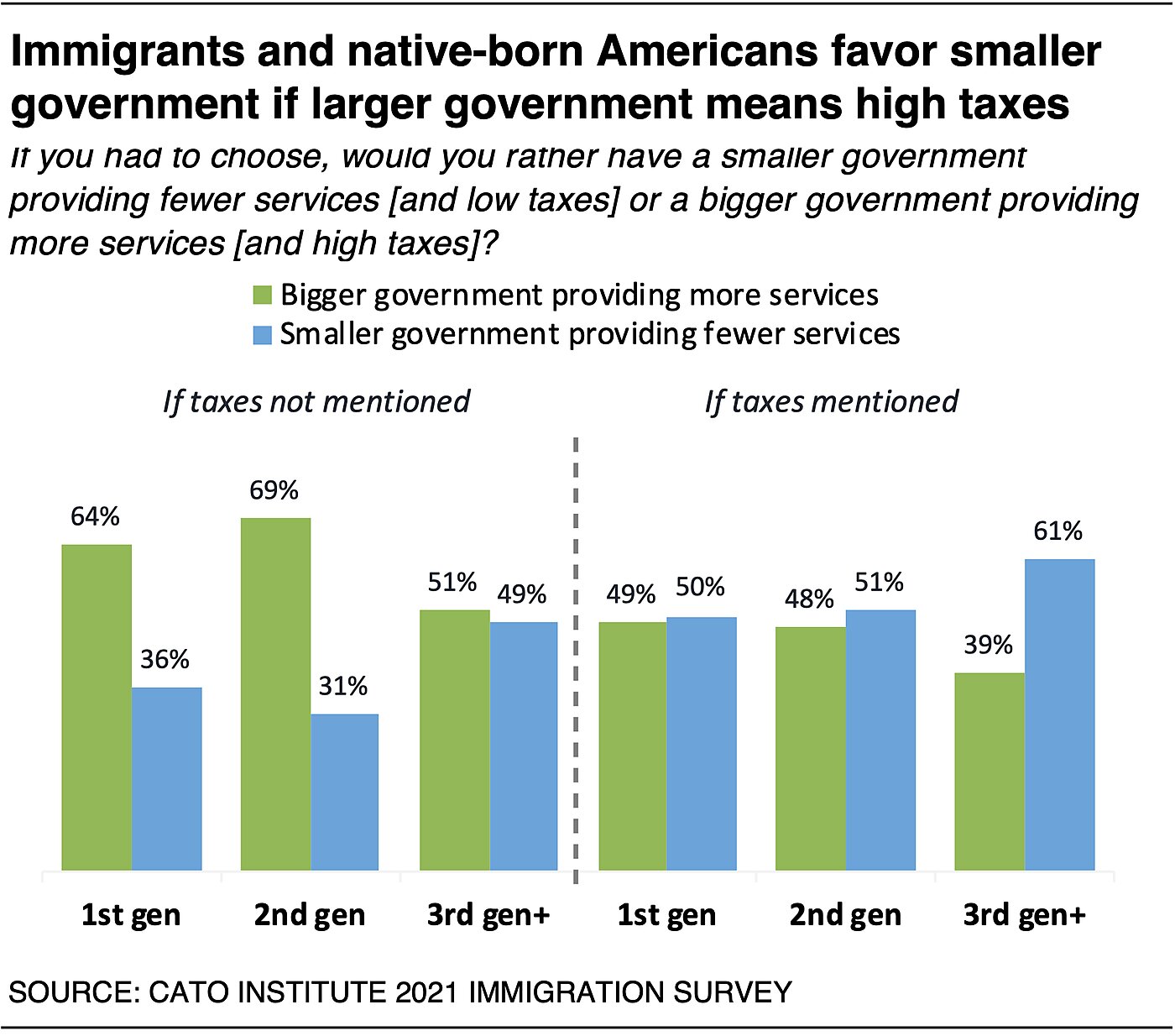 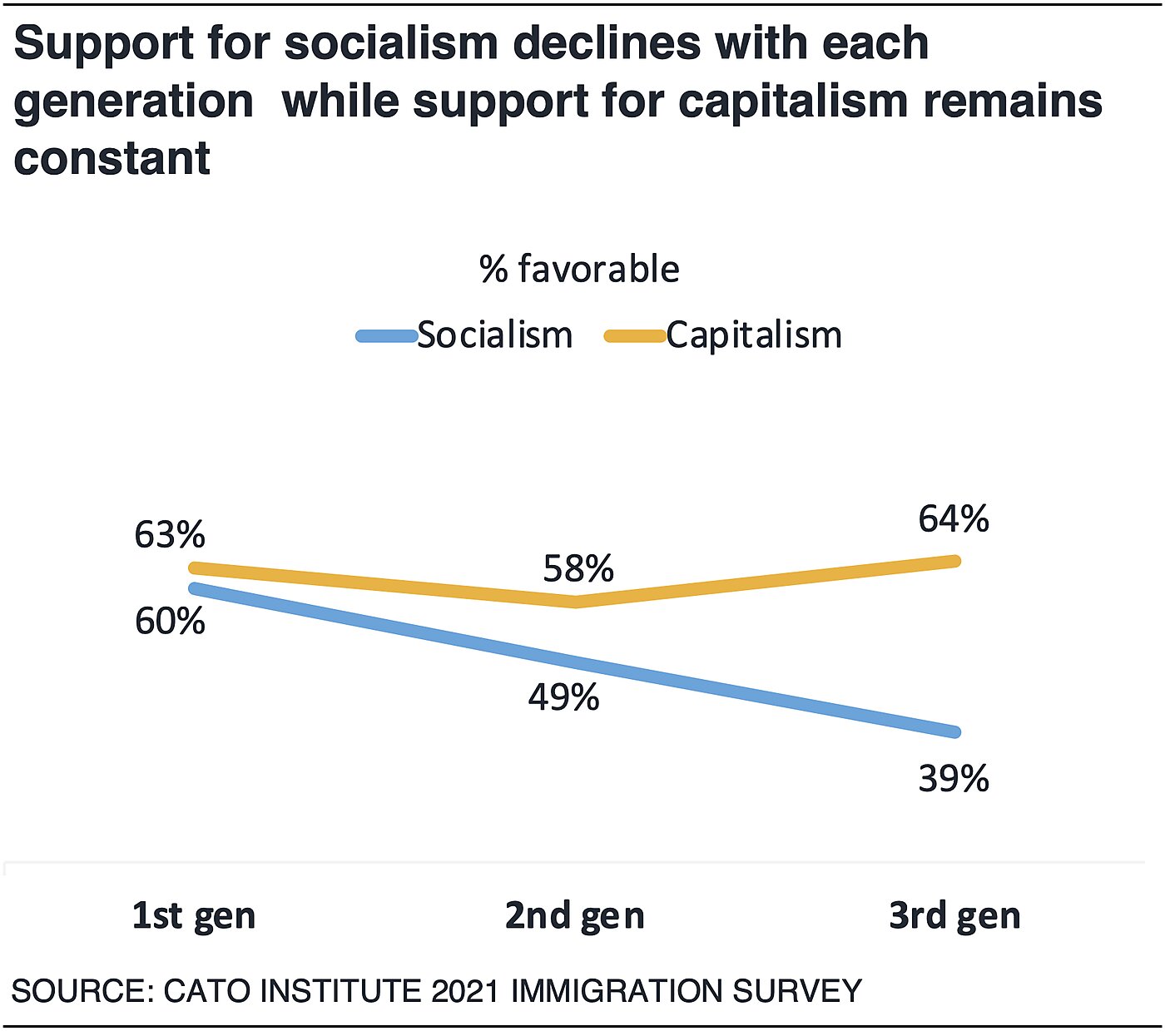 Majorities of Americans across immigration backgrounds (about 6 in 10), Republicans (81%), and independents (65%) believe the free market gives people a fair chance rather than exploits the marginalized. Democrats stand out, with a majority (55%) who feel the free market survives through exploitation. 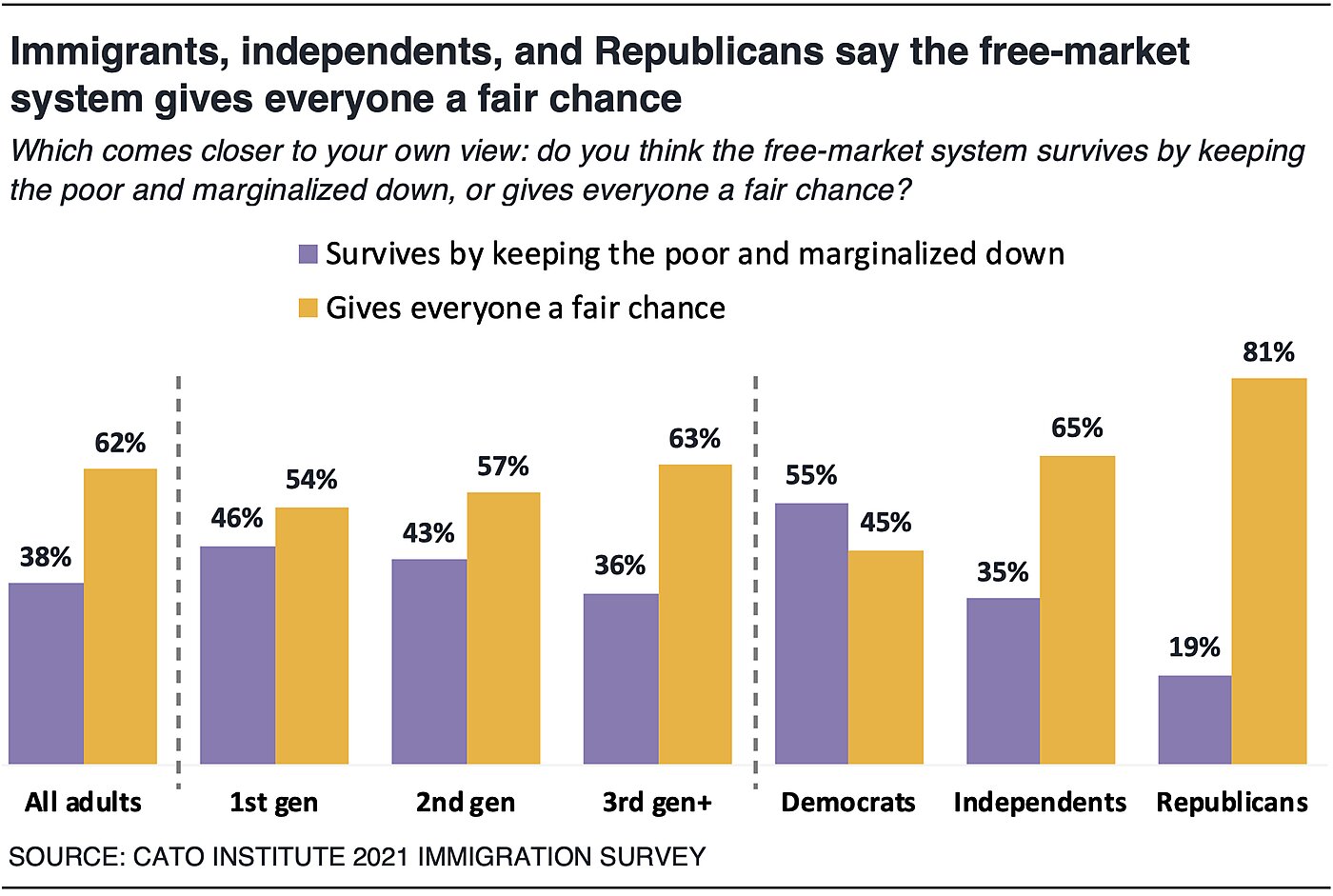 The Cato Institute 2021 Immigration and Identity National Survey was designed and conducted by the Cato Institute in collaboration with YouGov. YouGov collected responses online March 5 to 15, 2021 from a national sample of 2,600 Americans 18 years of age and older. Restrictions are put in place to ensure that only the people selected and contacted by YouGov are allowed to participate. The margin of error for the survey is +/- 2.21 percentage points at the 95% level of confidence.

The topline questionnaire, full methodology, and report of the survey findings can be found here.