The Treasury Department is said to be studying the idea of providing some sort of inflation-protection (indexing) for the taxation of capital gains.  Rep. Devin Nunes (R-CA) has introduced a bill  (H.R. 6444) to do just that.   Predictably, Washington Post writer Matt O’Brien instantly dismissed the idea as “Trump’s new plan to cut taxes for the rich.”

O’Brien relies on a two-page memo from John Ricco which yanks mysterious estimates out of a black box – the closed-economy Penn-Wharton Budget Model.   The “microsimulation model” predicts that the Top 1 Percent’s share of federal income taxes paid could fall from 28.6% to 28.4% as result of taxing only real capital gains.  “That’s real money,” exclaims O'Brien.

No model can estimate how much revenue might be lost by indexing (if any) because that depends on such unknowable things as future asset values, future tax laws and future inflation.   Yet Mr. Rico magically “projects” future realizations to “estimate that such a policy would reduce individual tax revenues by $102 billion during the next decade [sic] from 2018-2027.”   Does that imaginary $102 billion still look like “real money” when spread over Rico’s extended 20-year “decade?”   It would be a microscopic fraction of CBO’s projected individual income taxes of $21.1 trillion over that period.

One problem with the notion that indexing capital gains could only benefit the top 5 percent (over $225,251 in 2016) is that it wrongly assumes the capital gains tax only applies to stock market gains. Another Washington Post article said, “Researchers have estimated that the top 5 percent of households in terms of income hold about two-thirds of all stock and mutual fund investments, putting wealthier Americans in the position of benefiting much more than others from any changes to capital gains rules.”  But the capital gains most likely to be seriously exaggerated by decades of inflation are not gains from selling financial assets, but from selling real assets.  After many years of even moderate inflation, an unindexed tax may be imposed on purely illusory “gains” from the sale of real property that actually involve a loss of real purchasing power.  A 2016 report from the Congressional Budget Office and Joint Committee on Taxation, “The Distribution of Asset Holdings and Capital Gains” reports that Americans held $7.5 trillion in stocks and mutual funds in 2010, but $12.2 trillion in private businesses and $8.5 trillion in nonresidential real estate.

A related problem with conventional distribution tables is that they add realized capital gains to income in the year in which a farm, building or business is sold, which makes it true by definition that unusually large one-time gains are received by those with “high incomes” (including those gains).

A much bigger problem is, as the first graph demonstrates, that the capital gains tax is voluntary: If you don’t sell, you pay no tax.  When the top tax rate on realized gains was 28-40%, very few gains were realized – particularly among top-bracket taxpayers. When the top tax rate fell to 20% in 1982-96 and 1997-2000, and to 15% in 2003-2007, inflation-adjusted real revenue from the capital gains tax soared for several years (market crashes in 2001 and 2009 overwhelmed taxes, of course). This is just one reason static estimates of the alleged revenue loss from indexing are not credible: The elasticity of realizations is extremely sensitive to the tax rate and indexing is one way to reduce that tax rate (and raise realizations) for assets held for a long time.

If anyone wanted to cut taxes paid by the Top 1%, then raising the capital gains tax rate is the surest way to accomplish that.  The second graph shows the Top 1%'s share of individual income reported to the IRS (in data from Thomas Piketty and Emmanuel Saez) went way up whenever the tax rate on capital gains went down.  By contrast, top 1% income from realized gains remained depressed whenever the tax was 28% (1987-1996) or higher (1969-77).  The rush to sell before an increase in the capital gains tax in 1987 meant a third of all “income” reported by Top 1% taxpayers in 1986 was from bunching the realization of capital gains. 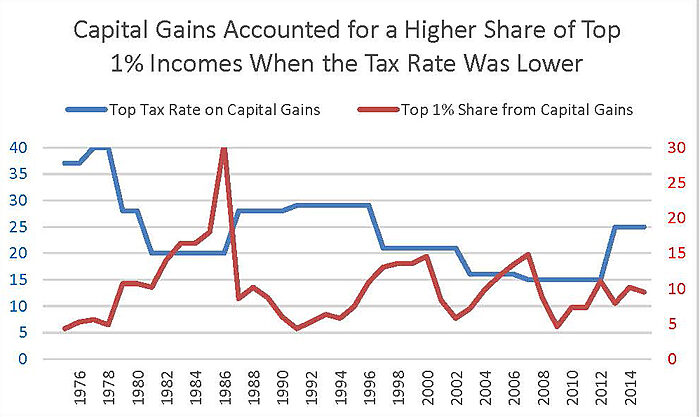 The inverted idea that a higher tax on capital gains is an effective way to “soak the rich” has not even been politically successful, because it is not so much an assault on investing as it is an assault on aging.

George McGovern’s seemingly clever 1972 campaign slogan that “money earned by money should be taxed as much as money earned by men” meant he favored a minimum tax of 75% on large capital gains (e.g., from selling the family farm or firm before retirement).  That frightened seniors who counted on selling-off accumulated savings to finance retirement.  Senator McGovern won only 36% of the vote of those age 50 or more.   A high tax on realizing capital gains turned out to be bad politics as well as bad economics.