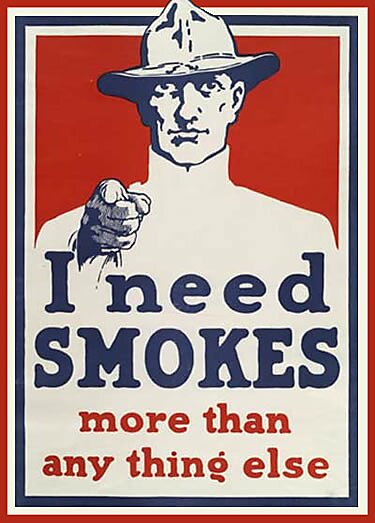 As I noted in my book The Rule of Lawyers, it’s not by happenstance that the sharpest increases in Americans’ smoking rates have come in wartime. Nicotine staves off the boredom, fear, and loneliness of life on the front lines, and the smoking habit encourages socialization among troops. Years later, the federal government was at pains to downplay its vigorous promotion of tobacco use as part of both the WWI and WWII war effort. (It had a sideline in promoting some other important forms of substance abuse as well, notably amphetamine‐​munching.)


This poster, of World War I vintage, would have made a good illustration for the article I wrote in Reason a while back on government contributions to product‐​related risk. For some other tobacco‐​related war poster themes, check the Hoover Institution political poster database.