A new Pew poll finds that three out of four "consistent liberals" would rather live in a community "where the houses are smaller and closer to each other" but within walking distance of schools, stores, and restaurants. Conversely, three out of four "consistent conservatives" would rather live in a larger home on a large lot even if it means driving to schools, stores, and restaurants. 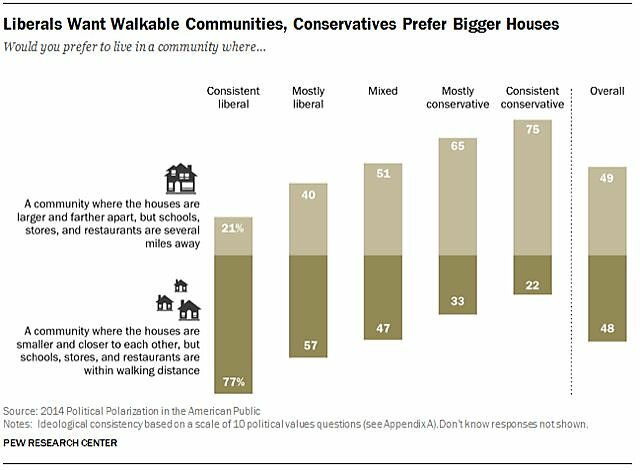 Pew says this shows that "differences between right and left go beyond politics," which Pew claims is one of the seven most important things to know about polarization in America. Yet the left has turned the choice between a traditional suburb and a so-called walkable community into a political issue, so it is no wonder that people's views on this choice are polarized.

Disappointingly, Pew's report on polarization defines everything in terms of liberal vs. conservative. Pew's big news is that the share of Americans who are consistently conservative or consistently liberal has more than doubled since 1994--yet you have to read deep into the report to learn that these groups make up just 21 percent of the country. The report says little about the other 79 percent of Americans, yet you'd think they would be important since they outnumber the consistent ones by almost four to one.

Libertarians should have been discussed because issues of personal freedom help explain much of the polarization that the report documents. For conservatives, the decision to live in a drivable vs. a walkable community is a mere lifestyle choice. For liberals, it is matter of life and death, making them eager to impose their preferences on others.

This attitude is the source of the increasing polarization which, Pew believes, began growing in the 1970s. Consistent liberals and consistent conservatives both frighten their opponents for the same reason: they are both quite willing to sacrifice your freedom in order to attain their goals.

Social conservatives believe, for example, that an embryo is human, and they are willing to sacrifice a woman's freedom to terminate her embryo or fetus in order to achieve their idea of a moral society. Of course, the key Supreme Court decision on abortion was made in 1973.

Liberals believe that all life on earth depends on us reducing greenhouse gas emissions, and they are willing to sacrifice other peoples' freedom to drive or live in a big house in order to save the planet. Of course, the whole climate change issue grew out of environmental issues that first hit public awareness in about 1970.

Abortion and climate change aren't specifically mentioned in the ten questions used in the Pew poll, but they include proxies for those issues. The questions are listed in full on page 79 of the report, but briefly they are:

A libertarian would say that at least seven of these questions are really about freedom. Questions 2, 6, 8, 9, and 10 specifically deal with freedom. Questions 3 and 4 have to do with freedom in the sense that confiscating money from you to give to someone else infringes on your freedom (and besides can give the recipients the wrong incentives). Similarly, libertarians might say question 5 should have asked, "Is the failure of more blacks to get ahead the result of racism or bad incentives created by the welfare state?"

Libertarians would respond to question 1 by arguing that government is both wasteful and infringes on people's freedom, and even if government were efficient they would object to it because of its tendency to reduce freedom. And another way of asking question 7 would be, "Is it appropriate to use our military to impose our will on other nations, taking away their freedom?"

Almost all of these issues go back to the 1960s and 1970s, a period that started encouraging sexual freedom, minority rights, environmental protection, and a federal "war on poverty," while questioning foreign policy. Only the immigration and corporate profit issues date to another time.

Since so many issues trace back to the 1960s and 1970s, it is no wonder that America has become more polarized since then. Some argue that polarization has resulted from a perceived decline in income equality, but I think this is less important, partly because many of the liberals who make the most of the inequality issue tend to have higher incomes than many of the conservatives who just want government to leave them alone.

Instead, the real source of polarization is this: do I have the right to curtail your freedom to achieve a goal I believe is important even if you don't share that goal? Those who want to end polarization need to to find ways for people to achieve their goals without reducing other peoples' freedom.