I'm still capable of being shocked when other people make outlandish assertions.

Like the policy wonk who claimed that capitalism is actually coercion, even though free markets are based on voluntary exchange. Or the statist columnist who argued people aren't free unless they're entitled to other people's money, even though that turns some people into unfree serfs. 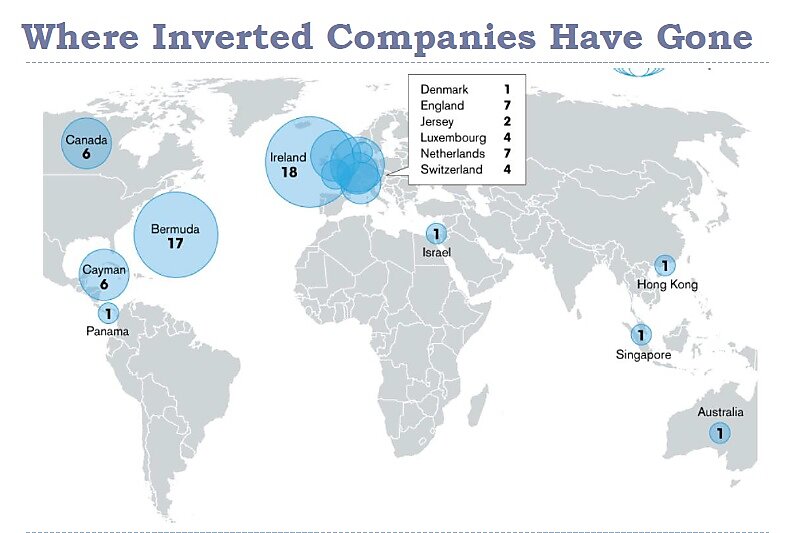 Here's another example of upside-down thinking. It deals with the "inversion" issue, which involves American-chartered companies choosing to redomicile overseas.

A column in the Huffington Post implies that Pfizer is some sort of economic traitor for making a sensible business decision to protect the interests of workers, consumers, and shareholders.

Pfizer...wants to turn its back on America by claiming to be an Irish company through an offshore merger, giving it access to Ireland’s low tax rates. The change would only be on paper. The company would still be run from the United States, enjoying all the benefits of being based in America—such as our taxpayer-supported roads, public colleges, and patent protections—without paying its part to support them.

There's a remarkable level of inaccuracy in that short excerpt. Pfizer wouldn't be claiming to be an Irish company. It would be an Irish company. And it would still pay tax to the IRS on all U.S.-source income. All that changes with an inversion is that the company no longer would have to pay tax to the IRS on non-U.S. income. Which is money the American government shouldn't be taxing in the first place!

Here's more from the article.

Pfizer could walk out on its existing U.S. tax bill of up to $35 billion if its Irish tax maneuver goes forward. That’s what it already owes the American people on about $150 billion in profits it has stashed offshore, much of it in tax havens.

Wrong again. The extra layer of tax on foreign-source income only applies if the money comes back to the United States. Pfizer won't "walk out" on a tax liability. Everything the company is doing is fully compliant with tax laws and IRS rules.

Here's another excerpt, which I think is wrong, but doesn't involve misstatements.

When corporations dodge their taxes, the rest of us have to make up for what’s missing. We pay for it in higher taxes, underfunded public services, or more debt.

For what it's worth, the "rest of us" aren't losers when there's an inversion. All the evidence shows that ordinary taxpayers benefit when tax competition puts pressure on governments.

By the way, the author wants Obama to arbitrarily and unilaterally rewrite the rules .

President Obama can stop Pfizer’s biggest cash grab: that estimated $35 billion in unpaid taxes it wants to pocket by changing its mailing address. There are already Treasury Department rules in place to prevent this kind of overseas tax dodge. As now written, however, they wouldn’t apply to Pfizer’s cleverly-crafted deal. The Obama Administration needs to correct those regulations so they cover all American companies trying to exploit the loophole Pfizer is using. It already has the authority to do it.

Needless to say, Pfizer can't "grab" its own money. The only grabbing in this scenario would be by the IRS. Since I'm not an international tax lawyer, I have no idea if the Obama Administration could get away with an after-the-fact raid on Pfizer, but I will note that the above passage at least acknowledges that Pfizer is obeying the law.

Now let's look at some analysis from someone who actually understands the issue. Mihir Desai is a Harvard professor and he recently explained the reforms that actually would stop inversions in a column for the Wall Street Journal.

Removing the incentive for American companies to move their headquarters abroad is a widely recognized goal. To do so, the U.S. will need to join the rest of the G-7 countries and tax business income only once, in the country where it was earned. ...Currently, the U.S. taxes the world-wide income of its corporations at one of the highest rates in the world, but defers that tax until the profits are repatriated. The result is the worst of all worlds—a high federal statutory rate (35%) that encourages aggressive transfer pricing, a significant restriction on capital allocation that keeps cash offshore, very little revenue for the Treasury, and the loss of U.S. headquarters to countries with territorial tax systems.

In other words, America should join the rest of the world and adopt a territorial tax system. And Prof. Desai is right. If the U.S. government stopped the anti-competitive practice of "worldwide" taxation, inversions would disappear.

That's a lesson other nations seem to be learning. There's only a small handful of countries with worldwide tax systems and that group is getting smaller every year.

Japan in 2009 and the United Kingdom in 2010 shifted to a territorial tax regime and lowered their statutory corporate rates. The U.K. did so to stop companies from moving their headquarters abroad; Japan was primarily interested in encouraging its multinationals to reinvest foreign earnings at home.

Professor Desai closes with a broader point about how it's good for the American economy with multinational firms earn market share abroad.

...it is mistaken to demonize the foreign operations of American multinationals as working contrary to the interests of American workers. Instead the evidence, including research by C. Fritz Foley, James R. Hines and myself, suggests that U.S. companies succeeding globally expand at home—contradicting the zero-sum intuition. Demonizing multinational firms plays to populist impulses today. But ensuring that the U.S. is a great home for global companies and a great place for them to invest is actually the best prescription for rising median wages.

Amen. You don't get higher wages by seizing ever-larger amounts of money from employers.

This is why we should have a territorial tax system and a much lower corporate tax rate.

Which is what Wayne Winegarden of the Pacific Research Institute argues for in Forbes.

Mr. Winegarden also makes the key point that a company that inverts still pays tax to the IRS on income earned in America.

Let's now return to the specific case of Pfizer.

Veronique de Rugy of the Mercatus Center explains in National Review why the entire inversion issue is a classic case of blame-the-victim by Washington.

Almost 50 companies have chosen to “invert” over the last ten years. More than in the previous 20 years. ...there are very good reasons for companies to do this. ...for American businesses operating overseas, costs have become increasingly prohibitive. ...Europe now sports a corporate-tax rate below 24 percent, while the U.S. remains stubbornly high at 35 percent, or almost 40 percent when factoring in state taxes. ...it’s the combination with America’s worldwide taxation system that leaves U.S.-based corporations so severely handicapped. Unlike almost every other nation, the U.S. taxes American companies no matter where their income is earned. ...So if a U.S.-based firm does business in Ireland they don’t simply pay the low 12.5 percent rate that everyone else pays, but also the difference between that and the U.S. rate.

Veronique explains why Pfizer made the right choice when it recently merged with an Irish company.

That’s a sensible reason to do what Pfizer has done recently with its attempt to purchase the Irish-based Allergan and relocate its headquarters there. The move would allow them to compete on an even playing field with every other company not based in the U.S. Despite the impression given by critics, they’ll still pay the U.S. rate when doing business here.

And she takes aim at the politicians who refuse to take responsibility for bad policy and instead seek to blame the victims.

...politicians and their ideological sycophants in the media wish to cast the issue as a moral failure on the part of businesses instead of as the predictable response to a poorly constructed corporate-tax code. ...Clinton wants to stop the companies from moving with an “exit tax.” Clinton isn’t the first to propose such a silly plan. Lawmakers and Treasury officials have made numerous attempts to stop businesses from leaving for greener pastures and each time they have failed. Instead, they should reform the tax code so that businesses don’t want to leave.

Let's close with an observation about the Pfizer controversy.

Perhaps the company did make a "mistake" by failing to adequately grease the palms of politicians.

Consider the case of Johnson Controls, for instance, which is another company that also is in the process of redomiciling in a country with better tax law.

Brent Scher of the Washington Free Beacon reports that the company has been a big donor to the Clinton Foundation, which presumably means it won't be targeted if she makes it to the White House.

Hillary Clinton has spent the past few months going after Johnson Controls for moving its headquarters overseas, but during a campaign event on Monday, her husband Bill Clinton said that it is one of his “favorite companies.” ...He described Johnson Controls as “one of my favorite companies” and praised the work it had done in the clean energy sector during an event in North Carolina on Monday. ...Johnson Controls has contributed more than $100,000 to the Clinton Foundation and also partnered with it on numerous projects over the past eight years and as recently as 2015. Some of the Clinton Foundation projects included multi-million commitments from Johnson Controls. Bill Clinton pointed out in his speech that his foundation has done business with Johnson Controls—something that Hillary Clinton is yet to mention.

Given the sordid way Washington works, the folks at Johnson Controls may have made a wise "investment" by funneling money into the Clinton machine, but they shouldn't delude themselves into thinking that this necessarily protects them. If Hillary Clinton ever decides that it is in her interest to throw the company to the wolves, 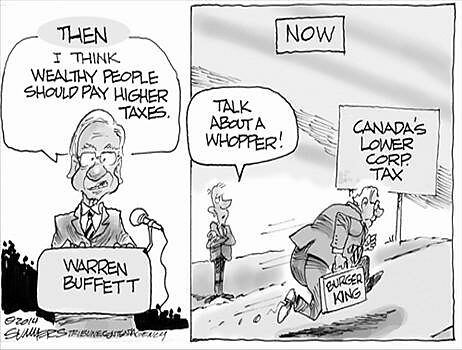 I strongly suspect she won't hesitate.

Though it's worth pointing out that Burger King didn't get attacked very much by the White House when it inverted to Canada, perhaps because Warren Buffett, a major Obama ally, was involved with the deal.

But wouldn't it be nice if we had a reasonable tax code so that companies didn't have to worry about currying favor with the political class?