The PowerPost section of the Washington Post bills itself as “Intelligence for Leaders.” The January 24 print edition carried an article titled “More Americans are alarmed about climate change, polls say,” by Dino Grandoni. On the next page, an op‐​ed by two University of Pennsylvania faculty, Cary Coglianese and Mark Neavitt, blamed last year’s hurricanes Florence and Michael, as well as the California fires, on climate change.


The assertions made in both pieces are quite testable.


Post: “A third, and perhaps most important, reason [for heightened concern] is the spate of nasty weather events in recent years, which include the sort of massive wildfires in the Western United States and intense hurricanes in the Atlantic that many climate scientists expect to become more common in a warming world.”


Facts: We are living in a warming world, and we are also living in a world with no demonstrable increase in the power and/​or frequency of tropical cyclones. 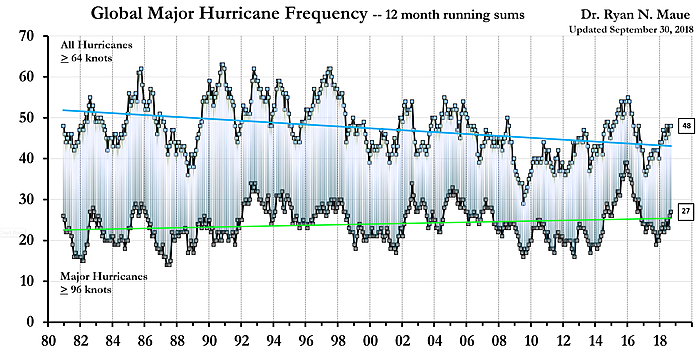 
The perception that hurricanes are increasing in power comes in part from the 2014 “National Assessment” of climate change effects on the U.S., from the U.S. Global Change Research Program (USGCRP), which clearly cherry‐​picked hurricane data. Although records go back much further, it emphasized the increase in activity from 1980 through 2009. At the time of publication, they could have extended data through 2013, which would have shown that activity reverted to its 1980 level. Here is that data in perspective: 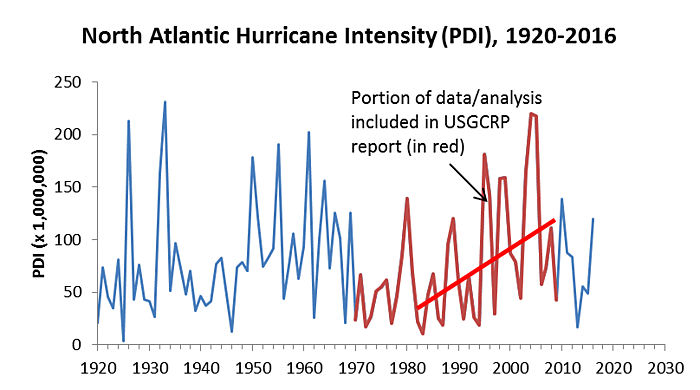 Figure 3. North Atlantic Hurricane Intensity, expressed as the Power Dissipation Index. It is very clear that the 1980–2009 period was hardly unique and very similar to 1940 through 1960, which saw a similar increase in activity. From the 2016 book “Lukewarming,” page 172.


Then there is the matter of wildfires. While California Governor Jerry Brown blamed the massive Camp Fire in Paradise on global warming, that was thoroughly debunked by University of Washington atmospheric scientist Clifford Mass, writing that global warming

has little impact the Camp Fire and many of the coastal California fires of the past few years (e.g., the Wine Country Fires of October 2017). And blaming global warming takes attention away from the actions needed to prevent such tragedies from happening again.

As Mass notes, the fire that destroyed Paradise, and most large California fires, are driven by strong easterly winds created by the atmospheric pressure difference between seasonal high‐​pressure systems in the Great Basin and the California coast, which should become less with global warming. In northern California these are called Diablo winds, and in the south they are the Santa Ana’s.


Ah, but surely the tinder‐​dry vegetation that fueled the Camp Fire was made more flammable by heat and drought. Again, no. Using real data instead of rhetoric, Mass demonstrates that in virtually every summer, California surface vegetation dries out the same amount as it did in 2018.


There is one thing Grandoni’s article got spot‐​on, and it’s the last two paragraphs:

That greater concern about climate change identified in both surveys is a return to the past. In November 2008, when Barack Obama was first elected to the White House, 70 percent of Americans said the issue of global warming was personally important to them.


It was only when Democrats tried to pass cap‐​and‐​trade legislation aimed at addressing greenhouse gas emissions that the concern plummeted by 14 points in 2010.

In fact, cap‐​and‐​trade only passed in the House, and then a net of 63 seats—and the majority—switched from Democrat to Republican in the 2010 election.


Will there be a similar “return to the past” if the House passes a carbon tax as a part of some Green New Deal? For sure it will never get through the Senate, just as in 2010, and it will be used against the House majority, just as it was then.